Dictionary of English Idioms. Do you know the origin of the expressions ‘as mad as a hatter’ – ‘to cut the mustard’ – or ‘a mess of pottage ‘? I knew the first one, because it comes from my home town, Stockport in Cheshire UK, where milleners went slightly bonkers from the use of mercury in hat manufacturing. [And if the expression also reminds you of Lewis Carrol, we’re not far from Dewsbury where he was born.] 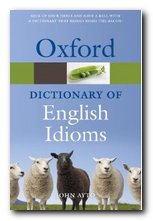 This is another of OUP’s cheap and cheerful specialist dictionaries, containing 6,000 idioms, alphabetically arranged by key word, and covering metaphorical phrases, familiar quotations and proverbs, and similes. It provides meanings for well-known idioms such as set the world alight, cost an arm and a leg, once in a blue moon, and many more. A date of origin is often given and many entries are supported by illustrative quotations from sources as varied as the Bible, the Spectator, and the novels of Agatha Christie.

The collection covers expressions from British English (the man on the Clapham omnibus) as well as American English (cut to the chase) and quite a few from Australian English (give someone Bondi). Full of fascinating facts, this dictionary is ideal for anyone with an interest in the origins of words and phrases. Arrangement of words alphabetically by key word means easy browsing.

As a work of reference, it will probably be of most use to someone trying to improve their English, or someone trying to become more intimately acquainted with those parts of a language which cannot be absorbed by knowledge of vocabulary and grammar alone. How else for instance would a foreigner learn the meaning of raining cats and dogs? But ultimately it will be attractive to anyone interested in the origins of the colloquial and quirky byways of the English language.

Idioms are fixed phrases which are only meaningful as a whole.

Native speakers learn them and remember them as a complete item, rather than a collection of separate words.

Idioms often break semantic conventions and grammatical logic – as in I’ll eat my hat [I’ll be amazed if …].

The object of the verb ‘to eat’ is conventionally something edible, but as part of this idiom it is something definitely inedible.

Non-native speakers find the idiomatic side of any language difficult to grasp.

Native speakers of a language acquire idioms from a very early stage in their linguistic development.

NB! You’re getting this advice straight from the horse’s mouth.

Idioms are generally impossible to translate between languages, although some families of languages use idioms based on identical ideas.

In French, for example, the idiomatic phrase ‘mon vieux’ is parallel in its meaning with the English ‘old chap’.

Idioms very often contain a metaphor, but not always. For example, ‘How do you do’ is an idiomatic greeting but it is not a metaphor.

Idioms are not always used or recognised by the whole of the language community. Sub-groups of speakers employ idioms peculiar to themselves.

Teenagers, occupational groups, leisure groups, and gender groups all employ idioms or special phrases. These will mean something within the context of the group and its communication.

Idiom also determines the way that certain combinations of words make meaningful statements, but not others.

For instance, we are ‘in a quandry’ but ‘at a loss’; we are ‘out of sorts’ but ‘in low spirits’; whereas the expressions ‘at a quandry’ or ‘in sorts’ would have no meaning in English.