Never Let Me Go (2005) is the sixth novel by Kazuo Ishiguro, the Anglo-Japanese writer, who was shortlisted for the Booker Prize which he had won previously in 1989 for The Remains of the Day. The novel was adapted for the cinema in 2010 by Mark Romanek for a film with the same title starring Keira Knightly. 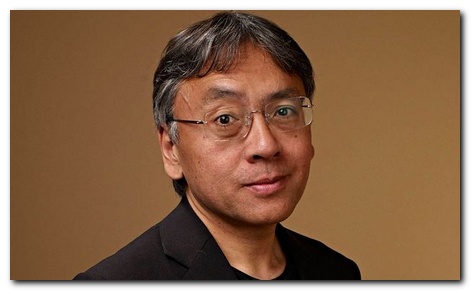 Kazuo Ishiguro was born in Nagasaki in Japan in 1954. His father was an oceanographer who moved to live in Britain in 1960. Kazuo attended grammar school in Surrey, then studied English and Philosophy at the University of Kent in Canterbury. After a gap year touring America and Canada, he entered the creative writing programme at the University of East Anglia, where his tutors included Malcolm Bradbury and Angela Carter. He graduated with an MA in 1980 and became a British citizen in 1982. He has written novels, screenplays, stories, and the lyrics to songs for the Anglo-American jazz singer Stacey Kent. He has won several literary awards, including the Winifred Holtby Memorial Prize for his first novel A Pale View of Hills (1982), the Whitbread Prize for An Artist of the Floating World (1986), and the Booker Prize for The Remains of the Day (1989). He was awarded the Nobel Prize for literature in 2017.

A dystopia is the opposite of a utopian view of the world. Utopian narratives imagine successful, harmonious, and happy worlds, whereas a dystopian world emphasises all its worst elements and even exaggerates them as a form of warning about what we might become if these elements are not held in check.

Because these dysfunctional worlds do not exist but are creations of the imagination, there is a great deal of overlap with the imaginary worlds of science-fiction.

Some novels may even combine elements of both Utopia and Dystopia to create satires of society – such as Jonathan Swift’s Gulliver’s Travels (1726) and Samuel Butler’s Erewhon (1872).

One of the main problems in a novel of this length is the quality of the narrative voice. Ishiguro takes the naturalistic rendering of his protagonist’s first person account to almost unbearable lengths of tedium. Her narrative is packed with repetition, cliché, dated teenage slang, and manufactured uncertainties.

She talks in what one reviewer called “a sort of social worker’s drone, all professional cant and washed-out idiom (‘When it came down to it … Anyway, I’m not making any big claims for myself.’)

There are too many events and incidents that have little structural significance, and that are inflated beyond any sense of their intrinsic interest. In the later part of the book for instance there is a protracted excursion to Cromer in Norfolk which promises to reveal something significant about the ‘possibles’ – people from whom the characters might have been cloned – but this comes to nothing when they decide they have made a mistake.

Much is made of a cassette tape containing Kathy’s favourite song which gives the novel its title – Never Let Me Go – then its unexplained disappearance, followed by a search for its replacement. But none of this, including the title, is linked in any significant way to the central issues of the novel.

Similarly, there is an outing to visit an abandoned boat on the marshes, the type of incident which in most stories would be at least metaphoric, if not symbolic of something important within the meaning of the novel as a whole. But the tediously extended episode adds nothing to what we already know.

Conversely, there is an attempt to give significance to what are no more than teenage arguments, changes in allegiance, and feelings of isolation. But these fail to be convincing, because they remain no more than adolescent trivia which contribute nothing to any narrative interest. But this issue does raise another point.

It’s possible that Never Let Me Go was produced quite deliberately as a genre novel for the teenage market, but Ishiguro has done himself no favours by presenting his story in such a banal and repetitive narrative voice, and packing the story with largely inconsequential behaviour – without exploring any of the ramifications of the scientific conceit on which the novel is based.

We now know that advances in microbiology and DNA manipulation now permit animal matter to be cloned. In this sense the novel is not very ‘futuristic’. But the idea of cloning human beings specifically (and at risk of their own death) to provide body parts to keep other people alive – is a sinister form of modern human sacrifice.

The problem is that Ishiguro simply does not examine the social or scientific rationale for this practice. Nor does he explain how individual humans can be clone-created to have normally functioning body parts (apart from reproductive organs) yet be so singularly lacking in will, imagination, and resistance.

The main problem is that whilst it is possible to suspend disbelief and accept the authoritarianism behind cloning and genetic engineering. there is no plausible reason offered why the characters should be so totally passive and accepting of their planned destinies.

These are characters who watch television, drive cars, have lots of sex, and read Daniel Deronda, yet who show no enterprise when they are free to walk away at any time from their planned organ donations. The organisation that has created them has even gone out of business by the end of the novel, but at no point do any of them think to regard themselves as autonomous beings.

Chapter 1. Kathy H introduces herself as a ‘carer’, and recounts her early years at what seems to be an authoritarian boarding school called Hailsham and her concern for an outsider youth Tommy.

Chapter 2. She describes daily life at the school and further instances of teasing and bullying on Tommy, who retreats into a childlike state.

Chapter 3. Tommy tells Kathy about a conversation with sporty and butch ‘guardian’ Miss Lucy who sympathises with his lack of creative ability. Kathy recounts how the controller of the school, called Madame, is frightened of contact with the students, even though she appropriates their artworks for her private ‘gallery’.

Chapter 4. The students are given tokens in exchange for their work which they can exchange at occasional ‘Sales’. They all appear to have problems with missing memories. Kathy’s friend Ruth makes her into a ‘secret guard’ of Miss Geraldine, a favourite guardian.

Chapter 5. Surrounded by menacing woods at the school, the secret guards plot to kidnap Miss Geraldine. There is rivalry between Kathy and Ruth about favouritism.

Chapter 6. Rivalries and ‘secret knowledge’ continue to cause tensions. Norfolk is regarded as a ‘lost corner’ of Britain. Smoking is forbidden at the school because the students must preserve their ‘special’ natures. Kathy plays her tape of Never Let Me Go. She knows that she and all the other students are infertile. The tape goes missing, but Ruth presents her with an alternative.

Chapter 7. Miss Lucy reveals to them that they have been bred as DNA clones and organ donors. It appears that their body parts are detachable.

Chapter 8. Kathy reports on sexual activity amongst the students, including her friends Tommy and Ruth, and her own preparations to have sex with Harry.

Chapter 9. Miss Lucy retracts what she has previously told Tommy about creativity not being important – and then suddenly disappears when she is expelled from the school.

Chapter 10. After leaving Hailsham, Kathy transfers to the Cottages with Tommy, Ruth and others. They imitate each other’s gestures, then Kathy and Ruth quarrel.

Chapter 12. Veterans at the Cottages, Chrissie and Rodney report back from a trip to Cromer where they have seen a possible original for Ruth, who then begins to fantasise about her ‘dream future’ working in a modern office.

Chapter 13. A month later five of them go on an excursion to Cromer where the two veterans Chrissie and Rodney ask the rest about the rules for requesting a ‘deferral’ of two or three years before they become organ donors. Nobody knows the rules.

Chapter 14. They locate Ruth’s ‘possible’ in an office on the High Street, then see her again later. When they follow her to an art gallery they all realise she is not a possible, then argue about going to visit Martin, another ex-veteran.

Chapter 16. Tommy shows Kathy his miniature drawings of imaginary animals, then discusses his gallery theory with Ruth and Kathy. Ruth claims that they find his drawings laughable, which creates unpleasant tensions in relations between the three friends.

Chapter 17. Kathy tries to resolve these tensions by talking to Ruth. During the conversation Ruth suggests that Tommy disapproves of Kathy’s sexual promiscuity. Shortly afterwards Kathy decides to leave the Cottages and start her training.

Chapter 18. Some time later Kathy is working independently as a carer. She bumps into Laura, an old friend from the Cottages. They discuss Ruth, and Laura suggests that Kathy become Ruth’s carer. It transpires that Hailsham has closed, which makes Kathy feel cut off from her former fellow students. She does become Ruth’s carer, but there are still tensions between them. Ruth persuades Kathy to take her to see a boat – which is an opportunity or an excuse to see Tommy.

Chapter 19. Ruth and Kathy visit Tommy at the Kingsfield centre and take him to see the boat. They discuss their donors, some of whom have ‘completed’ (died) during the operation. They see an advertising poster which recalls the trip to Norfolk, then Ruth reveals that she has had sex with others besides Tommy. She wants Kathy and Tommy to be a couple and apply for a deferral, and also suggests that Kathy become Tommy’s carer. She dies shortly afterwards during her second donation.

Chapter 20. Kathy becomes Tommy’s carer and starts having sex with him. He starts drawing his animal pictures again, but not so successfully. Kathy has located the Madame, whom they plan to visit to request a deferral.

Chapter 21. They visit the Madame where Tommy explains his theory of the gallery. The Madame understands but does not admit to its validity. However, she produces Miss Emily, the head guardian, in a wheelchair.

Chapter 22. Miss Emily reveals to them that the idea of deferrals is merely a false rumour she has been unable to extinguish. She claims that the art works were taken to prove to doubters that the students did have souls, and were being well educated. She explains the post-war history of the ‘movement’ which has now been brought to a halt because of a scandal which has resulted in a lack of sponsors. The Madame explains her sympathies for their plight as donors. On their way back, Tommy gets out of the car and goes into a rage in a field.

Chapter 23. Tommy is preparing for his fourth donation when he suggests to Kathy that she should no longer be his carer – and he dies shortly afterwards, leaving her to face an uncertain future.

When We Were Orphans – Amazon UK

An Artist of the Floating World – Amazon UK