La Veneziana (1924) is a wry variation on the type of story made popular by E.T.A. Hoffmann and Theophile Gautier, in which the distinctions between fantasy and reality become blurred. Nabokov had already used this strategy earlier the same year in The Thunderstorm and he would use it again in his 1938 story The Visit to the Museum. He never seems completely at ease in this literary genre, but La Veneziana is rescued by having a credible (and amusing) realistic basis on which the smaller element of fantasy is based.

The story was written in September 1924, and remained unpublished and untranslated during Nabokov’s lifetime. It was eventually translated by the author’s son Dmitri Nabokov for the collection Collected Stories Vladimir Nabokov published in New York by Alfred A, Knopf in 1995. 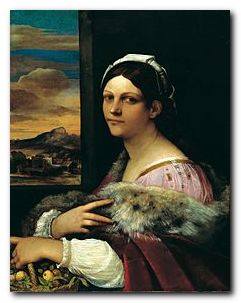 The story was written in 1924, but was never published in Nabokov’s own lifetime. It first appeared in 1995 as part of the collection The Stories of Vladimir Nabokov published in New York by Alfred A. Knopf in a translation by Dmitri Nabokov. However, it is difficult to believe that the translation is one that Nabokov would have entirely approved.

The prose style is far too florid, over-developed, and encrusted with the sort of baroque vocabulary (olivaster, umbral, levigate) that only emerged in his later works. It also has the occasional lapse into cliché (“coming apart at the seams”) and clumsy un-idiomatic English (“goggled his eyes”) which spoil the fluidity of his otherwise supple prose style.

Since so much tampering and polishing to improve effects went on with texts in the Nabokov family (by father, mother, and son) one can only suspect that Dmitri embellished his father’s work prior to its first publication. Without access to the original manuscript (and a knowledge of Russian) it is difficult to prove, but it seems to me that the current text does not genuinely represent Nabokov’s literary style of the early 1920s when he was first establishing himself as a writer of short stories for newspapers and magazines.

There are nevertheless some fine touches in the story. It captures flawlessly the enervating tedium and conventionality of the English country house weekend, with its rituals of fixed meal times, tennis games on the lawn, and reading twenty year old copies of the Vetinary Herald on a wet afternoon.

There are also some early twists of narrative strategy which are unlikely to be later additions by an over-enthusiastic filial hand. Nabokov addresses his readers directly, and even includes teasing comments about their interpretive abilities.

He also comments with authorial hauteur on his own rhetorical devices – setting up in mid-story a night watchman who sees a light on in the castle after midnight. Every convention in fictional narrative suggests that he will therefore uncover what is going on and reveal the culprit. But Nabokov has him not only ignore the anomaly, but go back to bed and miss the exit of the family Rolls Royce motor car, which is also being appropriated for Frank’s elopement.

Thus the pleasant, innocuous old fellow, like some guardian angel, momentarily traverses this narrative and rapidly vanishes into the misty domains whence he was evoked by a whim of the pen.

The painting in the story is clearly modelled on the portrait of Dorotea by Sebastiano del Piombo. Simpson’s contemplation of the portrait is an accurate description of the original:

Her dark eyes gazed into his without the sparkle, the rosy fabric of her blouse set off with an unhabitual warmth the dark-hued beauty of her neck and the delicate creases under her ear. A gently mocking smile was frozen at the right corner of her expectantly joined lips. Her long fingers, spread in twos, stretched towards her shoulder, from which the fur and velvet were about to fall.

Nabokov draws three levels of suggestive parallels between Maureen and the portrait. The reason for the similarity between them is that Frank has painted the fake and is enamoured of the picture restorer’s wife.

The playful fantasy of stepping into a painting is maintained cleverly throughout. Simpson is a naive visionary, given to ‘auditory hallucinations’ and clearly out of his depth in the milieu of the story. He is deeply enamoured of Maureen, but she is beyond his reach socially and emotionally, so he is forced to pursue her image into the painting rather than in the castle grounds.

Having ‘entered’ the painting, he feels that he becomes trapped there: “he gave a jerk and got stuck, feeling his blood and flesh and clothing turning into paint, growing into the varnish, drying on the canvas”.

Next morning, when McGore restores the canvas, he tosses the old rags (soaked with the paint of Simpson’s image) into the garden – which is rather neatly where Simpson awakens. Switching back into realism rather than fantasy, the story reveals that Simpson had fallen asleep in the garden the night before.

The end of the story offers a completely rational explanation of how the events came about – with the exception of the lemon – “Thus the dry, wrinkled fruit the gardener happened to find remains the only riddle of this whole tale” – which is Nabokov’s playful manner of tying the story back to its literary origins.

A group of five people are assembled at an English country estate for a weekend party. The Colonel its owner is an art collector; Frank is his talented and glamorous son; Mr McGore is an art connoisseur accompanied by his attractive and much younger wife Maureen; and Simpson is a gauche but visionary young university friend of Frank’s. They play tennis; Frank flirts with Maureen, and the Colonel admires his recently acquired Venetian masterpiece by Sebastiano del Piombo.

Simpson is deeply attracted to Maureen, and struck by her similarity to the woman Dorotea in the painting. McGore explains to him that it is possible, with sufficient empathy and effort of will, to temporarily enter the world of a painting.

The Colonel reproaches his son for the dalliance with Maureen, which makes Frank believe that Simpson has betrayed him. Simpson is upset by the coldness that develops between them, but late at night he makes the imaginative effort required to enter the painting and join Dorothea, who gives him a lemon from her basket.

Next morning the Colonel discovers that Simpson’s figure has mysteriously appeared in the painting – the explanation for which is that Frank has painted it there, and indeed has produced the entire painting itself as a fake, the sale proceeds from which he has shared with McGore, giving him enough to run off with Maureen. Simpson is found asleep in the garden – but he does have with him a lemon.