compilation, theory, use, and language change

A History of Dictionaries is a brief account of how the recording of language has changed over time. Many people believe that except in terms of size, all dictionaries are more or less the same. But in fact they vary according to who compiles them, when they are compiled, and what purpose they are designed to serve. Lynda Mugglestone’s study of the history and techniques of creating dictionaries deals with what information can be presented in printed form and the difficulties of choice for accuracy and efficiency in covering the spelling of a word, its pronunciation, stress, etymology, and use in various contexts. The challenge of squashing all this into a small space is the reason why dictionaries are printed in narrow double columns, usually in a small font size. 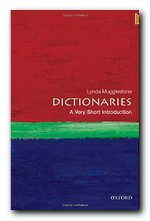 Some people want a dictionary to offer guidance on acceptable usage and notions of grammatical correctness. But the current trend towards descriptive approaches to use (what is, rather than what should be) confounds these expectations. It also has the knock-on effect of meaning that new dictionaries are required at an increasing rate, to keep up with changes in language use.

The earliest dictionaries (from 2000 BC onwards) were not necessarily organised alphabetically, but in themes or topics – and were primarily used as explanations of ‘difficult’ words used in religious documents – not as repositories of language in common speech and writing.

And the first dictionaries in English were largely explanations in English and French of Latin terms – because all three languages in the early period of Renaissance Britain were in use at the same time for different purposes – religion, political administration, and commerce. In fact multi-language dictionaries were the norm at that time.

The Dutch writer Noel de Berlaimont’s Vocabulare would, for instance, become a topically organised work in four languages (French, Flemish, Latin, and Spanish) by 1551, and six languages by 1576 when English and German were added.

Any mono-lingual dictionaries that existed were compiled solely in order to explain unusual terms or words which people found difficulty in understanding. Indeed, the idea that a dictionary should include all words in common use is a relatively recent development from the nineteenth century – and almost all dictionaries still exclude the words most commonly in use – swear words.

Next Mugglestone considers how a dictionary is made – the whole range of questions about what is to be included and how it is to be shown on the page (or screen). She examines the work of possibly the world’s best known lexicographer, Samuel Johnson, revealing both his very subjective choices and the strength of his method in choosing quotations from printed sources as his supportive evidence.

More recently, the use of computers working on corpora (huge databases of language in current use) mean that dictionary compilation is far less subjective, can include both the spoken and the written word in their source material, and most importantly can include word definitions decided by the actual context in which they are used:

This also throws up what she calls the etymological fallacy, which is the mistaken notion that a word’s meaning is principally determined by its origins. But alternative (which comes from the Latin ‘the other one of two’) can now mean any one of a number of options. The same applies to media used as a singular grammatical concept.

I was glad to see that she touches on issues of political correctness and the ideology of dictionary compilation. This covers not only archaic definitions such as that for canoe – ‘a kind of boat in use among uncivilized nations … Most savages use paddles instead of oars’, and loaded definitions such as Christmas – ‘The day on which the nativity of our blessed Saviour is celebrated’.

Following the logic of her own historical trajectory, she concludes by looking at the strengths and weaknesses of the (apparently) ultimately democratic dictionaries – Wiktionary and Urban Dictionary. The latter is strong on innovation and slang, the former is more traditional. Both are free – but they have not displaced printed versions – for which the demand continues unabated.