reprint of the classic first edition

Fowler’s Modern English Usage was first published in 1926. It was an immediate commercial success, selling 60,000 copies in its first year, and it went on to become the most influential set of guidelines on grammar and the use of the English language of the twentieth century. There were later versions revised by Sir Ernest Gowers in 1965 and Robert Burchfield in 1996, but this is a facsimile of Henry Fowler’s original first edition, with an introduction by the linguist David Crystal that sets it in context. 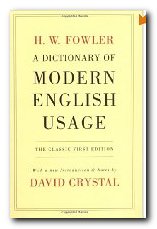 It’s reproduced photographically from the original – so the entries are arranged in two columns on the page, which was the style for books of this kind at the time. This presentation strikes me as doubly appropriate, because it captures the old-fashioned nature of the original, and it accurately reflects the slightly pedantic tone of the contents. Fowler is not unlike his great lexicological predecessor Samuel Johnson in issuing his judgements wrapped around with ironic asides, which makes for interesting reading.

David Crystal’s introductory essay explains how the book came to be published, and how Fowler was an important transition figure between the old, traditional proscriptive grammarians and the new more tolerant descriptive schools which were to follow.

Strangely enough, Fowler, whose name has become a metonym for his Dictionary, is often used by prescriptivists as an authority to support their arguments – when the fact is that his work as a whole reflects a flexible, subtle, and relativist attitude to language and the way it is used.

Fowler deals with all the classic problems in English language, such as the which/that dilemma, the split infinitive, and ending sentences with a preposition. He covers issues that are difficult even for native speakers of English (such as the who/whom issue).

The central problem is the question of usage. If enough people say different from does that make it right? Fowler was working in the days before any giant collections of real data were being used as a source of evidence to support linguistic claims. And he was using printed sources, not spoken, which today are regarded as primary.

However, it’s difficult to predict if he is going to be prescriptive or relativist on any single topic. Crystal points out that there are plenty of inconsistencies within the Dictionary. On some issues Fowler accepts widespread common usage; at others he asserts that something is right or wrong based on nothing more than his own opinion.

It should be said that the Dictionary is not merely a listing of words and their definitions, as in the normal sense of the term. It’s a compendium of how terms are used grammatically, the problems they pose, and the cultural baggage that surrounds them. A typical entry which captures both his stern sense of what is right and his ironic attitude in trying to correct it is as follows:

aggravate,   aggravation. 1. The use of these in the sense of annoy, vex, annoyance, vexation, should be left to the uneducated. It is for the most part a feminine or childish colloquialism, but obtrudes occasionally into the newspapers. To aggravate has properly only one meaning—to make (an evil) worse or more serious. The right & the wrong use are shown in:   (right) A premature initiative would be calculated rather to a. than to simplify the situation; (wrong) The reopening of the contest by fresh measures that would a. their opponents is the last thing that is desired in Ministerial circles. It is in the participle (and a very stupid, tiresome, aggravating man he is) that the vulgarism is commonest.

You can probably find copies of the first edition Fowler in the few remaining second hand bookshops – but it’s nice to have this reprint to put it back into general circulation again.