>> Home / Archives for The Visual Display of Information

The Visual Display of Information is the earliest of the three books on information design which Edward Tufte has written, designed, and published himself. In it he develops his theory of “a language for discussing graphics and a practical theory of data graphics” The first chapter plots the rise of data maps, which he claims didn’t really develop properly until the late seventeenth century, and then took off in the nineteenth – from which he gives some very elegantly illustrated examples. The centrepiece of this section is Charles Joseph Minard’s time chart of Napoleon’s retreat from Moscow. This shows in a really interesting manner the devastating reduction in the size of the army plotted again geographic location and ambient temparature. It is a fascinating mixure of three levels of information rendered as a graphical image.

Graphical excellence is the well-designed presentation of interesting data – a matter of substance, of statistics, and of design. 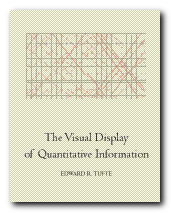 I was surprised to find how his writing is even more compacted and elliptical than in a book such as Visual Explanations written nearly twenty years later. Here he writes of a map “achieving statistical graphicacy, even approaching the bivariate scatterplot”. You’ve got to be prepared to hack your way through a lot of this sort of thing.

In a discussion of the integrity of graphical data and statistics that lie he gives examples from Britain’s national debt during the war of American Independence – which show graphs going up whilst the truth goes down. This is very convincing – though I couldn’t easily get used to his habit of referring to ‘data’ in the plural.

He has the interesting notion that ‘data-ink’ ought to be minimised. In other words, any information will stand out more clearly the less printing is done to present it.: “The number of information-carrying dimensions depicted should not exceed the number of dimensions in the data”. You’ve got to be prepared to leap from traffic deaths and government expenditure to the properties of chemical elements, and be prepared for lots of detail on the difference between boxplots, bar charts, histograms, and scatterplots.

He’s basically in favour of simplifying representation – reducing what he calls ‘chart-junk’. That is, anything which does not contribute to revealing information. Yet there remain strange contradictions. One of his edicts (which seems sensible) is that “Graphics can be shrunk way down – Many data graphics can be reduced in area to half their currently published size with virtually no loss in legibility and information.” Yet he often presents examples of bad (but visually attractive) graphics across double page spreads. And he’s not bashful. When it comes to naming one of his own designs (a list of voting patterns in the 1980 US elections) it becomes not a mere list but a ‘SUPERtable’.

But this is a stimulating and attractive production. I was surprised that there wasn’t a formal bibliography, but he chooses to foreground his references directly into the generous page margins as a design feature. He developed a graphic style for this book which he has stuck to ever since. The basic formula is beautiful illustrations, some occupying a whole page, with the relevant text condensed in a crisp and economic style. No topic exceeds a double page spread, and the book is produced from very high quality paper, printed like a work of art, and bound as if it were a rare first edition.