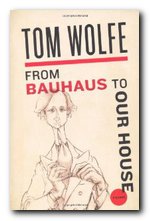 from abstract expressionism to op art and minimalism

The Painted Word is a companion piece to Tom Wolfe’s other book-length critical essay on architecture, From Bauhaus to Our House. This time his target is the world of modern American painting, the way reputations are established, and how the world of art has been turned into a form of commodity investment. His arguments are based upon the observation that the world of contemporary art is based upon two very small elite groups. First the artists themselves, who make radical visual statements scorning bourgeois values. Second  their very rich patrons, who court contemporary chic fashion with a similar purpose. There is in fact an even smaller third group – the critics and theorists – but they are counted along with the first.

He adds for good measure the fact that as artistic reputations are established by the interactions between these groups, the general public plays no part in the process whatsoever. The focus of his critique is on New York, but he argues that the same forces are at play in any of the world’s (few) centres for modern art – be they London, Paris, or Tokyo.

He sees modern art post second world war as an ever more rapid flight from the tradition of realistic painting towards the ultimate dead end of an art based upon nothing but theory. The first stage of this trajectory is the arrival of abstract expressionism with artists such as Willem de Kooning, Franz Klein, and Jackson Pollock.

They ditched figurative painting and were urged on by critics such as Clement Greenberg and Harold Rosenberg, who spoke of ‘”essences” and “purities” and “opticalities” and “formal factors” and “logics of readjustment”  and God knows what else’. Wolfe reserves some of his most amusing yet scornful remarks for the wilful obscurity of such ‘criticism’.

The influence of this group was quickly replaced by the arrival of Pop Art in the 1960s, fuelled by painters such as Jasper Johns, Robert Rauchenberg, and Roy Lichtenstein

Pop Art was packed with literary associations … It was, from beginning to end an ironic, a camp, a literary-intellectual assertion of the banality, emptiness, silliness, vulgarity, et cetera of American culture, and if the artist said, as Warhol usually did, “But that’s what I like about it” – that only made the irony more profound, more cool.

You can see the direction and the end goal of this argument. The next stage was to remove any painterly skill altogether, and reduce the subject to nothing more than words on paper – which gave us Conceptual Art.

It’s an argument which still holds good today, even if the names have been changed to Jeff Koons, Tracy Emin, and Damien Hirst.