>> Home / Archives for Where Wizards Stay Up Late

Do you know who invented the Internet? No, it wasn’t Al Gore – even though he once foolishly claimed he did. And in fact, it wasn’t just one person. What this fascinating documentary study reveals is the teamwork, the complementary technologies, and even the engineering competition which led to its development. It also dispels the notion that the innovation was fuelled by cold war defence concerns about possible nuclear attack. 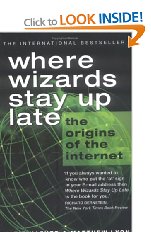 The majority of early adopters were research scientists in particle physics who simply wanted access to each other’s work. At first it was just a few research departments of US universities which linked themselves. The computers were huge mainframe affairs, and the results at that time still came through on punched tape. There were no mice or monitors, no Windows, and even the tiny amounts of memory were laughably small by today’s standards.

It’s amazing to realise how recent all these developments have been. It also emphasises the fact that this major innovation was a result of simultaneous developments in a number of separate disciplines, and one which came out of the sort of team work and democratic ethos which have left their mark on the Net to this day.

Katie Hafner and Matthew Lyon’s account adopts a lively documentary approach to telling the story of how it all happened. The writing is much influenced by Tom Wolfe’s new journalism, with rapid character sketches, cliff-hanging chapter endings, use of dramatic understatement, on-the-spot point of view, and lots of well-researched technical detail. Having said that, it’s not always an easy read. The names of engineers and scientists come in thick and fast, and the chronology jumps around bewilderingly in the sixties and seventies – but what emerges is a fascinating picture of many technological developments eventually pulled together to deliver what was in fact the birth of the Internet.

There’s a wonderfully dramatic moment when all the strands are pulled together in a contract submission to run the network – the computers, the wired links, and what emerges as the heart of the Net – packet-switching technology. This was invented simultaneously by Donald Davies in the UK and Paul Baran in the US. It allows information to be broken up into small units, transmitted, then reassembled without loss at any other part of a distributed network.

Their timescale stops short in the 1970s – which means the story doesn’t include anything on the World Wide Web – and strangely enough there’s very little mention of people such as Vannevar Bush or Ted Nelson. Their focus is all on the often wacky individuals and the college-boy teams who went on to become the Founding Fathers, though I was also glad to see that they give electrical engineers their due.

Other more well-orchestrated histories of this revolutionary development may be written in the future, but this one will be difficult to beat in the short term as an account of the skills, the drama, and the sheer inventiveness of these Net pioneers. There’s a full bibliography and a good index, so it’s no surprise that this title has been chosen as a set text on one of the Open University’s most popular ever courses – ‘You, your Computer, and the Internet’.