The Awkward Age first appeared as a serial in Harper’s Weekly in 1898-1899 and then as a book later in 1899. It was written during the same period as What Maisie Knew (1896) and The Turn of the Screw (1898) in which the innocence of the young is threatened by the behaviour of the adults amongst whom they live. The novel was written in the late phase of James’s career, just after the period of his disastrous experiments in the theatre, and it seems to bear the traces of a theatrical conception. The narrative is progressed largely through conversation between the characters, and each ‘book’ of the novel’s structure is based in a single location. There is very little action in the conventional sense of that term: people simply visit each other’s sitting rooms and talk over tea.

James’s purported main issue is the vulnerability of Nanda, surrounded as she is by a variety of dubious adult influences. But she is not the dramatic centre of the narrative. James focuses his attention on the inconsequential issues of how much one adult character knows about another, or what fleeting liaison from the past might resurface to cause embarrassment.

At the start of the novel we are led to believe that Nanda is in need of protection, since she is surrounded by such bad influences in her parents and their friends – but by the end of the novel she has become as scheming and duplicitous as they are.

James tries his best to be funny in his introductions of characters, but they are not properly or fully realised and not dramatised, despite the presentation of the story via conversations – as on a stage.

He goes to endless lengths in spinning a web of subtleties regarding social relationships – but the characters are so vacuous and insignificant that there is little incentive for the reader to keep track of it all. Page after page is filled with vapid posturing, insincere flattery, snobbish one-upmanship, desperately contrived bon mots, and strained metaphors.

Lots of energy is expended by the characters making very oblique references to other people, usually via the use of ambiguous pronouns. It is not clear who they are talking about – both to readers and their interlocutors. Their references are mis-interpreted as part of the conversation and have to be spelled out and explained. The novel would be at least one third shorter if the characters made the subjects of their statements clear.

They also converse using the sorts of extended metaphors which James normally employs as a third person omniscient narrator in his other novels. Their conversations are extremely mannered and quite improbably unrealistic.

The principal concerns of the characters are class anxiety, money, and the marriage market. There is also the concern for social status, property, and income common to the literature (and society) of this period. Characters take endless trouble to determine how much capital and annual income other people might have, as a clear indicator of their social worth and their potential for forming more profitable alliances.

Social indicators of the changing nature of society at the end of the nineteenth century include women smoking and using slang, and members of the upper class having to rent out their country houses to generate income. There is also repeated concern for what people are permitted to call each other – that is the use and prohibitions of using forenames only, nicknames, or formal titles. These seem very much a signal of social strain as the Victorian period came to an end.

What is slightly unusual in The Awkward Age is the fact that two important characters are sufficiently close to the bottom of their social class that they need paid employment (albeit in the form of sinecures). Vanderbank is a civil servant, and so is Edward Brookenham – his position having been bought with his wife’s influence.

The relationship between the elder Mr Longdon and the much younger Vanderbank is shot through with homo-erotic undertones. Both of them are bachelors. Longdon has failed to marry, despite his previous relationships with women – one of whom is Vanderbank’s mother. The elder man ‘takes a fancy’ to the younger, and in a sense tries to ‘procure’ Nanda for him by offering to supply her dowry. The revelation scene where Longdon makes his financial proposal regarding Nanda is full of sexual innuendo and double entendres. It takes place late at night, just as they are about to go to bed, with the younger man lighting the elder’s candle for him.

It is difficult to escape the sense that in this novel (and others of the late period) that James was wrestling subconsciously with his own latent homo-eroticism, which we know was a sub-text to his later years. He seems to put in play the alternative prospects of heterosexual marriage and bachelorhood in order to find good reasons for retaining the default setting of remaining single.

Mrs Brookenham and her husband Edward are the centre of a social group of upper-class people in London. Their daughter Fernanda has become of marriageable age, but has not yet been introduced into society. Nevertheless, she has young married women as friends, and this is considered by some as rather dangerous in terms of her limited knowledge of the world. 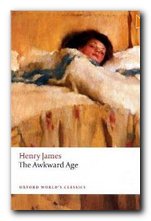 When Mr Longdon is introduced to their social circle, he is amazed at how closely ‘Nanda’ resembles her grandmother, with whom he was once in love. Mrs Brookenham decides to introduce Nanda into adult society, with the hope that she will secure a rich husband, preferably Mitchy, who is only the son of a shoemaker, but very wealthy. The first half of the novel is spent in exploring exactly what the characters know of each other’s intentions. It also establishes Mrs Brookenham as a vivacious and manipulative woman who wishes to influence the lives of those around her for her own advantage – including her own daughter.

The plot (as such) starts mid way through the novel when Mr Longdon, moved by the similarity between Nanda and her grandmother, decides to bestow a substantial amount of money on her as a form of dowry. He reveals this in confidence to Vanderbank, hoping that he will offer to marry her. Instead, Van reveals the offer to Mrs Brookenham and to Mitchy.

Mitchy is porevailed upon to marry Aggie, which he does in order to please Nanda, with whom he is in love. When his marriage turns out to be disappointing, he solicits Nanda, who keeps him at bay by palming him off onto her mother.

We are led to believe (by the conventions of the realist novel) that Nanda is in love with ‘Van’, but when asked she denies the fact, and although Van flirts with her, he never declares a serious interest. Nanda is therefore left with only a dubious and ill-defined relationship with Mr Longdon, and at the end of the novel she is planning to go on a protracted holiday with him.