The Birthplace was first published in the collection The Better Sort in 1903. It is collected in Volume XI of The Complete Tales of Henry James (Rupert Hart-Davis) 1964. 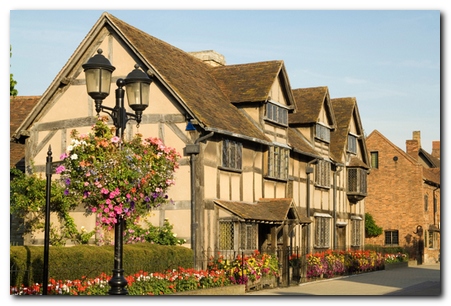 On the surface this appears to be a mildly amusing satirical dig at what we now call the ‘heritage industry’. Tourists and particularly foreigners flock to see the birthplace of a famous person in the hope that having seen some object or been in the same room as that person, they will thereby have some sort of transcendental experience that will provide them with a deep understanding of art, writing, philosophy, or other cultural value.

Maurice Gedge is appalled that the previous wardens (represented by Miss Putchin) and the visiting ‘pilgrims’ are interested in the place but not in the Work. They wish to see the birthplace, but are not interested in what the person born there created. And in Shakespeare’s case, even the authenticity of the birthplace is in doubt, since so little is known about him.

Rather cleverly, without ever naming him, James uses Shakespeare as a hook on which to hang his general argument. Very little is known about Shakespeare’s life, but the trustees wish to squeeze every ounce of cultural capital out of the smallest possible association.

It is this that Maurice Gedge rebels against, and then in an ideological volt-face to save his and his wife’s jobs, gives way to. He gives the pilgrims what they have come for – a cultural warm shower of half truths, romantic myths, and cultural platitudes.

But the story also contains within it a quite serious element of literary theory. It’s known as ‘the death of the author’ and was first made famous in 1967 by the French literary critic Roland Barthes. The theory, put in a very over-simplified form, is that there is no possible way to prove any causal link between authors’ lives and the works they produce. Therefore we should concentrate our critical attention onto the works themselves, not their authors. The novelist D.H. Lawrence put it another way when he said “Trust the tale, not the teller”.

That is the theory discussed between Maurice Gedge and Mr B.D. Hayes on the occasion of his first visit. Hayes quotes from Hamlet: “‘The play’s the thing’. Let the author alone.” Then he pushes the point further: “There should really, to clear the matter up, be no such Person”. And Maurice Gedge agrees: “There is no such Person.”

So – sixty-plus years before such ideas became formalised into what is now called ‘critical theory’, James was exploring the relationship between the Author and the Work. It has to be said that he was very resistant to any intrusions into his own private life, even though he had (until almost the end) very little to conceal. So it was a subject very dear to his heart.

The Birthplace – eBook at Project Gutenberg

The Birthplace – read the story on line

Part I. Maurice Gedge, a librarian and failed schoolmaster, is given the opportunity by a sponsor to become warden of Shakespeare’s birthplace (though Shakespeare is never actually named). Gedge and his wife start reading the Works and are determined to uphold the honour of His name.

Part II. Gedge is inducted into his custodial duties by one of the previous wardens, Miss Putchin. It becomes apparent that she (and the visitors) are more interested in the place as something like a holy shrine, rather than the famous person who lived there, or what he actually wrote.

Part III. Gedge takes to wandering round the house late at night to imbibe its spirit – but he realises that very few of its contents have any true connection or relationship with the Great Man. They are simply associated memorabilia, and the traces of previous visitors (or ‘pilgrims’ as they are called) in objects and signatures they have left behind.

Part IV. He begins to feel oppressed by the role he is required to play – trotting out ‘facts’ in which he does not believe in response to the demands of tourists. And he worries that the trustees might ‘inspect’ him and find him fraudulent. He tries to persuade his wife that they ought to admit the truth – that there are very few hard facts and very little evidence for all the claims being made about the place. She disagrees and argues that they ought to enhance the myths.

Part V. One day a young American couple arrive and Gedge finds that the husband agrees with him – that attention should be focused on the work of the great poet, and certainly not on such dubious items as the room where it was claimed (on no evidence) where he was born.

Part VI. Gedge feels his critical sense bolstered by this encounter, but he allows his scepticism to show through to the public. His original patron arrives as a representative of the trustees to give him a severe warning about ‘spoiling the show’. Gedge agrees to his wife that he will change his approach in order to protect their jobs.

Part VII. Over a year later, the young American couple visit again. Gedge is apprehensive, but he realises that they must have come to see him, since they know his views. He puts on a bravura performance as a tourist guide, full of clichés and gushing trivia. It turns out that his fame for delivering this sort of thing has spread across the Atlantic. Now he worries that he might be overdoing things in performing this deceit, but his sponsor arrives and doubles his salary in recognition of the increased income from receipts at the Birthplace.