The Black Mate was written, according to Conrad’s own reckoning, in 1886. This would make it his earliest tale or short story (though it is not so short). But it was not published until 1908, and was then republished posthumously as part of the collection Tales of Hearsay in 1925. The other stories in the collection were The Warrior’s Soul, Prince Roman, and The Tale.

The tale starts in first person narrative mode. The un-named narrator is a friend of the mate of the Sapphire Winston Bunter, and he is present in the restaurant conversation where the story begins. In fact Conrad rather coyly signals his presence in his own account of events.

There was also a very young shipmaster, with a little fair moustache and serious eyes, who said nothing, and only smiled faintly from time to time.

But on Bunter’s voyage aboard the Sapphire to Calcutta and back, events are presented in third person omniscient narrative mode, with the thoughts and feelings of the secondary and tertiary characters fully expressed.

Then when Bunter nears home and his wife inherits the money, the narrator suddenly reappears to present the conclusion to the story as a first person narrative again.

Conrad offers no explanation of how the information in the central part of the story reaches us, nor any persuasive logical reason why there should be two narrative modes at work in the one tale.

None of this would be terribly important were it not for the fact that Conrad has become celebrated for his inventive use of narrators and the complex structure of his tales and novels. But the fact is that he often makes mistakes in the logic and the narrative paths by which information reaches the reader – and this is an early example of that weakness, which is worth noting.

He also sometimes plays fast and lose with the conventions of tale-telling – as he does here. The narrator knows perfectly well at the outset of the tale why Bunter’s hair is so black, yet he conceals the fact from the reader with teasing hints that Bunter has a secret (without revealing what it is). In fact it is the narrator who advises Bunter to dye his hair in the first place. This device reduces the story to not much more than an elaborate and delayed joke.

A number of sea captains meet at a restaurant in the Port of London. They tease Captain Johns, who thinks that only young seamen should be on ships. Then they discuss ghosts and comment on Bunter, the mate of the Sapphire who once lost a ship in the Indian Ocean and who has strikingly black hair.

Bunter complains to the narrator that Captain Johns has been treating him suspiciously, and has been trying to persuade him to share his belief in ghosts and spiritualism. He has also been oppressed by a berthing master who recognises him from somewhere. It seems that Bunter has some sort of secret, as well as the bad luck that has dogged him ever since the loss of his ship. He has been a captain, but is now forced to accept the position of mate.

The Sapphire sets off bound for Calcutta, and encounters rough seas in the Southern Ocean, which results in breakages of some of Bunter’s personal belongings. Captain Johns continues to harass Bunter with his belief in spiritualism and he regards any signs of scepticism as a personal insult. Then one night Bunter suddenly falls down a ladder and injures his head. There is a general mystery regarding the reason for this accident. When he recovers he tells Captain Johns that he was startled by an apparition and fell backwards in terror.

Bunter continues to be ill, and he is converted to a belief in spiritualism. Then he reveals that the fright has turned his hair white.

Meanwhile, back in London Mrs Bunter inherits money from a distant relative but cannot pass the good news on to her husband because the Sapphire is en route back from Calcutta. She goes to meet the ship at Dunkirk, along with the narrator.

In Dunkirk, Bunter reveals to the narrator that he merely slipped on some brass plates at the top of the ladder, and his hair turned white because he ran out of the hair dye he had been using to make himself look younger. The ghostly apparition was an invention to placate Captain Johns. Bunter leaves the Sapphire and goes off with his wife. 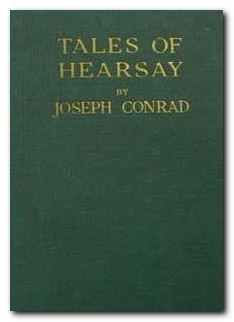