>> Home / Tutorials / James - Tales / The Friends of the Friends

The Friends of the Friends (1896) is one of the many variations of ‘a ghost story’ that James wrote in his late period. It was originally entitled The Way it Came for its first appearance in the May issue of Chapman’s Magazine of Fiction then renamed when published in the New York Edition of James’s novels and tales which appeared in 1907-1909. Neither title seems to really summarise or capture the story in a satisfactory manner. 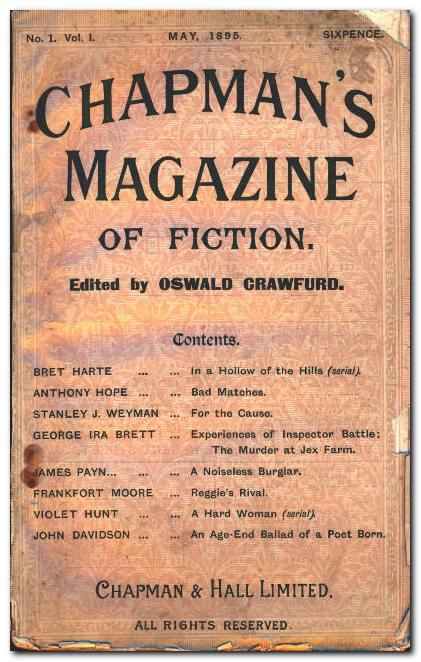 Those with a penchant for supernatural interpretations have sufficient evidence here to provide a coherent reading of the tale. This rests on the notion that some people have the capacity to conjure up an apparition of a person who is in fact dying in a different location. It happens to the man in the story, who was ‘visited’ by his mother in Oxford around the same time that she is dying in Wales.

If we take that as a credible possibility, then the idea that he ‘sees’ his fellow clairvoyant late at night when she appears in his rooms is merely another example of the same phenomenon. After all, she appears, then disappears. They do not speak to each other.

The female inner-narrator guesses – it would seem correctly – that he has been deeply touched by the experience, and bases her subsequent rejection of him on this curiously supernatural infidelity, especially as he subsequently admits to its continuing.

But this interpretation rests on believing the inner-narrator’s interpretation of events. She believes that the woman was dead at that time. But the man does not. He claims it was a visit from the woman herself, fully alive. He is even able to describer her appearance (the three feathers in her hat).

It’s also possible to see the supernatural events from another perspective – that of the ghosts’ point of view. The female inner-narrator sees the man’s mother and her woman friend as sharing a capacity to make appearances before the man: “a strange gift shared by her with his mother and on her side likewise hereditary”. This interpretation puts the supernatural capacity onto the dying figure, rather than the person to whom they appear.

Interpretation of the story may come down to which account of events seems more plausible – that of the man or the female inner-narrator. It is quite feasible that the woman called to see him whilst she was still alive – though it seems rather unlikely that two people would meet under such circumstances without speaking to each other.

On the other hand, if we accept that the two ‘visitations’ by the dying parents are credible, then the inner-narrator’s claim that the man had seen and communed seriously with the woman’s ghost at the same time as she was dying has the force of logic to it. If he can see one ghost, why not another? Or as the inner-narrator sees it, her woman friend shares a hereditary capacity for ghostliness with the man’s mother.

But another element which should be taken into account is that the inner-narrator can be seen as one of James’s many emotionally unstable and possibly unreliable narrators who he created around this time. She can certainly be seen as a precursor of the governess in The Turn of the Screw. She is predisposed to jealousy even before her two friends meet each other; she manipulates and deceives both of them; she accuses her fiancé of a very peculiar form of infidelity, and of course she does not name either of them or herself in her written account of events.

The one-sided frame of the narrative is cast in the form of a letter or memo, written by the outer narrator to a publisher, who has asked him to look through the papers of a woman who has died. This is another example of a James tale which begins with the death of its protagonist. The story is in fact a retrospective, and we tend to forget whilst reading that the principal character no longer exists in the fictional time frame.

In fact the term ‘framed narrative’ is slightly misleading in such cases. In its original sense it was used to describe stories which were given some sort of introduction and conclusion. The story itself was therefore a fiction within a fiction.

For example, Joseph Conrad’s famous novella Heart of Darkness begins and ends with a group of sailors talking on board a ship, waiting for the tide to turn. One of them, Marlow, recounts his experiences which constitute the main events of story. But the introductory passages set the scene, and the conclusion returns to the same point, on board the ship, thereby completing the frame. It is worth noting that Conrad, like James, uses an un-named outer-narrator to introduce Marlow as the inner-narrator.

One remarkable feature of this story is that none of the characters in it is given a name. It’s true that there are only three principal characters – the inner narrator, plus her woman and man friend, but as the outer-narrator comments, they are given ‘neither name nor initials’.

The Friend of the Friends – study resources

The Friends of the Friends – Oxford World Classics edition – Amazon US

The Friends of the Friends – Vintage Classics edition

The Friends of the Friends – read the book on line

The Friends of the Friends – eBook formats at Project Gutenberg

A woman has two friends (a man and a woman) who both have the same supernatural experience of witnessing the appearance of a parent who at the very same moment is dying in another location. The woman thinks that they would like to meet each other so as to compare their experiences. However, both of them prevaricate over making the necessary arrangements.

The initial woman eventually becomes engaged to the man, and sets up a rendezvous between her two friends. But when she learns that the other woman’s husband has suddenly died she has a jealous fear that their common experience might draw them close to each other. She sends a message delaying the meeting with her fiancé until dinner later the same day.

The second woman visits the first in the afternoon as planned, and predicts that she will never meet the man, even at the forthcoming wedding. When she has gone, the man visits for dinner and the woman guiltily confesses her deception, then promises to do the same for her friend.

Next day she goes to Richmond, only to discover that her friend is dead. She goes back to report this to the man, who reveals that the woman visited him after he got back from dinner the night before. He claims that they never spoke, but he was very struck by her presence.

He cannot produce any concrete evidence that this visit took place, so the woman tries to convince him that he has seen a ghost – as he did when he witnessed the apparition of his mother. He tries to reassure her, but she feels jealous of the affect her friend has had on him.

The other woman is buried, but as the date of the marriage approaches the first woman feels that the friend has come between them, and eventually accuses her fiancé of ‘seeing’ her privately every evening, something he is unable to deny. So she calls off the marriage and they separate. Six years later he dies, and because his demise is sudden and inexplicable, she feels that he has gone in a ‘response to an irresistible call’.