The Madonna of the Future first appeared in The Atlantic Monthly for March 1873. It was reprinted two years later as part of James’s first book, The Passionate Pilgrim and Other Tales, published by Osgood in Boston, 1875. It became a very popular tale and was frequently reprinted in collections of James’s stories. 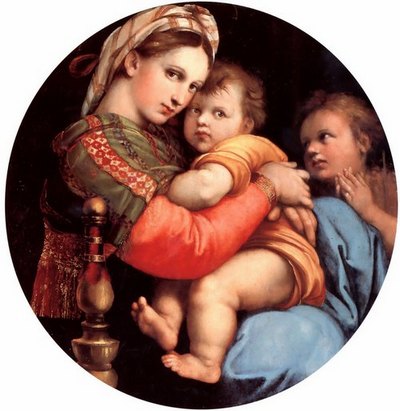 The Madonna of the Future – critical commentary

James wrote a number of stories about art, artists, their achievements, and their reputations – both whilst alive and after their death. The Madonna of the Future is about a would be artist. Theobald has an enormous reverence for the world of Art, and Italian Renaissance painters in particular. He is well informed about the history and the technical details of what they have produced.

He takes what we would now call a high romantic view of art – that an appreciation of its values offers entrance into a quasi-religious and transcendental realm which can sustain the individual even whilst they might live in reduced circumstances or even poverty. This is a view of art which John Carey discusses at some length in his study What Good are the Arts?

Theobald has worshipped at this shrine of art for years and years – and he gives a very persuasive account of his enthusiasms in the face of the narrator’s more sceptical, materialist view of art appreciation. But there are two problems with Theobald’s position. The first is that he has no real creative life force, and the second is that he has been living ‘in denial’ with his plan for the ultimate art work.

His idea for the ideal Madonna has been gestating for two decades, but no fruit has been borne. And this is reflected in his relationship to Serafina. She might have been a virgin-like Madonna (with child) when he first met her, but now she is an old woman. She clearly gets by via her association with ‘visiting gentlemen’ – which is perhaps as close as James could come in the 1870s to implying that she was a prostitute.

What makes the story admirable is the well-sustained pathos of Theobald’s characterisation, and his ultimate tragedy in defeat of an unrealised dream. There is no bitterness or schadenfreude in the story. Mrs Coventry is quite right: Theobald has been telling everybody about his grand scheme, but has produced nothing.

Yet the fact that the narrator follows him into his dream and into his poverty lends a sympathetic pathos to this character sketch of a clearly deluded man. James wrote about artists who could not paint, authors who could not write, great thinkers who could only talk – and yet he was enormously productive himself, for the whole of his fifty year creative life span.

The Madonna of the Future – study resources

The Madonna of the Future – eBook formats at Gutenberg

The Madonna of the Future – plot summary

An un-named outer-narrator relays the account of an inner-narrator (H—) in which he describes a youthful visit to Florence. When viewing the sculptures in the Palazzo Vecchio, he is accosted by Mr Theobald, a man who enthuses about the spirit of the place and its general artistic heritage. He is an American and claims to be an artist with standards so fastidious that he has not sold or kept a single picture.

Next day the narrator meets him again in the Uffizi gallery. Theobald continues to rhapsodise about Art, and when they proceed to the Pitti Palace the narrator himself is full of enthusiasm for Raphael’s picture The Madonna of the Chair. Theobald takes an idealist, almost metaphysical view of art criticism, whereas the narrator offers a more materialist interpretation of the picture – that pretty young women were fashionable at the time the portrait was painted. Theobald’s reply to this becomes a prescription for what could be done in the present historical phase. The narrator guesses that he is in fact describing his own aspirations.

The two men meet every day for the next fortnight, and the narrator continues to be astonished by Theobald’s enthusiasm, his knowledge, and his commitment to the world of high Art.

However, Mrs Coventry, a long-time American resident and patronne in Florence informs the narrator that Theobald is a talentless dreamer in whom people have given up believing. He claims to be painting a Madonna which will be a composite of all previous masterpieces of the Italian school.

The narrator invites Theobald to an opera, but he refuses and instead invites the narrator to meet Serafina, the most beautiful woman in Italy, who acts as his model. The narrator is disconcerted to find that she turns out to be an unexceptional and rather stout woman who is no longer young. Theobald reveals that she was an unmarried mother who he rescued and has maintained ever since, following the death of her child. He is also shown Theobald’s portrait sketch of the child, which he admires.

When Theobald asks the narrator his opinion of Serafina, he tells him quite honestly that she is old. This stark honesty shocks Theobald, who realises that he has spent years deceiving himself. The narrator feels slightly guilty for bringing him to this realisation, and encourages him to finish the long-awaited portrait of Serafina as Madonna. Theobald is crestfallen, but vows to finish it in a fortnight.

Theobald then disappears, so the narrator goes back to Serafina’s apartment in order to locate him. She is entertaining another man – who is a vulgar and pretentious artist of trashy objects. Serafina defends Theobald as an honourable friend of twenty years standing, and gives the narrator his address. The other visitor tries to sell the narrator the tasteless statuettes he makes.

When the narrator visits Theobald, he finds him in miserably poor conditions, He is also paralysed with inactivity in front of an empty canvas. He realises that for all his theorising, he has no creative power whatever. The narrator looks after him, but he collapses in a brain fever and dies. After the funeral, the narrator meets Serafina in a church, where she implicitly reveals to him that she is a prostitute.