The Ordeal of Gilbert Pinfold (1957) is something of a curiosity in the work of Evelyn Waugh. It is usually classed as a novel, but has more of the characteristics of a novella. Quite clearly it is autobiographical in origin, and in essence it has only one character – Gilbert Pinfold himself. In this sense it can also be regarded as a psychiatric case study – except that the condition it dramatises was eventually diagnosed as a pharmacological, not a psychological problem. It continues Waugh’s fictional strategy of combining serious problems with dramatic irony and comic misunderstandings. 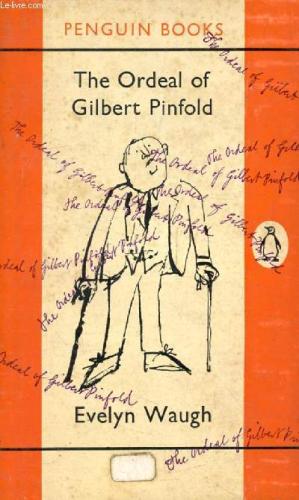 The Ordeal of Gilbert Pinfold – commentary

The publication could easily be classed as a long story. It deals essentially with one person’s experiences. It starts with the onset of his problems in a domestic English setting. It follows his escapist travels and the intensification of his psychic dramas. Then the narrative returns to its starting point and the solution to his problems. Pinfold is cured, and he decides to write the book we have just been reading.

None of the secondary characters have any real substance, and some of them do not even exist. In this sense it is simply a yarn or a tale whose principal interest is the depiction of a mental disorder from the sufferer’s point of view – and the comic consequences to which this breakdown leads.

To regard it as a novel raises problems. As an account of Pinfold’s psychological difficulties it lacks substance, since the majority of the drama is composed of imaginary events. After a perfectly credible opening, the story drifts into a dreamlike state which lacks the concrete reality that is normally part of a realistic novel.

More importantly, there is no acceptable explanation given for the resolution of the psycho-somatic tensions Pinfold is suffering. His physical pains suddenly and inexplicably disappear half way through the story, and the hallucinations evaporate just as suddenly when he reaches home. No reason is given for their origins or dissolution.

This might be the result of using personal experience as the material of what purports to be fiction. The events of the story are very closely based on Evelyn Waugh’s own ‘mid life crisis’ during which he undertook a sea voyage in an attempt to cure writer’s block. He also suffered from a form of persecution mania and delusions.

The cause of these problems was eventually identified as poisoning brought on by his heavy use of drugs and alcohol. As soon as his medication was changed, the hallucinations disappeared completely. There is no comparable resolution provided within the text. The story simply ends with the sort of ‘It had all been a dream’ conclusion to a schoolchild’s creative writing exercise.

But a stronger case can be made for considering it as a novella. It has unity of theme, unity of tone, and unity of character. It also has a neat triangular structure. The story begins with the origins of the drama in an English country house. Its central section deals with the development of Pinfold’s ailments during a sea voyage. And the problems are resolved on finally returning home.

This is simply an alternative view of the same literary material. It suggests a formal coherence in the events of the story, but it doesn’t provide the logical inevitability normally expected from narratives in the form of a novella. This essential element of formal resolution, unfortunately, is missing.

The Ordeal of Gilbert Pinfold – Penguin – Amazon US

Gilbert Pinfold is a successful middle-aged author with conservative views and habits. He lives privately on an estate in what seems to be the West Country. He has problems sleeping, drinks heavily, and takes barbiturates. Following an unpleasant interview by the BBC, he finds his memory playing tricks.

He decides to go somewhere hot to finish his latest book. Despite being in ill health and unable to complete everyday tasks, he continues to drink heavily. On board ship he begins to lose track of time and starts having hallucinations. He loses social control at dinner, then overhears a riot on deck – which is severely quelled by the captain.

After lunch the next day he hears the trial and torture of a crew member coming from the captain’s cabin. The crewman dies. Following this, the pains in Pinfold’s legs suddenly disappear.

He hears a radio broadcast criticising his work as a novelist, then at the dinner table thinks to challenge the captain by raising the subject of murder. He stays awake to check that the captain does not dispose of the crewman’s body at night. Then he overhears two drunken youths who are threatening to beat him. The youths wake up other passengers, all of whom have criticisms of Pinfold.

Next morning Pinfold hears two girls planning to give him presents. The two loutish youths begin to taunt him again. They accuse him of being homosexual, a German (Peinfeld), a Jew, and a communist. Pinfold plans to bring them to trial in the ship’s lounge.

As the ship nears the Mediterranean, Pinfold learns that an international conflict has arisen over possession of Gibraltar. The captain reveals that the Spanish authorities want to capture a secret agent who is on board. He proposes giving them Pinfold as a substitute. When nothing happens Pinfold wonders if he is going mad, but decides it was all a hoax.

He becomes convinced that all the passengers on board are talking about him. A young girl called Margaret whom he has never met makes amorous overtures to him. Her parents intervene – but only to encourage her to visit Pinfold’s cabin at night. She is urged on by her father in military terms, but nothing happens.

When Pinfold overhears passengers laughing over telegrams he has sent he complains to Captain Steerforth and changes his cabin. He also thinks the practical jokes played on him have been orchestrated by Mr Angel, the man from the BBC who interviewed him.

He decides to thwart Angel’s plans by leaving the ship at Port Said and flying on to Colombo. He writes to his wife explaining the plot against him and signalling his intentions.

In Colombo he continues his conversations with Margaret. His wife sends a cable, urging him to come home. When he does return, the voices pursue him all the way back to London. He meets his wife and the voices stop. When they get home he decides to write The Ordeal of Gilbert Pinfold.