The Papers (1903) is an astonishingly prophetic story. It might have been written in 2013, rather than a hundred years earlier. James deals with all the unsavoury features now associated with contemporary media – cynical journalism, image manipulation, empty celebrity culture, and what we now call ‘spin doctoring’ – but he shows it all alive and working smoothly only two years after the death of Queen Victoria. In fact the opening of the story is unusually bitter in tone, and James quite clearly ventilates his low opinion of ‘the papers’ as he collectively designates them. Yet very unusually (for James) the story has a happy ending. 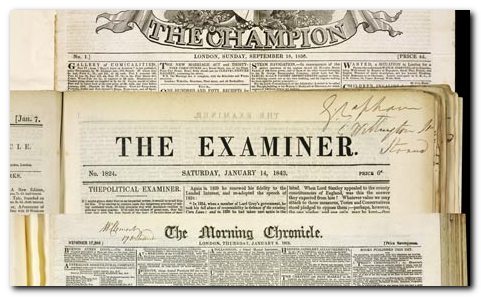 Except for the technological devices of email and mobile phones, this story has all the elements of contemporary journalism, celebrity culture, and media manipulation.

1. Journalists construct news stories out of non-events to satisfy the public appetite for scandal, sensationalism, and dramatic news. Some of Beadel-Muffett’s puffs are satirised to an almost farcical extent, such as his opinions regarding flowers at funerals or the announcement of his presence at insignificant public events. But the creation and manipulation of news is depicted with pinpoint accuracy, operating over one hundred years ago.

2. Celebrities are created out of nothing by the same means – journalists filling newspapers with promotional articles masquerading as news items. The pathetic Mortimer Marshall is swollen with pride at Howard’s article which does nothing more than describe a visit to his home.

3. News develops and is reported at a very fast rate. In the period the story is set, there were morning and evening newspapers, with supplementary lunch-time editions. This was the norm well into the 1960s. Speculations regarding Beadel-Muffet’s whereabouts are expressed in a metaphor of organic growth:

Theories and explanations sprouted at night and bloomed in the morning, to be overtopped at noon by a still thicker crop and to achieve by the evening the density of a tropical forest.

4. Unsuccessful or insignificant social and cultural events are given the ‘oxygen of publicity’. That is, favourable reviews or mentions are produced in order to create artificial ratings of approval.

5. People with money but with no talent or achievement are promoted as successful celebrities – such as Beadel-Muffet and Mortimer Marshall. This is the early twentieth-century version of Hello magazine culture.

6. There is a very close connection between politics and the press. Beadel-Muffet is a member of parliament (even though he hasn’t spoken in the House for years) and Howard Bight has successfully kept his name in front of the public, even though he has done nothing of any significance.

The Papers – read the story on line

Howard Bight is a cynical but successful young journalist with a talent for promoting the interests of would-be celebrities by placing trivial gossip articles in the newspapers. His friend Maud Blandy aspires to do the same but lacks experience and success. They discuss the case of Sir A.B.C. Beadel-Muffet KCB, MP, who is widely publicised via the reporting of completely inconsequential events.

Beadel-Muffet has become engaged to Mrs Chorner, who objects to the publicity attached to his name. Howard offers to help Maud and suggests that she interview Mrs Chorner, which she does, providing her with a faint glimmer of success. Both of them are also besieged by Mortimer Marshall, a would-be dramatist who is desperate for publicity.

When Maud expresses her disappointment at not succeeding more rapidly, Howard offers to marry her, but she does not accept his offer. He writes an empty promotional article about Mortimer Marshall, but increasingly feels that such work is demeaning and worthless.

Suddenly Beadel-Muffet disappears. Howard tempts Mortimer Marshall into an unscrupulous trap, suggesting that he could gain publicity by offering explanations for Beadel-Muffet’s disappearance. Maud suspects that Howard knows something about the case he is not revealing – even the possibility that Beadel-Muffet might be dead. She searches her conscience over their activities and feels increasingly uneasy.

It is then announced that Beadel-Muffet has committed suicide in a German hotel. Howard by this time is tiring of the whole affair, but suggests to Maud that she interview Mrs Chorner again whilst the scandal is at its height. Maud fears that Howard’s part in publicising Beadel-Muffet’s name will come to light in the police inquiry. She interviews Mrs Chorner but does not make use of the results.

Still suspecting that Howard is withholding information, they discuss revealing what they both know – but suddenly Beadel-Muffet reappears. The collapse of the whole scandal confirms both Howard and Maud that this form of journalism is sordid and unrewarding. They agree to both give it up, and she accepts his marriage proposal after all.