The Real Thing was written in 1891 and first appeared syndicated in a number of American newspapers the following year: the Illustrated Buffalo Express, the Detroit Sunday News, the Indianapols News, the Louisville Courier-Journal, and the Philadelphia Enquirer. It also appeared in the English Black and White magazine at the same time. Its first appearance in book form was in The Real Thing and Other Tales published by Macmillan in 1893. It is worth noting that on its first appearance the tale itself carried illustrations, as was quite common with stories and serialised fiction at that time. 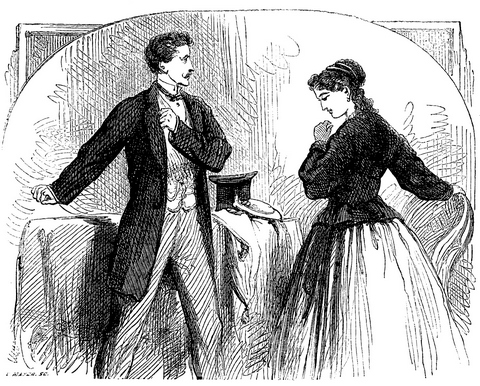 This is a very popular, well-known, and much reprinted tale – possibly because it is so short, so touching, and because it seems to offer an easy glimpse into the theories of art that James wrote about so obscurely in the famous ‘Prefaces’ to the New York edition of his collected works.

Major and Mrs Monarch are truly pathetic figures. They are an upper-class ‘gentleman’ and ‘lady’ who have fallen on hard times after losing their money. They cling to their snobbish notions of class and status – yet they are virtually empty figures. The narrator conceives of them as the products of a purposeless, trite, and conventional lifestyle. They also naively believe that their sense of good manners and visual appeal are marketable commodities – but they are mistaken.

Their humiliating attempts to become useful to the narrator are given an excruciatingly ironic twist when they end up serving tea and acting as housekeepers – in place of the two lower-class figures of Miss Churm and Oronte, who successfully occupy the places as models the Monarchs were seeking.

At an artistic level, this is the ‘success’ of the tale. Major and Mrs Monarch think they are ‘the real thing’ as representatives of class types – and that they will be useful to the narrator in his work as an illustrator. But they lack plasticity; they can only ever be what they are – stuffed dummies with no character at all. Miss Churm and Oronte on the other hand are capable of becoming ‘suggestive’ for the narrator’s purposes, and are visually creative.

In other words, the story illustrates that a superficial appearance of being ‘the real thing’ is not sufficient to guarantee artistic success. The narrator’s drawings using the Monarchs as models are deemed a failure by his friend Jack Hawley and the publisher’s artistic director. But when he reverts to using Miss Churm and Oronte as models, he succeeds and gains the commission for the whole series of illustrated novels.

Chapter I.   Major and Mrs Monarch arrive at the studio of the un-named narrator, a painter of portraits and a magazine illustrator. They are offering themselves as artists models, having fallen on hard times after losing their money. They perceive that there will be a demand for their ideal embodiment of a gentleman and a lady.

Chapter II.   The narrator surmises that they are the product of ‘twenty years of country-house visiting’ – pleasant but empty characters. They have heard that the narrator will be illustrating the first volume of a deluxe edition of an important writer’s work, and they assume that he will need models to illustrate fashionable society types. The narrator is hesitant, but they are desperate and persistent. Whilst there, they disapprovingly meet the narrator’s cockney employee, Miss Churm who is lower-class but a very successful model.

Chapter III.   The narrator uses Miss Churm, who can adapt herself to whatever is required, whilst Major Monarch desperately tries to make himself useful around the studio. But when Mrs Monarch tries to be a model she is too stiff, and is always the same, whereas Miss Churm can become any number of different types. But when the narrator asks Miss Churm to make them all tea, she resents the implied demotion in her status. Suddenly an Italian street vendor turns up, looking for work. The narrator takes him on first as a model and then as housekeeper.

Chapter IV.   The drawings the narrator produces using the Monarchs as models all look exactly the same, whereas Miss Churm and the Italian Oronte lend themselves to his invention. He begins to work on the first novel for the deluxe edition – Rutland Ramsay. His friend fellow painter Jack Hawley dismisses the illustrations featuring the Monarchs as rubbish, and the publisher doesn’t like them either. So whilst the narrator poses Oronte as a model, the Monarchs make tea, in a reversal of roles. The narrator hints to the Monarchs that they are no longer required, but they return, only to offer their services to him as servants. The narrator accepts this arrangement, but then pays them off. He obtains the commission for the remaining books in the series, and feels he has had an interesting experience.