The Return: was completed in early 1897, while Conrad was writing the story Karain: A Memory. It was never published in magazine form; but was collected in Tales of Unrest, which appeared in 1898. The other stories in the collection were Karain: A Memory, The Idiots, An Outpost of Progress, and The Lagoon. 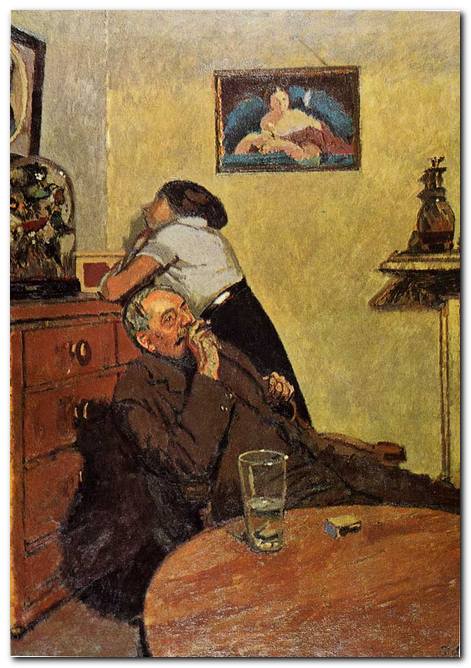 Conrad’s own comment on the story is that “[A]ny kind word about The Return (and there have been such words said at different times) awakens in me the liveliest gratitude, for I know how much the writing of that fantasy has cost me in sheer toil, in temper, and in disillusion.” He also once remarked, acknowledging that he suffered while writing this psychological chef-d’oeuvre of introspection – “I hate it.”

The most striking feature of this story is its similarity in subject and psychological intensity to the scene in The Secret Agent (written almost a decade later) when Adolf Verloc’s wife Winnie realises that he husband is responsible for the death of her mentally-retarded brother Stevie. Verloc is so consumed by his own egotism that he fails to recognise the devastating effect this revelation has on her, and he pleads solipsistically that she should try to see things from his point of view.

Alvan Hervey the protagonist of The Return is a similar monster of smug, self-regarding egoism, and this unrelenting narrative is a superb study in the psychological ravages of jealousy. It explores with relentless force the kaleidoscopic intellectual and psychic responses to emotional shock – particularly the realignment of a sense of identity that is required .

Conrad’s introductory notes to Tales of Unrest discuss the genesis of this tale in a curious mixture of metaphors:

The Return is a left-handed production. Looking through that story lately I had the material impression of sitting under a large and expensive umbrella in the loud drumming of a heavy rain-shower. … Mentally, the reading rendered me dumb for the remainder of the day, not exactly with astonishment but with a sort of dismal wonder … notwithstanding all its apparatus of analysis the story consists for the most part of physical impressions; impressions of sound and sight, railway station, streets, a trotting horse, reflections in mirrors and so on

It is almost as if Conrad is too embarrassed to discuss the real issue of the tale which is the shock of experiencing jealousy for the first time. His comments are also another reminder (if we need one) not to take what authors say about their own work too seriously – or as anything other than one opinion or interpretation.

It’s also interesting to note that Conrad does not include the searing psychological pain of physical, sexual jealousy in Hervey’s catalogue of distress – though at the end of the nineteenth century it is unlikely that explicit reference to such matters would have been acceptable by publishers.

A curious feature of this tale is that it includes three expressions which are the titles of other literary works:

Henry James’s story The Turn of the Screw appeared in 1898, a year later than Conrad’s tale. The term ‘a handful of dust’ crops up in T.S. Eliot’s poem The Waste Land which appeared in 1922, and was also used as the title for Evelyn Waugh’s novel of the same name in 1934. The term ‘watch and ward’ is a traditional expression which means a ‘continuous watch or vigil’. It was used by Henry James for the title of his first short novel published as a serial in The Atlantic Monthly in 1871, then in book form in 1878.

Alvan Hervey is a very conventional person who works in the city of London and commutes from the suburbs. He marries a woman with very little personality and sponsors a literary-political magazine whose editor he regards as an ‘ass’. The couple cultivate writers and establish a weekly causerie in French style. Their house is filled with comfortable furnishings and works of art.

On arriving home early from work one day, he finds a letter from his wife to say that she has left him and gone off with the editor. Hervey is overwhelmed by shock and outrage, and thinks it would have been preferable if she had died. He feels besmirched and humiliated by the passion that the experience raises in him.

He does not know how to understand or deal with the situation, and races through a cascade of different notions in his mind. He moves rapidly from feelings of injured pride, fear, and desolation, to anger, existential anguish, and despair.

Whilst he is in the middle of this powerful shock to his entire system of feeling and belief, his wife comes back to the house. She sits before him without speaking, whilst he asks her banal questions which do not reflect his true feelings. He is trapped in an attitude of false pride and bad faith.

She tells him her letter was a mistake. He criticises the editor, but then it transpires that she has intended going off with him but has changed her mind. He then gradually assumes a self-congratulatory and completely bogus attitude of magnanimity towards her. He thinks back to the occasion of his proposing to her and, lost in self-pity, fails to recognise a gesture of reconciliation she makes towards him.

When she offers to leave he stops her but, it is clear that she realises his protestations are no more than shallow self-obsession, and she regrets coming back to the house.

He starts to lecture her pompously on morality and duty – an appeal which gradually turns into self pity and hectoring condescension. Oppressed by his behaviour, she again tries to leave but he prevents her and accuses her of being mentally unhinged.

He rants on about public duty and his own merciful forgiveness until she begins to laugh hysterically. He throws a glass of water in her face and demands that she think of his feelings. Then he insists that they go down to dinner and argues that everything will be normal again.

When they go to dinner he is obsessed with concealing everything from the servants, and he realises that he does not know what is going on in his wife’s mind. He thinks the same of the two servant girls, and sees all women as ‘unknowable’.

He claims to love his wife, but she explains to him why he doesn’t. At the end of the evening he works himself into a terminal frenzy, convincing himself that there is something deficient in his wife. So he challenges her oppressively, asking her if she is prepared to live with unanswered questions and lack of trust hanging over them. She is willing to do that, but he is not, so he leaves the house – never to return.