The Solution first appeared in the monthly magazine The New Review in three issues between December 1889 and February 1990. It was specially commissioned for the new publication, which was founded and edited by Archibald Grove. The story itself was based on an anecdote related to James by his friend the actress Fanny Kemble. 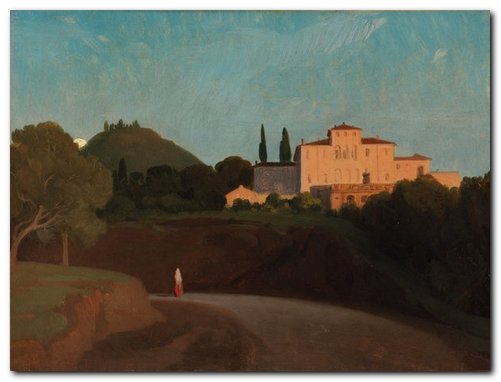 Contemporary readers might find it difficult to appreciate the social nicety which is at the crux of this tale. During a group excursion to a picnic, Wilmerding quite innocently goes for a walk with Veronica, the eldest daughter of Mrs Goldie. They are missing from the main group for some time.

In the nineteenth century (and earlier) the social conventions for contact between men and women were so tightly controlled that for a single woman to be alone with a single man – out of any supervision by a chaperone, a family friend, or any other third party – was considered to be a potential blot upon her reputation.

The inference is clearly a prurient fear of some sexual connection being made, but alongside or even beneath that in the case of the class James was writing about is a financial fear that social capital would be lost. The woman’s reputation could not be converted into real capital via marriage arranged on

Mrs Goldie’s social ambition is to find husbands for her daughters. This is not an easy task, because she herself has no money (compared with people in the circles where she is mixing) and two of her daughters are not attractive.

Veronica alone has the social capital of good looks; but if her reputation were to be sullied by what was considered an episode of improper behaviour, that capital would be lost. This is a situation he had already explored in his famous novella Daisy Miller more than ten years previously.

This is the crux of the trick played on Wilmerding by Montaut and the narrator: they know that he has such an elevated sense of honour that he will be prepared to marry Veronica if he thinks he has placed her in an untenable position.

Wilmerding is an upright and naive American who has found himself out of his depth amidst European social mores. From his republican background, he doesn’t realise the significance of taking an innocent stroll with a young unmarried woman.

The two Europeans, the narrator and Montaut, realise that Wilmerding has unwittingly placed himself in a socially embarrassing position, and they play on his credulity and his sense of honour – the Frenchman Montaut more unscrupulously than the English narrator. .

It is difficult not to see this as yet another variation on the theme of ‘fear of marriage’ which James explored in so many of his stories. We know that James debated with himself the tension between marriage and remaining a bachelor – always coming down on the side of the latter. And this is not even taking into account the homo-erotic impulses to which he eventually gave way later in life.

The story illustrates the danger posed by a pretty face and an unmarried woman. One innocent stroll in the Italian countryside is enough for a man of honour to be entrapped – obliged to proffer marriage when no such gesture was contemplated or intended.

Of course this instance is slightly amusing, because Wilmerding is rescued from his trapped condition by the whiles of a clever woman, Mrs Rushbrook, who simultaneously ‘bags her man’. Nevertheless, he has to pay a price, which Mrs Goldie is happy to seize on.

If you wished to push the ‘fear of women and marriage’ argument even further, you could argue that Mrs Rushbrook not only ‘snares’ Wilmerding, but also relieves him of his money in doing so. So – two women strip him of his independence and his money. Bachelors beware!

James was very fond of the framed narrative – where there is an account of how the story comes about enclosing another more detailed narrative of the story itself. But the ‘frame’ here is not complete. The inner narrator (the un-named diplomat) is already dead when the story begins, and the main narrative is the outer-narrator’s reconstruction of events with ‘amplification’.

It is rather curious that James should take the trouble to create this double sourcing of the narrative when he makes no further use of it after the introductory paragraph. But it is entirely in keeping with his manner of creating stories, as the even more complex example of The Turn of the Screw proves.

The Solution – HTML version at The Ladder

Part I. An un-named narrator, a former officer from the English diplomatic service, looks back to his posting in Rome in the early part of the nineteenth century when he was twenty-three. He mixes with attachés Wilmerding and Montaut from the United States and French embassies respectively in a social life which centres on an English widow Mrs Blanche Goldie and her three daughters.

They visit Mrs Goldie at an afternoon tea-party near Frascati, Wilmerding is missing for some time with Veronica, the most attractive of Mrs Goldie’s daughters. Montant argues to the narrator that this indiscretion obliges Wilmerding to make an offer of marriage to Veronica, otherwise her reputation will be compromised. They disagree, and make a bet on the outcome.

Part II. After the holiday the diplomats reassemble in Rome. The narrator teases Wilmerding for having returned without having made any formal commitment to Veronica. They discuss the subtle differences between American and European conventions regarding single men and women. As something of a joke, the narrator claims that Wilmerding has ‘gone too far’ with Veronica, at which Wilmerding professes complete innocence regarding his intentions.

Wilmerding consults Montant for advice – then suddenly leaves to go back to Frascati. Montant then claims he has won the bet – because Wilmerding will feel obliged to marry Veronica out of a sense of honour. But the narrator rides after Wilmerding, arriving back at Frascati to find that Wilmerding is already engaged to Veronica – so he rides on to seek advice from Mrs Rushbrook, the widow of an English naval officer who he wishes to marry.

Part III. The narrator feels very remorseful that his ‘joke’ has backfired and implores Mrs Rushbrook to help him quash the engagement. She argues that his best recourse would be to offer to marry Veronica himself. The next day the narrator goes to see Mrs Goldie to explain the misunderstanding. She refutes his arguments on the grounds that nobody knows what Wilmerding’s motives are.

She also challenges the narrator to propose marriage himself to Veronica – since although he has no money, he is very well connected and is expected to rise in the diplomatic service. Immediately afterwards, the narrator meets Wilmerding, Veronica, and Mrs Rushbrook, who are all very friendly. Mrs Rushbrook asks for details of Wilmerding’s social background.

Part IV. Back on duty in Rome, the narrator feels embarrassed and avoids Wilmerding. He visits Mrs Rushbrook, who has done nothing to help his secret plan, and thinks Veronica will blossom once she is married. But Wilmerding suddenly leaves Rome, having been rejected by Veronica. Next day the narrator confronts Mrs Rushbrook, who says she has offered her own money to the Goldies to buy off Wilmerding. Mrs Goldie, having come into money, goes off on a world tour. The narrator then reveals that Mrs Rushbrook in fact persuaded Veronica not to marry Wilmerding in exchange for his money – and that she had married him herself.