The Sweetheart of M. Briseux first appeared in The Galaxy magazine for June 1873. It was not reprinted until 1919 as part of Travelling Companions along with six other early Henry James stories, published by Boni and Liveright in New York. 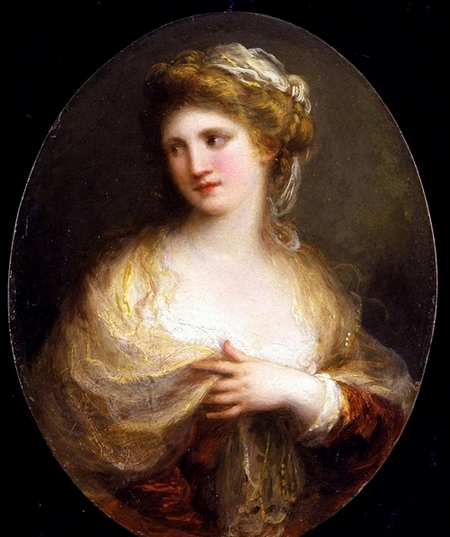 Portrait of a Lady in a Yellow Shawl

This is one of many stories James wrote about art and artists – particularly painters. The premise of the tale is simple enough, and represents a traditionally romantic view of art. Harold Staines is handsome and rich, but he lacks artistic talent. M. Briseux on the other hand is poor and unsuccessful – but he has both artistic insight and skill. Briseux is also a man of principle who turns down an offer of money in order to complete the portrait. The poor but talented artist is something of a cliché which has had a persistently vigorous life ever since it first came into being.

It is echoed here by the complementary cliché of the woman who chooses the poor hero over the rich wastrel. The woman in the portrait refuses Harold Staines when he challenges her, and throws her lot in with the poor Briseux instead. She thereby loses her comfortable position within the Staines family, and is forced to go back to her (poorer) home.

An un-named narrator is looking at paintings in the museum of a French provincial town. The gallery has acquired The Lady with a Yellow Shawl, an impressive work by the best-known local artist, Briseux. The narrator sees a woman in the gallery looking at the picture very intently, and suspects her to be the original subject of the portrait. Later in the day he meets her in the town and she tells him her story, which forms the remainder of the narrative,

She has lived under the protection of Mrs Lucretia Staines, an old friend of her mother. Mrs Staines has a handsome but shiftless son Harold, who decides to become an artist. They all travel to Rome, where he makes copies of old masters. Then he proposes to her, which at first is a delight to her, but then becomes a burden. Mrs Staines however approves the match.

They move on to Paris, where Harold makes copies in the Louvre, The woman delays the marriage, but then challenges him to paint her portrait, after which she promises to settle a date. Harold struggles with the portrait, and one day whilst he is absent from his studio during a sitting, the young painter Briseux appears and denounces the painting as rubbish.

He is hungry and destitute, but very confident about his own talent. She offers to give him money, but instead he finishes off the portrait.

Harold returns and is angry at this interference with his ‘work’: He tells her to leave the studio, but she sees the shabby figure of Briseux as a positive saviour, and that of the handsome Harold as a negative life force. She refuses to move. Harold says she must chose between them: she chooses Briseux, who then finishes off the painting.

She parts from the Staines family and goes back home. Briseux exhibits the picture at the Paris salon and it is deemed a masterpiece which establishes his reputation.