Jorge Luis Borges is one of the few writers to establish an international reputation on the strength of only having written short stories: (Katherine Mansfield is another). In fact because he never wrote any long works, it is often assumed that he didn’t write very much. The truth is the exact opposite: he never stopped writing, and The Total Library, this huge collection of his non-fiction works is only a sample of his vast output. 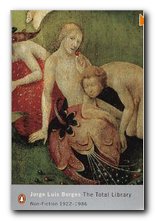 From his earliest years he produced book reviews, essays, lectures, film reviews, prologues, and translations in addition to his now-famous fictions. He even invented literary genres – the essay which is part philosophic reflection and part fiction; studies of imaginary works; and biographies of people who did not exist. This in addition to spoofs, mind games, and metaphysical writings of a kind that seem to transcend national boundaries – which is partly why he managed to establish his international reputation.

Borges’ attitude to the lecture illustrates both his personality and his versatility. In his earlier years he gave ‘lectures’ by sitting on the stage and letting somebody else read out a prepared text to the audience. After he went blind he didn’t write out a text at all, but sat in front of the audience and improvised monologues on his chosen topic. He is an immensely sophisticated playboy of the literary world

This volume is a very wide collection in chronological terms – from his earliest pieces written in the 1920s to fragments written shortly before his death in 1986. It even includes early work he later disowned, but which here has wisely been included. This allows us to follow (in excellent translation) the development of his approach to writing.

It has to be said that his early work is marked by an inflated and pretentious literary style – for instance his habit of trying to impress with paradoxical statements “all the film’s characters are recklessly normal”. He also seems to have adopted a great deal of whimsy from the English authors who were the favourite reading of his earlier years. But this affectation drops away from the early 1930s onwards.

At their most lightweight, some of these pieces are no more than paragraph long observations, but at their best they offer amazingly perceptive analyses based on his encyclopaedic knowledge and love of literature. For instance in the middle of discussing Melville’s Bartelby the Scrivener he persuasively argues that the text prefigures the work of Kafka in its rigorous logic and black humour. This is a perception he elaborated into a full length essay seven years later – ‘Kafka and his Precursors’ (1951) in which he wittily argues that great writers create not only their own works, but also their readers and even their precursors. He illustrates what we now call Kafkaesque elements in the work of Kierkegaard and Robert Browning, then observes:

Kafka’s idiosyncracy is present in each of these writings, to a greater or lesser degree, but if Kafka had not written, we would not perceive it; that is to say, it would not exist. The poem ‘Fears and Scruples’ by Robert Browning prophesies the work of Kafka, but our reading of Kafka noticeably refines and diverts our reading of the poem. Browning did not read it as we read it now. .. The fact is that each writer creates his precursors. His work modifies our conception of the past, as it will modify the future.

There are surprises on nearly every page. Borges repeatedly asserts that whilst James Joyce is a great twentieth century writer, Ulysses and Finnegans Wake are ‘unreadable’. In his film criticism, he pours scorn on King Kong and Now, Voyager (‘Across the screens of the most remote movie houses, the film spreads its bold thesis: A disfigured Miss Davis is less beautiful‘). He defends Rudyard Kipling against his political detractors. And his celebration of Walt Whitman’s Leaves of Grass will make you want to dash out and buy a copy, if you don’t already have one.

There would be a good argument for reading this collection backwards – starting with pieces such as the magnificent essay on ‘The Detective Story’ (1951) or on ‘Blindness'(1977) which is a poetic meditation on the advantages he has gained from losing his own sight – which turn out to be his learning Anglo-Saxon and Scandinavian languages. Work your way in reverse chronological order through his essays on anti-Semitism and the second world war, via the sketches he produced for Hogar (the Argentinean equivalent of Ladies’ Home Journal) until you reach the material he (understandably) disowned. For those who have read his celebrated short stories in Ficciones, Labyrinths, and The Book of Imaginary Beings, this collection is a welcome addition to understanding a fascinating writer.