Do you know what illecebrous, langsuir, and telematology mean? No – I thought not. They are ‘attractive’, ‘female vampire’, and ‘the study of peat bogs’ respectively. Not a lot of people know that. Of course, you might say that not many people would want to know that. But if you are one of the exceptions – people who are fascinated by etymology, unusual words, and obscure terms – Totally Weird and Wonderful Words is the book for you. It’s a collection of really out-of-the-way lexical items and words you have probably never heard of before. Entries run from abligurition (spending a lot on food) and abnormous (18th century, ‘mis-shapen’) to zoonosis (disease transmitted from animals to humans) and Zyrian (a north Russian language). 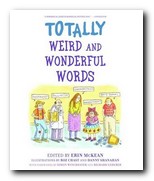 The alphabletised entries are interspersed with mini-essays on various categories of obscure terms, and laced with lots of New Yorker type cartoons. The weirdness of the entries might lie in a word’s obscure meaning, or it might be its unusual orthography – a strange conjunction of letters, as in kalokagathia (nobility and goodness of character).

It doesn’t pretend to be encyclopedic, but I was surprised that one of my own favourite obscure terms wasn’t in there. Borborygmous means ‘rumbling of gas in the stomach’ – and despite its quasi-medical connotations it always brings a smile to my face. But another of my favourites is included. Carphology is ‘the delirious fumbling with bedclothes prior to the onset of death’. Not a word you would need to use every day – but when applied at the right moment, very impressive.

Some which make sense (to a UK audience at least) are terms such as brannigans (the name of a chain of wine bars) which means ‘a drinking bout, a spree, or a binge’. And sometimes the examples are perfectly serious and reasonable – such as steganography, which is ‘the art of secret writing, or cryptography’.

Some are made up, such as igry, which is defined as ‘the way you feel when someone else does something that ought to embarrass them, but doesn’t’. Others are fanciful technical or quasi-scientific inventions.

There’s even a chapter at the end of the book giving you advice on how to create your own weird and wonderful words. However, you should remember that language is entirely democratic. New words will only ever become established if lots of people decide to use them – and that is usually because there’s a need for them. You could struggle for years putting together scientific and Latinate parts of speech – but unless there’s a real need for them, they will die unused. Meanwhile blogging, dogging, and gazumping have caught on because they serve a real purpose – though none are listed here.

Some of the words are clearly deft inventions; others are squeezed out of interpretations of classical terms (it helps if you know Latin and Greek); and others have interesting etymologies, but turn out to be disappointing. It’s interesting to know that there is a word for people who elect to have amputations for the sake of body modification, but somehow disappointing to learn that the word when you get there is only the rather plain nullo.

Some fall into the technical category of what might be called ‘extreme jargon’, as in the following definition of the term contango:

the fee that a buyer of stock pays to the seller to postpone transfer of the stock to the next or any future settlement date. It was also usually paid on a per share or percent basis. The word also has a modern meaning, ‘the condition in which distant delivery prices for futures exceed spot prices, often due to the costs of storing and insuring the commodity’. The antonym of contango is backwardation.

Phew! So now we know.

Many are so obscure it’s difficult to imagine there ever being an occasion when they might be used – either in conversation or in print – such as dromaeognathous, which means ‘having a palate like that of an emu’.

In keeping with its total weirdness, this is a book with three introductions and two forewards. In fact you can open it at any page and be amazed or amused – or both, simultaneously.