a guide to electronic texts

Electronic Text Centre at The University of Virginia

This site is aimed at, and maintained by members of the academic community. It contains some public domain texts and some that are commercially licensed. All texts are accompanied by a TEI header, which contains approximately two pages of information about the text itself, the text used as a copy-text, the identity of the transcriber and any errors and corrections that have been made. In addition, there is an explanation of any conventions that might have been used in transcription.

Some of the texts at this site are illustrated and / or include photographs of the covers of the edition used. For some works, it is possible to choose to download the entire work or receive individual chapters or illustrations.

This site is well run. It follows the TEI guidelines and the texts that it offers are of a high standard. The following screen shot is of its “Modern English Collection”, which contains a wide selection of texts written by women writers, including many British women who published material in the Victorian period. 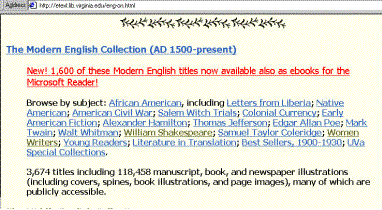 The Oxford Text Archive is a British site, which in itself is unusual as much of the work being done to provide digitised texts it taking place in the USA. Like the Electronic Text centre at Virginia, it is aimed at the academic community and is part of the Arts and Humanities Data Service. It is supported by the University of Oxford, the Joint Systems Community and the Arts and Humanities Research Board all of which adds to the site’s authority and reliability.

The texts on offer here are available in a range of different formats, the majority of which are encoded. They are clearly documented and accompanied by a TEI header. The site includes the usual search facility or there is the option to look up an individual author and see which texts are held. There is also a downloadable and regularly updated catalogue in PDF form. The majority of texts are available for immediate download, although some are only released following a written request to the transcriber.

The site contains many texts written by Victorian women writers, although they are, in practise, restricted to those writers who are traditionally perceived as canonical. George Eliot and Mrs Gaskell are particularly well represented. The following screen shot shows a selection taken from the Oxford Text Archive’s catalogue of E-Texts of works written by Mrs Gaskell. At the time of writing, twenty-four texts by this author are on offer. Seventeen of these are freely available, with the further seven available only after a written request has been submitted. 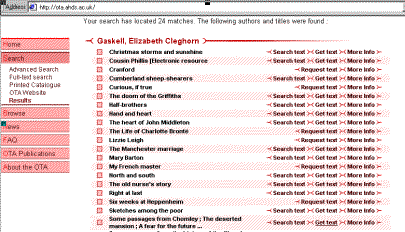 Project Gutenberg was one of the first collections of E-Texts to be established. It is one of the largest archives and is probably the one that is most well known. Originally the brainchild of Michael Hart at the Carnegie Mellon University, it is made up entirely of either out of copyright or copyright cleared texts.

Unlike the two previous sites, it is aimed at the general public with the stated aim of maximum accessibility. The texts chosen are the ones considered to have the widest appeal and they are digitised by volunteers. The only format available is that of ASCII or plain text and typographical errors are not uncommon. The texts are of a varying standard and this is largely down to the skill and acuracy of the individual transcribers. In the majority of cases there is no way of ascertaining which edition has been used as a copy-text and indeed, the site includes a disclaimer to this effect.

Despite these drawbacks however, Project Gutenberg texts are available without charge for research and teaching purposes and the site contains a vast selection of texts written by Victorian Women Writers.

The three sites discussed so far have been examples of archives that hold a variety of texts of different genres and from different periods. This site however, as its name suggests, is a specialized one, compiled and held at the University of Virginia. It contains a wide range of texts and the focus seems to be on the works of lesser known writers. Perry Willett, the general editor, sets out the aims of the project:

The goal of the Victorian Women Writers Project is to produce highly accurate transcriptions of works by British women writers of the 19th century, encoded using the Standard Generalized Markup Language (SGML). The works, selected with the assistance of the Advisory Board, will include anthologies, novels, political pamphlets, religious tracts, children’s books, and volumes of poetry and verse drama. Considerable attention will be given to the accuracy and completeness of the texts, and to accurate bibliographical descriptions of them.

Texts downloaded from the VWWP are accompanied by a TEI header of which the site provides a sample and an explanation.The Texts themselves are of a consistently high standard, are well documented with any corrected errors clearly marked, and the editors provide an explanation of the conventions used during transcription. This site is a extremely useful resource for anyone with an interest in the works of Victorian Women Writers and many of their texts feature in the following bibliography. Further information about the project is available in the following article: