Washington Square (1880) is a short novel originally published as a serial in Cornhill Magazine and Harper’s New Monthly Magazine. It is a structurally simple tragicomedy that recounts the conflict between a dull but sweet daughter and her brilliant, domineering father. She has a handsome young suitor – but the father disapproves of him. There is a battle of wills – all conducted within the confines of their elegant town house. Who wins out in the end? You will be surprised by the outcome. This is a masterpiece of social commentary, with a sensitive picture of a woman’s life. The plot of the novel is based upon a true story told to James by his close friend, the British actress Fanny Kemble. The book is often compared to Jane Austen’s work for the clarity and grace of its prose and its intense focus on family relationships. 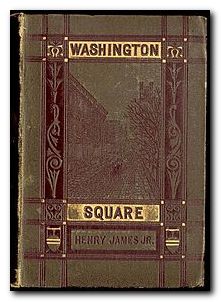 Dr. Austin Sloper is a rich and intelligent widower who lives in Washington Square, New York with his only surviving child, Catherine. She is a sweet-natured woman who is a great disappointment to her father, being physically plain and, he believes, mentally dull. Sloper’s beloved wife, along with a promising young son, died many years before. His busybody sister, the widowed Lavinia Penniman, is the only other member of the doctor’s household.

One day, Catherine meets the charming Morris Townsend at a party and is swept off her feet. Morris courts Catherine, aided by Mrs. Penniman, who loves melodrama. Dr. Sloper strongly disapproves, believing him to be after Catherine’s money. When Catherine and Morris announce their engagement, he checks into Morris’s background and finds him to be penniless and parasitic. The doctor forbids his daughter to marry Townsend, and the loyal Catherine cannot bring herself to choose between her father and her fiancé.

Dr. Sloper understands Catherine’s strait and pities her a little, but also finds an urbane entertainment in the situation. In an effort to resolve the matter, he announces that he will not leave any money to Catherine if she marries Morris. He then takes her on a twelve month grand tour of Europe to distract her attention from Townsend.

During their months abroad, he mentions Catherine’s engagement only twice; once while they are alone together in the Alps, and again on the eve of their return voyage. On both occasions, Catherine holds firm in her desire to marry. After she refuses for a second time to give Morris up, Sloper sarcastically compares her to a sheep fattened up for slaughter. With this, he finally goes too far: Catherine recognises his contempt, withdraws from him, and prepares to bestow all her love and loyalty on Morris.

Upon their return however, when Catherine convinces her fiance that her father will never relent, Townsend breaks off the relationship. Catherine is devastated, then eventually recovers her equanimity, but is never able to forget the injury.

Many years pass. Catherine refuses two respectable offers of marriage and grows into a middle aged spinster. Dr. Sloper finally dies and leaves her a sharply reduced income in his will out of fear that Townsend will reappear. In fact, Morris – now fat, balding, cold-eyed, but still somewhat attractive – does eventually pay a call on Catherine, hoping to effect a reconcilation. But she calmly rebuffs his overtures. The novel concludes with “Catherine … picking up her morsel of fancy-work, had seated herself with it again — for life, as it were.”

An all star cast of Olivia de Havilland as Catherine, Ralph Richardson as Doctor Sloper, and Montgomery Clift as Morris Townsend. Aaron Copland is credited with having composed the theme music, but he denied it.

See reviews of the film at the Internet Movie Database.

An all star cast of Olivia de Havilland as Catherine, Ralph Richardson as Doctor Sloper, and Montgomery Clift as Morris Townsend. Aaron Copland is credited with having composed the theme music, but he denied it.

See reviews of the film at the Internet Movie Database.