Student: James Higginson
Course: An Introduction to the Internet

WAN
A WAN is a network that covers a large geographical area. Each node in a WAN may be located in a different town. A mainframe or minicomputer will usually be involved somewhere in a WAN.

LAN
A LAN is a network that covers a smaller area than a WAN. Typically a LAN will serve the needs of one institution at one site. For example a university will have their own LAN, as may an individual bank. LANs often connect to other LANs and to WANs to allow communication between them. These interconnected LANs and WANs form a network of networks commonly known as the Internet.

Ethernet
Ethernet is a network protocol for LANs. It operates on a bus network topology. It was developed by Bob Metcalfe at Xerox PARC and is the most popular method of LAN protocol. Its popularity is a result of its reliability, speed and relative cheapness.

Networks
The public telephone network is officially known as the Public Switched Telephone Network (PSTN). While switchboard operators were replaced by mechanical, and later by computerized switching equipment, and optical (glass) fibre has replaced much of the copper wiring, the function of the network is still simply to connect the wires of two telephones (or compatible devices such as fax machines or modems), so that sounds coming from one end are transmitted to the other. This is called a ‘circuit-switched’, or more simply ‘switched’, network architecture.

Circuit Switching
While this system is very reliable, it is also extremely inefficient and expensive because the connection is made at the beginning of a conversation, fax transmission, or modem ‘session’, and is maintained until the connection is terminated – meaning a certain portion of the network is reserved exclusively for that conversation whether or not communication is taking place at the moment. If one party puts down the phone or is silent, or neither computer is sending or receiving data for a period of time (as is the case when using the Internet), that circuit as well as the ‘ports’ on the phone switches between the two devices are still unavailable for other activity even though they are not being used at the moment. Since it is estimated that up to 50% of a typical voice conversation is actually silence, clearly a tremendous amount of network capacity is wasted. (Put another way: a company must build double the network it really needs for a given number of simultaneous calls at double the cost.)

Packet Switching
Packet networks break the digital stream of ones and zeros into chunks of the same length. These chunks, or ‘packets’, are then put in the computer equivalent of an envelope, with some information such as the origin and destination, or ‘addresses’, of the packet, and a serial number that indicates the sequence number of the packet – its ‘place in line’. In the place of switches which merely connect and disconnect circuits, packet networks use routers – computers that read the address of a packet and pass it to another router closer to the destination. At the destination, a few thousandths of a second later, the packets are received, reassembled in the correct order, and converted back into the original message. Here is an illustration of how it works: 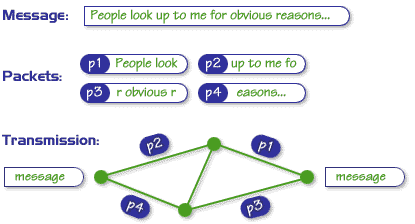 Packet Switching – How it works
The routers in a packet-switched network are permanently connected via high-speed lines. This may seem expensive at first sight, but it makes sense economically (and technically) if the network is heavily used, i.e. effectively flooded with packets.

TCP/IP
The Internet works by breaking long messages into smaller chunks called packets which can then be switched through routers until they reach their destinations. The software associated with the TCP/IP family of protocols takes care of the assembly, disassembly and addressing of packets.

Anatomy of a Packet

Essentially, a packet is a string of bits divided into different segments. At its core is a Data segment (the chunk of the original message) which is sometimes referred to as the payload. In order to arrange for the passage of the payload through the Internet, extra information is added to it in the form of headers or (occasionally) trailers

TCP was eventually split into two protocols – one (IP) to handle addressing of packets, the other (TCP) to deal with their assembly and disassembly. The design philosophy behind this was the belief that it was better to have specialised protocols which each did one job and co-operated with one another rather than trying to design one, all-embracing monolithic protocol which tried to do everything.

DNS
The Domain name system (DNS) is the way that internet domain names are
located and translated into Internet Protocol addressess. A domain name is a
meangingful and easy-to-remember “handle” for an internet address.

POP3
POP3 (Post Office Protocol 3) is the most recent version of a standard protocol for receiving e-mail. POP3 is a client/server protocol in which e-mail is received and held for you by your Internet server. Periodically, you (or your client e-mail receiver) check your mail-box on the server and download any mail. POP3 is built into the Netmanage suite of Internet products and one of the most popular e-mail products, Eudora. It’s also built into the Netscape and Microsoft Internet Explorer browsers.

IMAP
IMAP (Internet Message Access Protocol) is a standard protocol for accessing e-mail from your local server. IMAP (the latest version is IMAP4) is a client/server protocol in which e-mail is received and held for you by your Internet server. You (or your e-mail client) can view just the heading and the sender of the letter and then decide whether to download the mail. You can also create and manipulate folders or mailboxes on the server, delete messages, or search for certain parts or an entire note. IMAP requires continual access to the server during the time that you are working with your mail.

SMTP
SMTP (Simple Mail Transfer Protocol) is a TCP/IP protocol used in sending and receiving e-mail. However, since it’s limited in its ability to queue messages at the receiving end, it’s usually used with one of two other protocols, POP3 or Internet Message Access Protocol, that let the user save messages in a server mailbox and download them periodically from the server. In other words, users typically use a program that uses SMTP for sending e-mail and either POP3 or IMAP for receiving messages that have been received for them
at their local server.

HTTP
The Hypertext Transfer Protocol (HTTP) is the set of rules for exchanging files (text, graphic images, sound, video, and other multimedia files) on the World Wide Web. Relative to the TCP/IP suite of protocol, HTTP is an application protocol. Essential concepts that are part of HTTP include (as its name implies) the idea that files can contain references to other files whose selection will elicit additional transfer requests.

HTML
HTML (Hypertext Markup Language) is the set of “markup” symbols or codes inserted in a file intended for display on a World Wide Web browser. The markup tells the Web browser how to display a Web page’s words and images for the user.

XML
XML (Extensible Markup Language) is a flexible way to create common information formats and share both the format and the data on the World Wide Web, intranets, and elsewhere. For example, computer makers might agree on a standard or common way to describe the information about a computer product (processor speed, memory size, and so forth) and then describe the product information format with XML. Such a standard way of describing data would enable a user to send an intelligent agent (a program) to each computer maker’s Web site, gather data, and then make a valid comparison. XML can be used by any individual or group of individuals or companies that wants to share information in a consistent way.