1. Close reading is the most important skill you need for any form of literary studies. It means paying especially close attention to what is printed on the page. It is a much more subtle and complex process than the term might suggest.

2. Close reading means not only reading and understanding the meanings of the individual printed words; it also involves making yourself sensitive to all the nuances and connotations of a language as it is used by skilled writers.

3. This can mean anything from a work’s particular vocabulary, sentence construction, and imagery, to the themes that are being dealt with, the way in which the story is being told, and the view of the world that it offers. It involves almost everything from the smallest linguistic items to the largest issues of literary understanding and judgement.

4. Close reading can be seen as four separate levels of attention which we can bring to the text. Most normal people read without being aware of them, and employ all four simultaneously. The four levels or types of reading become progressively more complex.

5. Close reading is not a skill which can be developed to a sophisticated extent overnight. It requires a lot of practice in the various linguistic and literary disciplines involved – and it requires that you do a lot of reading. The good news is that most people already possess the skills required. They have acquired them automatically through being able to read – even though they haven’t been conscious of doing so.

This is rather like many other things which we learn unconsciously. After all, you don’t need to know the names of your leg muscles in order to walk down the street. 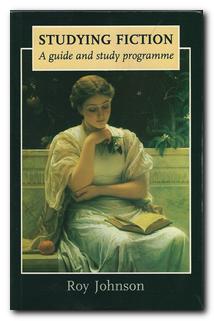 Studying Fiction is an introduction to the basic concepts and technical terms you need when making a study of stories and novels. It shows you how to understand literary analysis by explaining its elements one at a time, then showing them at work in short stories which are reproduced as part of the book. Topics covered include – setting, characters, story, point of view, symbolism, narrators, theme, construction, metaphors, irony, prose style, tone, close reading, and interpretation. The book also contains self-assessment exercises, so you can check your understanding of each topic. It was written by the same author as the guidance notes on this page that you are reading right now.

6. The four types of reading also represent increasingly complex and sophisticated phases in our scrutiny of the text.

7. The first and second of these stages are the sorts of activity designated as ‘Beginners’ level; the third takes us to ‘Intermediate’; and the fourth to ‘Advanced’ and beyond.

8. One of the first things you need to acquire for serious literary study is a knowledge of the vocabulary, the technical language, indeed the jargon in which literature is discussed. You need to acquaint yourself with the technical vocabulary of the discipline and then go on to study how its parts work.

9. What follows is a short list of features you might keep in mind whilst reading. They should give you ideas of what to look for. It is just a prompt to help you get under way.

10. Now here’s an example of close reading in action. The short passage which follows comes from the famous opening to Charles Dickens‘ Bleak House.

11. If you would like to treat this as an interactive exercise, read the passage through a number of times. Make notes, and write down all you can say about what goes to make up its literary ‘quality’. That is, you should scrutinise the passage as closely as possible, name its parts, and say what devices the author is using. Don’t be afraid to list even the most obvious points.

12. If you are not really sure what all this means however, allow yourself a brief glance ahead at the first couple of discussion notes which follow, and then come back to carry on making notes of your own.

13. Don’t worry if you are not sure what name to give to any feature you notice. You will see the technical vocabulary being used in the discussion notes which follow, and this should help you pick up this skill as we go along.

London. Michaelmas Term lately over, and the Lord Chancellor sitting in Lincoln’s Inn Hall. Implacable November weather. As much mud in the streets, as if the waters had but newly retired from the face of the earth, and it would not be wonderful to meet a Megalosaurus, forty feet long or so, waddling like an elephantine lizard up Holborn Hill. Smoke lowering down from chimney pots, making a soft black drizzle, with flakes of soot in it as big as full grown snowflakes – gone into mourning, one might imagine, for the death of the sun.

14. This is the sort of writing which many people, asked for their first impressions, would say was very ‘descriptive’. But if you looked at it closely enough you will have seen that it is imaginative rather than descriptive. It doesn’t ‘describe what is there’ – but it invents images and impressions. There is as much “it was as if …” material in the extract as there is anything descriptive. What follows is a close reading of the extract, with comments listed in the order that they appear in the extract.

London
This is an abrupt and astonishingly short ‘sentence’ with which to start a six hundred page novel. In fact technically, it is grammatically incomplete, because it does not have a verb or an object. It somehow implies the meaning ‘The scene is London.’

Sentence construction
In fact each of the first four sentences here are ‘incomplete’ in this sense. Dickens is taking liberties with conventional grammar – and obviously he is writing for a literate and fairly sophisticated readership.

Sentence length
These four sentences vary from one word to forty-three words in length. This helps to create entertaining variation and robust flexibility in his prose style.

Michaelmas Term
There are several names (proper nouns) in these sentences, all signalled by capital letters (London, Michaelmas Term, Lord Chancellor, Lincoln’s Inn Hall, November, Holborn Hill). This helps to create the very credible and realistic world Dickens presents in his fiction. We believe that this is the same London which we could visit today. The names also emphasise the very specific and concrete nature of the world he creates.

Michaelmas Term
This occurs in autumn. It comes from the language of the old universities (Oxford and Cambridge) which is shared by the legal profession and the Church.

Lord Chancellor sitting
Here ‘sitting’ is a present participle. The novel is being told in the present tense at this point, which is rather unusual. The effect is to give vividness and immediacy to the story. We are being persuaded that these events are taking place now.

Implacable
This is an unusual and very strong term to describe the weather. It means ‘that which cannot be appeased’. What it reflects is Dickens’s genius for making almost everything in his writing original, striking, and dramatic.

as if
This is the start of his extended simile comparing the muddy streets with the primeval world.

the waters
There is a slight Biblical echo here, which also fits neatly with the idea of an ancient world he is summoning up.

but newly and wonderful
These are slightly archaic expressions. We might normally expect ‘recently’ and ‘astonishing’ but Dickens is selecting his vocabulary to suit the subject – the prehistoric world. ‘Wonderful’ is being used in its original sense of – ‘something we wonder at’.

forty feet long or so
After the very specific ‘forty feet long’, the addition of ‘or so’ introduces a slightly conversational tone and a casual, almost comic effect.

waddling
This reinforces the humorous manner in which Dickens is presenting this Megalosaurus – and note the breadth of his vocabulary in naming the beast with such scientific precision.

like an elephantine lizard
This is another simile, announced by the word ‘like’. Here is Dickens’s skill with language yet again. He converts a ‘large’ noun (‘elephant’) into an adjective (‘elephantine’) and couples it to something which is usually small (‘lizard’) to describe, very appropriately it seems, his Megalosaurus.

up Holborn Hill
There is a distinct contrast, almost a shock here, in this abrupt transition from an imagined prehistoric world and its monsters to the ‘real’ world of Holborn in London.

lowering
This is another present participle, and an unusual verb. It means ‘to sink, descend, or slope downwards’. It comes from a rather ‘poetic’ verbal register, and it has a softness (there are no sharp or harsh sounds in it) which makes it very suitable for describing the movement of smoke.

soft black drizzle
He is comparing the dense smoke (from coal fires) with another form of particularly depressing atmosphere – a drizzle of rain. Notice how he goes on to elaborate the comparison.

as big as full grown snow flakes
The comparison becomes another simile: ‘as big as’. And then ‘full grown’ almost suggests that the snowflakes are human. This is a device much favoured by Dickens: it is called ‘anthropomorphism’ – attributing human qualities or characteristics to things which are themselves inanimate. Then ‘snowflakes’ is a well-observed comparison for an enlarged flake of soot, because they are of similar size and texture. Notice next how Dickens immediately goes on to play with the notion that whilst soot is black, snowflakes are white.

gone into mourning
This reinforces the anthropomorphism. The inanimate world is being brought to life. And of course ‘mourning’ reinforces the atmospheric gloom he is trying to evoke. It also introduces blackness (the colour of mourning) to explain how these snowflakes (actually flakes of soot) might have changed from white to black.

the death of the sun
This is why the flakes have changed colour. And if the sun has died the light and life it brings to earth have also been extinguished – which reinforces the atmosphere of pre-historic darkness he is creating.

15. We will stop at this point. It would in fact be possible to say even more about the extract if we were to relate it to the novel as a whole – but almost everything listed was accessible even if you were reading the passage for the first time.

16. Literary studies are not conducted in such detail all the time, but it is very important that you try to develop the skill of reading as closely as possible. It really is the foundation on which everything else is based.

17. The next point to make about such close reading is that it becomes easier if you get used to the idea of reading and re-reading. The Russian novelist Vladimir Nabokov (famous for Lolita) once observed that “Curiously enough, one cannot read a book: one can only re-read it”.

18. What he meant by this apparently contradictory remark is that the first time we read a book we are busy absorbing information, and we cannot appreciate all the subtle connexions there may be between its parts – because we don’t yet have the complete picture before us. Only when we read it for a second time (or even better, a third or fourth) are we in a position to assemble and compare the nuances of meaning and the significance of its details in relation to each other.

19. This is why the activity is called ‘close reading’. You should try to get used to the notion of reading and re-reading very carefully, scrupulously, and in great detail.

20. Finally, let’s try to dispel a common misconception. Many people ask, when they first come into contact with close reading: “Doesn’t analysing a piece of work in such detail spoil your enjoyment of it?” The answer to this question is “No – on the contrary – it should enhance it.” The simple fact is that we get more out of a piece of writing if we can appreciate all the subtleties and the intricacies which exist within it. Nabokov also suggested that “In reading, one should notice and fondle the details”.