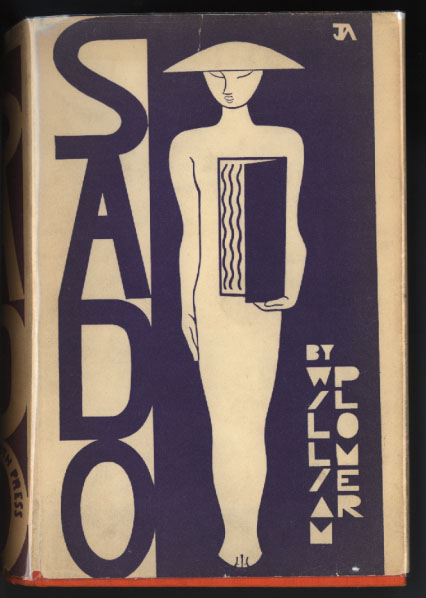 “The first version of Sado ran to some 170,000 words, as Plomer wrote to Woolf in February, but he soon boiled it down to half that length. He sent the revised typescript to the Woolfs two months later just as they returned to London after driving through western France for two weeks on their annual outing. Refreshed from their trip, the Woolfs read Plomer’s novel immediately, Leonard writing to him five days later on Friday that both he and Virginia liked the book very much. They were struck by Plomer’s writing and his psychological insights, finding the theme [of homo-eroticism] “extraordinarily interesting” and his prose less uneven than his previous writing, with “fewer, if any, air pockets”. With the publication of Sado, Plomer reached maturity as a writer. Leonard had over 1,500 copies of the novel printed and issued with a handsomely stylized dust jacket in white and blue designed by John Armstrong. In spite of its promising send-off, Sado disappointed by selling only 837 copies in the first six months and by going in the red over £64 in the first year.”