Youth was written in early 1898 and first published in Blackwood’s Magazine for September 1898. It was later collected in book form as Youth, A Narrative and Two Other Stories published by William Blackwood in 1902. The two other stories were Heart of Darkness and The End of the Tether. The first American edition was published by McClure, Phillips in 1903.

This is one of a number of stories which features as background the transition from sailing ships to coal fired steam ships. The age of sail is often depicted in Conrad’s work as elegant, stylish, and requiring a ship’s crew with practical skills and a disciplined sense of co-operation. Steam-powered ships on the other hand are often depicted as dangerous and mechanically crude vessels, with no particular glamour attached to them.

It is clear in this story and others that Conrad regards the old sailing ships as a more romantically pure form of sea travel – but that experienced mariners must be able to translate their skills to the newer world of steam-powered vessels. In Youth Marlow survives storms and then the collapse and finally the destruction of the Judea. But he survives these maritime experiences and sees them as a right of passage into adult life.

The first point to note is that Conrad created his narrative using a construction which he used several times – as did his friend Henry James. A group of men are gathered round a table in conversation. An outer-narrator sets the scene and introduces the characters – including in this case the inner-narrator Charles Marlow, who takes over the story.

This is sometimes called a ‘framed narrative’ – but it is worth noting that the narrative baton is never handed back to the original outer-narrator. Marlow keeps the story to himself until the end of the tale – merely referring to the others around the table in his final paragraph.

As readers we tend to forget that the entire story is essentially a first-person narrative, and that Marlow may be prejudiced or even wrong about some of his suppositions within the text. This was a literary device with rich potential that Conrad developed in some of his later fiction – and it has to be said that he did not always keep the narrative logic under firm control. Some of his novels feature scenes which the narrator (Marlow and others) could not know about.

The main weakness with the story is that it is not much more than a rather repetitive catalogue of disasters befalling the unfortunate ship, and not much psychological drama between any of the characters and the events which harass them.

The repetition of the storms and re-fits to the Judea spoil any structural unity the story might have had, and they smack very much of being inspired by keeping a documentary record of personal experience, rather than the construction of a work of art. Indeed, in his preface to the collection of tales in which Youth appeared Conrad says of the piece himself “Youth is certainly a piece of autobiography (`emotions remembered [sic] in tranquillity’)”.

Marlow’s concluding encomium on youthful aspirations is measured and ambiguous enough to include a certain amount of self-criticism. He is looking back from the age of forty-two when recounting the story amongst his conversational colleagues, and the implication of the concluding line surely includes a note of scepticism:

“…tell me, wasn’t that the best time, that time when we were young at sea, young and had nothing, on the sea that gives nothing, except hard knocks – and sometimes a chance to feel your strength – that only – what you all regret?”
And we all nodded at him: the man of finance, the man of accounts, the man of law, we all nodded at him over the polished table that like a still sheet of brown water reflected our faces, lined wrinkled, our faces marked by toil, by deceptions, by success, by love; our weary eyes looking still, looking always, looking anxiously for something out of life, that while it is expected is already gone – has passed unseen, in a sigh, in a flash – together with the youth, with the strength, with the romance of illusions.

The inner-narrator Marlow recounts his first voyage in the East as second mate at the age of twenty on the Judea. He has transferred from an Australian clipper to a rusty old ship taking coal from the Tyne to Bangkok. The ship encounters gales in the North Sea and delays in Newcastle when there is a collision with a steamer. They sail into the North Sea where the ship begins to break up in further storms. But Marlow feels invigorated by surviving the ordeal and thinks of it as an ‘adventure’.

The galley and seamen’s quarters are swept away in the storm, and the steward is found completely mad with fear, from which he never recovers. When the storm abates they turn back to Falmouth, where the ship is repaired. When they set off again the crew refuse to continue. Even with a new crew, the same thing happens again. They become ‘residents of Falmouth’. The ship is then completely re-fitted, at which point all the rats on board leave the ship. A new crew is recruited from Liverpool, and the ship sails for Bangkok.

All goes well until they reach the Indian Ocean, when the cargo of coal catches fire. The crew try to put out the fire by pumping water into the hold. Their efforts last for two weeks, at which point they finally celebrate their success. Shortly afterwards the coal gas causes an explosion which rips the ship apart. The captain ignores the damage and keeps going for Bangkok.

They seek assistance from a passing ship which tows them towards a nearby port. But en route the fire breaks out again. The captain opts to stay with the ship until its extinction, saving as much as possible for the underwriters. With the ship on fire and the lifeboats ready to depart, Marlow goes back on board to find the captain asleep and other members of the crew having a meal and drinking beer. When his lifeboat finally cuts loose from the ship, Marlow thinks of this as his first real command.

Marlow eventually reaches a small port on a nearby island, and is shortly afterwards joined by the captain. An English steamer agrees to take them as passengers to safety. Marlow awakes the next day face to face with the East of his dreams and ends the soliloquy with a rhapsodic tribute to youthful optimism. 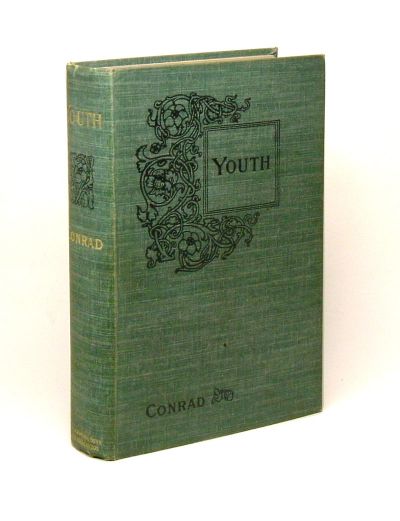