Edith Wharton is a writer whose life and work spans the nineteenth and twentieth centuries – rather like Joseph Conrad, Henry James, and even Thomas Hardy. Most of her published output was produced after 1900, yet she represents the mores and values of ‘old money’ upper class America confronted by the economic and social challenges of the New Century. Not that she had to endure any of its hardships and uncertainties. She was born into a very rich family and when the dollar lost value after the end of the Civil War she spent much of her childhood living in France and Italy .She learned foreign languages, inherited a keen visual memory and an appreciation of sense of place from her father, whose private library of classics provided the materials of her education. 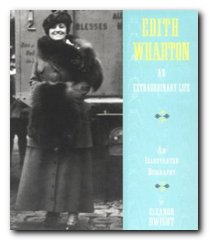 Most of her younger life was spent oscillating between lavish homes in New York and fashionable retreats on the Eastern seaboard in summer months. She was a precocious youngster, and had poetry and stories published whilst still in her teens. As a popular Young Thing of her very privileged set, she was quickly successful in acquiring a rich and handsome husband. However, Teddy Wharton was an outdoor pursuits type who did not share her intellectual aspirations. They set up home in New York, but when she came into a very generous inheritance she immediately bought a huge ‘summer house’ at Land’s End, Newport. She commissioned architect Ogden Codman to refurbish the house, then co-wrote with him what became the first of her many best-sellers – The Decoration of Houses.

She lived a rather independent life and had friendships with a number of men and women. However, when she met the London Times journalist W. Morton Fullerton in Paris, she felt for the first time in her life she had located a soul mate. They became lovers, even though he was bisexual and had a rather disreputable past. The affair lasted three years, after which she divorced her husband and began to travel regularly in Europe with her friend Henry James, who was an admirer of her writing. She published her first major novel The House of Mirth in 1905, and thereafter produced a healthy output of travel writing, novels, and short stories.

She established an American expatriate salon in Paris and mixed with a cosmopolitan selection of artists and intellectuals, including Jean Cocteau, Serge Diaghilev, Andre Gide, and Walter Sickert. When the first world War broke out she quickly threw herself into providing employment for working-class French women whose husbands had been conscripted. She toured the front lines of battle in her chauffeur driven limousine and wrote accounts supporting the French war effort – for which she was awarded the Legion of Honour in 1916.

After the war she established two houses and their gardens – one on the outskirts of Paris, and the other at Hyéres, in southern Provence. These properties were used as bases from which she continued to tour Europe and the Mediterranean. She became an expert on garden design (rather like Vita Sackville-West) although she never did any of the actual gardening herself. She continued to publish novels, novellas, and her memoirs right up to her death in 1937.

Eleanor Dwight’s account of Wharton’s life isn’t a biography in the conventional sense of tracing her movements in chronological order. Instead, it takes main issues and places – New York, Italy, the motor car, and the war – as a framework on which to build the larger picture. Indeed, Wharton’s affair with Fullerton is mentioned in three brief lines between several pages of rapture about her garden designs.

Dwight also takes the common liberty of paraphrasing and interpreting Wharton’s fiction as a guide to understanding the conflicts in her life – a very dubious practice which also omits to point out how funny her writing can be. But on balance it makes for a very readable narrative, and as a lavishly illustrated study, the period photographs add both charm and depth to her study.