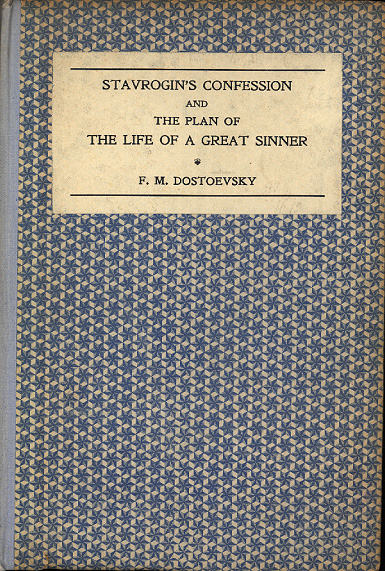 This unpublished material from The Possessed was translated by S.S.Koteliansky with Virginia Woolf. The financial success of these Russian translations enabled the press to transform itself from a handpress cottage industry into an established commercial publisher. The origins of the text were explained in their ‘Translator’s note’:

“The Russian government has recently published a small paper-covered book containing Stavrogin’s Confession, unpublished chapters of Dostoyevski’s novel The Possessed, and Dostoyevski’s plan or sketch of a novel which he never actually wrote but which he called The Life of a Great Sinner.”

Leonard Woolf provides an account of the book as a physical object with his customary attention to fine detail:

“These books, which I still think to be beautifully printed and bound, were very carefully designed by Virginia and me, and they were unlike the books published by other publishers in those days. They were bound in paper over boards and we took an immense amount of trouble to find gay, striking, and beautiful papers. The Dostoyevski and Bunin were bound in very gay patterned paper which we got from Czechoslovakia … We printed, I think, 1,000 of each and [sold] the Dostoyevski at 6s. [They] sold between 500 and 700 copies in twelve months and made us a small profit, and they went on selling until we reprinted or they went out of print.”