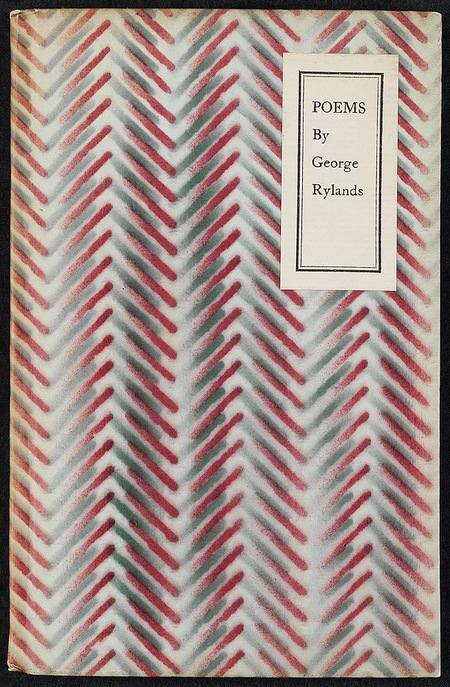 “George (“Dadie”) Rylands as an undergraduate moved in the Cambridge Apostles circuit of young men who caught the attention of Maynard Keynes and Lytton Strachey. He became the Woolfs’ short-term but beloved assistant from July to December 1924 and then returned to Cambridge where he became a fellow of King’s College in 1927. The Woolfs published two volumes of Rylands’s poetry, Russet and Taffeta (1925), people by Perditas and Corydons, and Poems (1931) about Chloe and Flora amid the flowers and hay-scented farmlands. The Woolfs also published his fellowship dissertation, Words and Poetry (1928). For all their skillful lyricism, Rylands’s Poems are like pressed flowers, nosegays colourless and dry, preserved from change. Only one year older than William Plomer and two years older than Christopher Isherwood, Rylands wrote not of his generation but of a generation before the FirstWorld War.”

There is generous use of white space in this, the second book of Rylands’ poetry hand printed by the Woolfs… There is a typo in the imprint, placing a comma rather than a period after Leonard’s initial.