Georgina’s Reasons first appeared in serial form in the New York newspaper The Sun for July—August 1884. This was a serious newspaper which ranked alongside the more famous broadsheets The New York Times and the New York Herald Tribune. The story was then reprinted in book form amongst Stories Revived published in England and America in 1885. 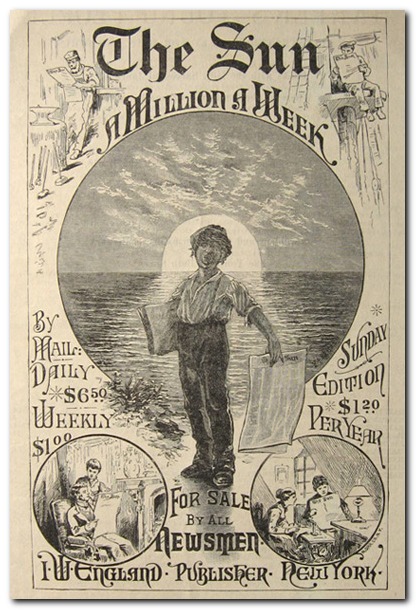 There only seem to be three points to be made about this tale. The first is obvious and explicit; the second less so; and the third only emerges in the light of reading James’s other stories with a similar theme.

The first is that whatever Georgina’s reasons are, she keeps them to herself. Obviously she is wilful and defiant towards her parents. She disobeys them and thwarts their ambitions. But she gains nothing from marrying Raymond in secret then going back to live at home. She has not gained any independence.

Obviously she deceives Raymond, mistreats him, and behaves even more outrageously towards her own child. Then – although we are not shown how she does it – she claws her way into higher society via a bigamous marriage to Mr Roy.

In other words she is a completely unscrupulous status seeker with no moral framework other than rampant self-interest and a total disregard for the feelings of others. She is like the precursor of an ambitious bitch from some television soap opera.

In contrast (the second point) Raymond Benyon appears to be the model of high-principled moral integrity. He agrees to keep their marriage secret, despite having no earthly motive for doing so. And he sticks to this absurd agreement even when attractive alternatives are on offer.

But is he so honourable? He realises that because he is technically married, he ought not to become entangled with unmarried women, but he does so nevertheless. So far, so understandable. But then he cannot bring himself to explain to Kate Theory why he is so reluctant to develop their relationship – and at the end of the tale he makes quite a cruel suggestion that they ‘wait’ before marrying – at the same time as applying for another commission at sea.

His excuse to himself is that the ‘wait’ is only until the death of his wife, to whom he is still legally married. But she is only thirty years old at the time. He is prevaricating wimpishly at the expense of Kate’s feelings for him.

If these two observations are put together, they form the basis for the third point of argument – that this story is yet another of the many James wrote which offer a cautionary tale against emotional entanglements with women, and the perilous consequences of being married. Read alongside other tales such as Benvolio, , and The Path of Duty there is every reason to believe that James was giving expression (whether consciously or unconsciously) to the dilemma he faced in his own relations with women, marriage, and sexuality. He would not resolve this dilemma until quite late in his own life.

Part I.   Georgina Gressie causes distress to her successful family when she announces that she wishes to marry Raymond Benyon, a humble lieutenant in the navy. She acts in a contradictory manner with Raymond, and argues that they should see less of each other, but marry as quickly as possible. She argues for marrying in secret and continuing to live with her parents.

Part II.   Georgina announces to Mrs Portico that she has been married for a year, and wishes to go to Europe. She has pretended to her family that her relationship with Raymond Benyon is over. He is away at sea, and she is pregnant. She has sworn Raymond to permanent secrecy regarding their marriage. Mrs Portico suggests that she should tell her parents, but Georgina refuses indignantly.

Part III.   However, Mrs Portico consents to the trip and they go to Genoa, where Georgina gives birth to a son, who she immediately gives away to an Italian surrogate mother. Mrs Portico feels guilty about conspiring in this sort of conduct, and thinks of adopting the child herself. She is increasingly critical of Georgina, and secretly writes to Raymond to tell him about his son, offering to bring him up herself. However, shortly afterwards she dies of malarial fever. Georgina returns to New York.

Part IV.   Ten years later Kate Theory is looking after her consumptive sister Mildred in Naples. They have been visited by Captain Benyon, who Kate thinks has a ‘lost love’ in his past. His commodore has left him in charge of the Louisiana whilst away. They have met via the US consul, and Raymond is attracted to them, despite his self-imposed rule of staying away from unmarried women.

Mildred reveals privately to Raymond their fear that they will not like their brother’s wife Agnes, who is due to visit. Raymond also worries that Mildred seems to be pushing her sister Kate at him, because he is falling for her despite himself. He leaves abruptly, and when Kate returns she is devastated.

Part V.   Ten days later Raymond has admitted to himself that he is in love with Kate, but feels he must renounce their relationship because technically he is still married. Agnes Theory has turned out to be an empty-headed bore. Raymond half declares himself to Kate, and then is shown a portrait of Georgina, who has married a rich New York businessman. He thinks back in great anger about the manner in which Georgina has deceived him, particularly with regard to their child, for whom he has searched, fruitlessly. He now feels that Georgina has put herself within his power.

Part VI.   Back in New York, Raymond visits Georgina and finds her beautiful and completely unrepentant. He wants a divorce, but she refuses. Instead she introduces him to her husband Mr Roy. Raymond could reveal her bigamous status, but doesn’t. She sends him off with the suggestion that he should marry again without getting a divorce. He feels constrained by the promise he originally made to her, and cannot find a way out of this dilemma. Finally, he decides to renounce Kate. He tells her they must wait to get married and asks the navy for a new commission.