Harold Nicolson was a writer, a politician, and a diplomat – but he is best known as the husband of Vita Sackville-West, and thus by proxy a figure on the fringes of the Bloomsbury Group. He was quite a complex character, and one of the few examples I have come across of someone from the upper reaches of society whose political opinions moved from right to left during the course of life, rather than the other way round. Harold Nicolson’s Diaries is a record of his multi-faceted life. 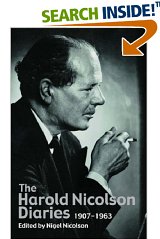 This book is a compilation of both his diaries and letters – principally to his wife, from whom he spent most of their married life apart, something that might well have contributed to the longevity of their curious union (outlined in their son’s fascinating Portrait of a Marriage). It covers an immensely long period in historical terms – starting before the first world war and continuing through a restless life of politics, literature, travel, and high society hob-nobbing until the advent of the Beatles.

He was the only member of the peace conference that followed the second world war who had also been present at the first. For the majority of these pages (which represent only a small part of his complete diaries) he was either a diplomat or an MP. Surprisingly, for a snob and elitist, he was very critical of the punitive reparations extracted by the allies in 1918 (which also caused John Maynard Keynes to resign from the commission). Nicolson also petitioned the prime minister for the return of the Elgin Marbles to Athens, and he was passionately opposed to war, having fully absorbed the lessons of 1914-1918.

Lots of famous figures whiz through the pages in cameo performances: Winston Churchill, Lawrence of Arabia, Noel Coward, three generations of UK royalty, Konrad Adenauer, James Joyce (“a difficult man to talk to”) – and it is quite obvious that Nicolson isn’t name-dropping. These were simply the circles in which he mixed.

This work throws his collection of character sketches Some People into sharp positive relief, because for all the famous people and the important scenarios he finds himself involved with here, there is none of the artistic flair and the dramatic compression of his fictionalised narratives.

He resigned from the diplomatic service at the end of 1929 and went to work for Lord Beaverbrook on the Evening Standard, which he hated. He considered journalism “a mere expense of spirit in a waste of shame. A constant hurried triviality which is bad for the mind.”

Then he was torn between writing and politics, whilst he and his wife waited impatiently for his mother-in-law to die, so that they could inherit and be spared any worries about money (having in the meanwhile bought a castle). Actually, she spited them both, and left her money to their son.

He eventually got a seat as MP for Leicester (which Vita refused to visit) and settled into a busy life as an active parliamentarian. The inter-war years coverage is full of the rise of fascism, Italy’s attack on Abyssinia (Ethiopia), the abdication crisis, and then the full drama of the second world war, which provide his most inspired entries.

Although on the surface his political allegiances moved leftwards, he was a great admirer of Churchill, and he eventually regretted joining the Labour Party. He never achieved high office, and when eventually awarded a knighthood, he was so snobbish he felt it as an insult, because he thought he ought to be made a member of the Lords – so that he could escape his ‘plebeian’ surname.

Modern readers will have to choke back opinions which seem to come out of the political ark:

I believe that our lower classes are for some curious reason congenitally indolent, and that only the pressure of gain or destitution makes them work.

But the effort of restraint necessary is eventually worth it – because of the insights he affords into the workings of the English upper class, the oblique glimpses we get into power politics, the guided tours through London clubland, and his revelations about people as diverse as the Duke of Windsor (‘eyes…like fried eggs’) and Henry James (‘a late-flowering bugger’).