In Dreams Begin Responsibilities (1938) is a collection of short stories which propelled Delmore Schwartz into literary prominence at the age of only twenty-five. He was a young Jewish writer from Brooklyn, New York who went on to become a prominent figure in the literary and intellectual life of the city.

Most people will know about him from the fictionalised portrait that forms the basis of Saul Bellow’s novel Humboldt’s Gift (1975). This invention charts the rise and fall of their friendship, and the tragedy of Schwartz’ descent into madness, alcoholism, and an early death in 1966. 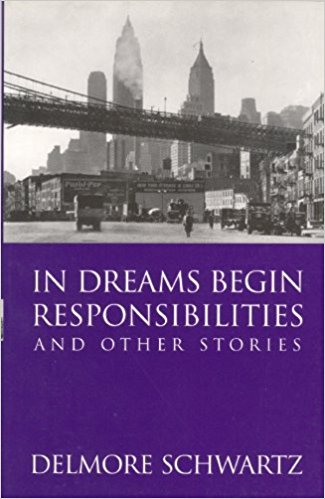 The title story In Dreams Begin Responsibilities appeared in the very first issue of the influential magazine Partisan Review. It is based on the disastrous marriage of his parents who divorced when Schwartz was only nine.

In the story a young man recounts the courtship of his mother and father – as if he were watching the event projected as a silent film in a movie theatre. His eager father takes his mother to Coney Island for the day in order to make a marriage proposal. At first the event goes well and they are both very happy; but then his father becomes irritated and impatient – at which point the boy in the cinema bursts out with a passionate note of warning:

“Don’t do it. It’s not too late to change your minds, both of you. Nothing good will come of it, only remorse, hatred, scandal, and two children whose characters are monstrous.”

it transpires that the story is being presented by the son at an older age. The narrative gains much of its force from what has passed in between the childhood ‘memory’ and the narrative present, which is not directly related. The story suggests that what started out as a positive relationship eventually resulted in a failed marriage that has left one of its offspring traumatised.

This petulant outburst achieves its dramatic effect because the story is being related simultaneously on three separate time planes:

There are also two further levels of meaning in the story – both of which suggest the influence of Franz Kafka, whom Schwartz had read. The first is that the narrator, having made his premonitory warning against the marriage of his parents, is reproached by the usher who shows him out of the ‘cinema’. The usher’s admonition completely undercuts the assurance of the boy’s outrage:

“What are you doing? Don’t you know that you can’t do whatever you want to do? Why should a young man like you, with your whole life before you, get hysterical like this? Why can’t you think of what you’re doing?”

The second level of meaning which also strongly echoes Kafka, is that no matter that the boy’s retrospective warning against his parents’ marriage (which he perceives as a disaster), it is also an example of a child’s primordial fear of its parents’ sexuality. Kafka’s stories and literary fragments are packed with similar scenes.

Schwartz’ precocious skill was to compress all these levels of chronology and meaning into one quite short story. He wrote it in one weekend when he was only twenty-one

America! America! is a sketch of immigrant family life = their hopes, aspirations, and failures. The Baumanns carry the culture of the Old Country with them, but they have high expectations of the new Utopia. Unfortunately, in the years of the 1930s depression, it cannot live up to them:

The expectations of these human beings who had come in their youth to the new world had not been fulfilled in the least. They had above all expected to be rich, and they had come with a very different image of what their new life was to be.

The character through whose eyes the events unfold is Shenandoah Fish. He sees the weaknesses and failures of the American Dream, but realises that he is part of the collective experience:

His separation was actual enough, but there existed also an unbreakable unity. As the air was full of the radio’s unseen voices, so the life he breathed in was full of these lives and the age in which they had acted and suffered.

The collection also contains one or two stories offering satirical views of life amongst young New York intellectuals. These are coded sketches of the fashionable people with whom Schwartz was mixing in the late 1930s and 1940s. However, without editorial explanations they are unlikely to be identified by most readers today.

In The World is a Wedding Schwartz captures the language and attitudes of a whole group – second generation Jewish immigrants who have been educated in the Brave New World to which their families brought them for a better life. They have the comforts that their parents have worked hard for, but they do not want to work in the shop or continue the family traditions.

They have even had time to develop pretensions. A young bohemian parades his know-it-all attitudes to a middle-aged first generation woman. The woman’s son then remarks “You have just seen a genius” – to which his mother replies “How much money does he make?” The answer to this (which is not given) is nothing – because he doesn’t have a job.

Delmore Schwartz never fulfilled his early promise, and his final years were truly tragic, but this collection of early and mid-period stories illustrate why so many people rated him so highly. He seems to have paved the way for the next generation of Jewish writers such as Saul Bellow and Philip Roth. And the collection is worth it for the title story alone.