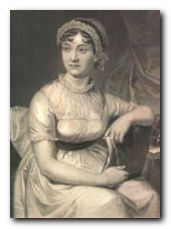 1775. Jane Austen born in Steventon rectory, Hampshire, the daughter of a local rector. She was the youngest of seven children. Two brothers go on to serve at sea. Two others enter the church.

1780+. Her father was a competent scholar who encourages her education in English literature, French, and Italian.

1790. Early writing and experiments with what she described as ‘nonsense, burlesque and satire’.

1795. Lady Susan – a short novel written in epistolary form. Elinor and Marianne exists as first draft of what was to become Sense and Sensibility.

1796. Begins to write First Impressions, which was completed as Pride and Prejudice the following year. Reads Fanny Burney (1752-1840) the creator of ‘the novel of home life’.

1798. Northanger Abbey a deliberate satire of the type of Gothic Romance (The Mysteries of Udolpho, The Monk) then in vogue. It was sold – but not published. This and all her subsequent work was published anonymously.

1801. Father retires to live with family in Bath.

1805. Death of father. The Watsons written about this time.

1807. Family settles to live in Southampton.

1809. Family moves to Chawton, Hampshire (owned by Jane Austen’s brother). She writes all her novels in a corner of one sitting-room surrounded by the entire family.

The Complete Critical Guide to Jane Austen is a good introduction to Austen criticism and commentary. It includes a potted biography, an outline of the novels, and pointers towards the main critical writings – from Walter Scott to critics of the present day. It also includes a thorough bibliography which covers biography, criticism in books and articles, plus pointers towards specialist journals. It also has an interesting chapter discussing Austen on the screen. These guides are very popular.