Professor Fargo first appeared in The Galaxy magazine for August 1874. Its next appearance in book form was in the collection of stories Travelling Companions published in New York by Boni and Liveright in 1919. 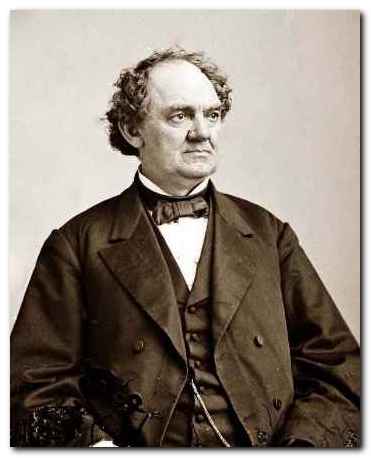 The story seems to combine elements of comic burlesque with a savage criticism of the shabby fraudulence in the ‘spiritual’ showman – something which would surface again in the character of Selah Tarrant in The Bostonians (1886). Its subject appears to be aimed at the market for popular fiction for which James was writing around this time, but there are two issues worthy of note in artistic terms.

The first of these is that all three male characters in the story do the same thing: they attempt to persuade their audiences with the power of rhetoric. The narrator is a travelling salesman whose livelihood rests on persuading other people to purchase the goods he sells – which remain unspecified. The Colonel claims to have ‘inventions’ and mathematical formulae which he thinks will be of great benefit to society. Perhaps because he doesn’t follow the conventional method of writing down his ideas, he is forced to describe them orally. But nobody in the audiences can understand what he is talking about, and his ‘inventions’ have all failed – which has led him to be dependent upon the Professor.

The Professor himself is an out-and-out fraud. He claims he can communicate with people who are dead, and that he has special powers of ‘spiritual’ and personal ‘magnetism’ which he singularly fails to demonstrate during his performances. However, the second detail worthy of note is that the Professor does eventually wield some sort of personal persuasiveness on Miss Gifford – who abandons her own father and takes up with the florid mountebank Fargo.

This sudden reversal of allegiance is not unlike that demonstrated by the young girl in James’s story Adina written earlier in the same year. Adina is engaged to marry a somewhat unattractive classical scholar, but she suddenly elopes with a handsome young Italian man to whom she has hardly even spoken. The common element of lack of speech is perhaps telling. James obviously believed that some people were susceptible to being attracted by sheer animal magnetism, even if they did leave behind them a distinct trace of ‘Frailty, thy name is woman’.

Part I. An un-named narrator decides to wait for three days in a sleepy little American town for a business contact to return. In the town hall he encounters Professor Fargo, who is preparing the evening’s demonstration of spiritualism and mental magnetism. They exchange opinions regarding spiritualism – the narrator being firmly sceptical. Later the same day he sees the Professor again, engaged with a pretty deaf-mute girl in the public cemetery.

Part II. The narrator attends the evening show. The Professor’s performance is poor and without any results. Then his partner Colonel Gifford presents a new mathematical method, which nobody in the audience understands. Then his daughter the deaf-mute girl presents miracles of multiplication on a blackboard.

Next day the narrator meets all three performers at breakfast at the inn where they are all staying. He compliments the Colonel on his mathematical theories. The sombre Colonel reveals that he does not subscribe to the Professor’s quack claims. He himself has practical inventions which he hopes will benefit society; he has lost his wife; and he resents being dependent on the Professor, who he thinks a vulgar fraud. Because all the Colonel’s experiments have so far failed, the Professor has persuaded him to feature his gifted daughter in their act.

Later the same day, the Colonel unburdens himself further to the narrator. The Professor drinks heavily and treats visitors at the inn to his philosophy of ‘spiritual magnetism’. The Colonel then denounces these claims publicly, following which the Professor proposes to prove his powers with a practical demonstration.

Part III. Six weeks later the narrator sees another of their performances in New York. Their fortunes have sunk even lower than before. The Colonel has let the Professor off his challenge (because it was made whilst drunk). Whilst out walking with the narrator, the Colonel has a sudden inspiration for a major new idea. But when they arrive at the Colonel’s lodging they find the Professor is there: he offers the narrator a free ticket for the evening’s performance.

However, there is no audience at all, and when the manager demands rent for the hall, the Professor is unable to pay. The narrator offers to pay the Colonel’s half of the bill. The Professor proposes to form a new act featuring the girl – but the Colonel indignantly refuses. However, when faced by a choice of loyalties, the girl goes off with the Professor. The Colonel is completely crushed by this outcome, and is placed in an asylum, where he continues his meaningless mathematical ‘experiments’.