Adina first appeared in Scribner’s Monthly during May—June 1874. This split across two monthly issues may account for the bipartite structure of the tale. Its next appearance in book form was as part of the collection of tales Travelling Companions published in 1919 by Boni and Liveright, New York. 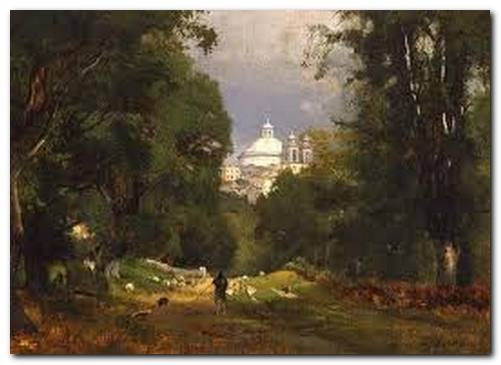 This tale has many elements of the medieval romance or the fairy tale which James had explored around this time (one thinks of Benvolio written the following year) – the discovered gem, the Italian setting, the young girl’s elopement. In fact James draws attention to this very aspect of the tale during his own narrative:

it ought to be out of a novel – such a thing as love at [first] sight; such a thing as an unspoken dialogue, between a handsome young Italian with a wrong, in a starlit garden, and a fanciful Western maid at a window.

And yet there are elements of structural detailing and thematic unity in the narrative of a kind which James would develop in his later tales which lift it above the ordinary romance. The tales has a deeply embedded narrative logic which lifts it above this plane

The story starts in Rome, where Scrope and the narrator are based. They ride out into the countryside and encounter Angelo – as it happens, near Albano, which will feature later in the tale. Quite apart from the issue of the topaz, they learn his name, where he lives, and the fact that his uncle is a clergyman. All of these details become important later in the story.

When Mrs Waddington takes fright at the prospect of the famous Roman fever, she decamps with Adina to Albano – which is the region south of Rome which includes the papal retreat – and also L’Arricia, which is where Angelo lives. Even though Scrope has taken advantage of Angelo, they are playing on his home territory.

Angelo thus has ready local access to pay court to Adina, and his own uncle on hand to effect the early morning marriage ceremony. The romance elements are there – but they are backed up by the sort of factual details in the tradition of realistic narrative fiction which was James’s natural milieu. Angelo and Adina even go to live in Rome after the marriage ceremony – which completes the geographic symmetry.

The most obvious feature in terms of artistic devices is Angelo and his full name – Angelo Beati – ‘blessed angel’ – because he does in the end triumph with the ‘prize’ of Adina, who he says in the end is the more valuable: “she’s worth more than the topaz”.

And when Scrope finally throws the topaz back into its historical origins in the Tiber, he is on the Ponte del Angelo, and we already know that Saint Angelo is the young Italian’s patron saint name.

There is also ironic prefigurement of the story-line in Scrope’s observation:

some knowing person would have got word of the affair, and whispered to the Padre Girolamo that his handsome young nephew had been guided by a miracle to a fortune, and might marry a contessa.

Angelo does exactly that – twice. First he attempts to impress his village girl friend Nietta with the few scudi he has gained – but nothing comes of it, because the reward is not big enough to impress her. But then he succeeds on a much bigger symbolic level by enchanting and marrying Adina.

This is the story of a pretty, wayward girl who breaks her promise to marry a serious though not good-looking man, and who runs off with a penniless, albeit handsome stranger. She is not dissimilar to the deaf-mute girl in Professor Fargo who suddenly runs off with a complete mountebank and charlatan. Adina is easily swayed – at first attracted to and even engaged to an ‘ugly’ classical scholar. But lured by only smiles, glimpses, and maybe the odd message from her window, she agrees to marry somebody she hardly knows.

Even though James was only just turned thirty at the time of the story’s composition, this is one of many of his works which offers a warning against women in general and marriage in particular. It is a theme which runs through many of the tales and into the ‘late phase’ of his greatest novels.

Part I
The inner narrator and his friend Scrope are in Rome, riding in the countryside, when they encounter Angelo, a handsome young man who has just found an old gemstone in the roots of a lightning-struck tree. Scrope buys it from him at what is obviously a low price. He rationalises his opportunism, but the narrator has reservations about the transaction.

Scrope cleans and polishes the stone,, which turns out to be a golden topaz, the personal intaglio of the Emperor Tiberius. He swears the narrator to secrecy about the discovery, who in turn advises him not to even reveal the matter to a mistress.

When Scrope’s cousin Mrs Waddington arrives in Rome, he falls in love with her step-daughter Adina. Mrs Waddington and the narrator cannot understand why a pretty young girl should fall for an unattractive man such as Scrope. When they all go to Christmas Mass at St Peter’s Scrope and Adina stay out late alone. Next day Scrope reveals that he and Adina are engaged.

The narrator walks out alone next day and meets Angelo, who is eaten up with anger over the topaz and the money, none of which has done him any good. The narrator offers to help him if he can.

Part II
Scrope agrees to meet Angelo, but when they do he refuses to pay any more for the jewel. Adina says she will not wear the topaz because Tiberius was such a cruel emperor. They all meet Angelo in the Borgese gardens. He is composed, but threatens to ‘hurt’ Scrope at some point as revenge for his unfair treatment.

Mrs Waddington and Adina de-camp to Albano The narrator visits them, and on his way back to Rome meets Angelo, who lives nearby. Later he meets Adina alone, praying in a church. She begins to act strangely, and Scrope confesses to the narrator that he is worried about her. When Adina suddenly breaks off her engagement to Scrope, the narrator suspects that she has somehow fallen under the spell of Angelo. He advises Mrs Waddington to leave Albano the very next day. But the following morning a note reveals that Adina has married Angelo and already left with him.

Some time later the narrator goes to see Adina and Angelo who live in Rome. Angelo is radiantly happy, whilst Adina is ‘pale and grave’. But she says she wishes to remain with Angelo and ‘be forgotten’ by her relatives. When the narrator reveals this state of affairs to Scrope as they stroll in the city centre, Scrope throws the golden topaz into the Tiber.