putting literary hypertext into the curriculum?

I remember first coming across hypertext in the early 1990s, and feeling that it was like a glimpse of a newly discovered world. Ted Nelson, Jay Bolter, and George Landow all became my heroes overnight. There wasn’t much you could do with it in those days, outside struggling with a few bits of proprietary software such as Hypercard. But as soon as we got the Web, HTML and the first browser (Mosaic: still got my copy) – we were away! 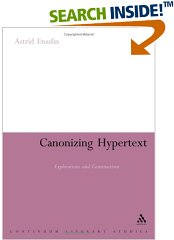 Some hyperfictions had been written at that time – and more have since: stories which exploit the possibilities of non-sequential narratives, hyperlinks between pages (or lexia), multiple navigation systems, and reader-generated choices. Astrid Ensslin thinks these creations deserve more attention. Indeed, she wants to argue that they should be included in the ‘canon’ of literary studies – and this is a book-length explanation of why that should be.

But along the way she takes in lots of other issues. the current state of hypertext writing; educational theories and policies; debates regarding the ‘canon’ of English literature; and IT skills in the classroom. It is something of an uphill struggle, because she is surrounded wherever she looks by a lack of evidence to support her claim or any enthusiasm for its implementation.

As a postmodern critic, she is sceptical about the very notion of a canon, yet she is eager to see examples of hypertexts included within it – seemingly oblivious to the fact that it takes a long time for any writer to be canonized. Even modern classics such as D.H. Lawrence and James Joyce were censored and banned before they became a part of Eng. Lit.

So in the absence of any hypertext in the canon of English Literature, she is forced to propose her own. These turn out to be the fairly well-known Michael Joyce (afternoon), Stuart Moulthorpe (Victory Garden) and Jayne Yellowlees Douglas (I Have Said Nothing). These are the ‘first generation’ of hypertext writers. There are ‘plot summaries’ so far as this is possible with non-sequential writing, yet even whilst making great claims for their work, she is curiously reluctant to quote from them to prove that these qualities exist. [I have checked out the work where it’s accessible, and I can tell you that there is nothing to get excited about.]

[As an aside, I simply cannot understand why so many of these writers imprison themselves within the confines of proprietary software (Eastman’s Storyspace) when the vast, free, and ubiquitous resources of HTML-based multimedia is open to them. Maybe it’s because Eastman also acts as a publishing house, and sells their products on its site?]

She then makes something of a swerve – into the realms of the philosophy of education – before getting back to hypertext in the classroom. There, to what should be nobody’s surprise, there is little evidence of its being used to its full potential, let alone being ‘canonized’. Ensslin huffs and puffs at length considering what could be done, what might be done, and what should be done about it. She even spells out the curriculum for a project she ran – and shows the results, which were ‘encouraging’.

Does any of this alter the potential of literary hypertext? I’m afraid not – because she ignores two very important factors. Number one – every day, millions of people are reading and writing hypertexts on blogs and Wikis (two terms which only crop up once in the whole book). Of course she would argue that the sort of hypertexts she has in mind are creative, literary, and fictional – whereas the majority of bloggers are writing non-fictional prose.

Number two – It doesn’t seem to occur to her that hypertext simply isn’t an appropriate medium for imaginative literature. This is because it lacks the features which readers value very highly in imaginative literary genres – a highly organised and very subtle sense of structure in the work. We like tightly organised plots, themes, symbols, and carefully articulated stories. These are what separate ‘literature’ from plain prose. Moreover, we have prized equally highly, since the middle of the nineteenth century, a subtly controlled point of view. This is not possible if the reader is genuinely free to take any route through a collection of documents or pages.

I have to warn you that she writes in a style which is designed to impress academic promotion committees – turgid, abstract, clotted with qualifiers, over-signposted, and dripping with ‘scholarly references’. At one point I began to suspect that the book might be an undeclared research project – perhaps a postgraduate dissertation or thesis.

Nevertheless, for anyone interested in the subject of electronic writing, hypertext, or experimental narratives, I think it’s worth grappling with the difficulties to get an up-to-date view on the issues.