Los Logos is arranged in four main sections: Pictorial Logos, Lettering, Typograms and Combinations. As well as hundreds of pages of beautifully laid out images, it also contains an interesting and informative introduction about the evolution of the logo. All the materials are presented in both English and German. It’s a collection of around 3500 logos from a wide range of contemporary designers including the likes of Buro-destruct, DED associates, Eboy, Rinzen and Woodtli. In terms of colour it’s interesting to note that the predominant choices fall into two groups. Pink, lime green, and peppermint blue crop up again and again for a twenty first-century hippy look. Orange, grey, and black do the same for the post-modern techno look.

There are lots and lots of company logos – though surprisingly few that I recognised. For me, the best part of the book was the section on typography as a logo design element. There are some very attractive typefaces one would like to see in more detail. For instance, there’s a very inventive font (reminiscent of Neville Brody’s work) illustrated simply by the slogan ‘mexico 686’ which has been sprayed on a brick wall.

It’s a very handsome publication, beautifully produced on good quality paper and top class printing. If there’s a weakness, it’s that we don’t get to see the logos in any context. It would be useful to see the products to which some of these logos were attached, or the materials on which they were printed.

This is the sort of compilation which provides a rich source of visual stimulation for designers, and it’s strongest point is the amazingly wide range of examples shown. There are attributions for all designs at the back of the book, but in keeping with the publisher’s persistent habit of information minimalism, it’s not easy to track them down.

history and development of iconography

As its title suggests, this study of iconography uses a structure of historical progression to argue that symbolic presentation has been “part of the collective subconscious of the human race since earliest times”. In the first part of the book Albertine Gaur compresses a great deal of cultural history and draws on an impressively wide range of ethnographic reference to argue the case. She starts with non-verbal scripts used as mnemonics, tallies, maps, and marks of ownership – many of which are still with us in the form of title brands, logos, watermarks, and seals. Then she deals with fascinating examples of number symbols, iconography in religion and art, and even the [possible] origins of phonetic writing. 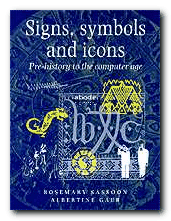 At its weakest this is not much more than a very elegantly illustrated list, with examples jumping from pre-Christian culture on one page to New York subway graffiti on the next. At its best, it is an example of a writer who can make her scholarship attractive, accessible, and inviting to her audience. Reading this filled me with a curiosity to look at her other work.

In the second part of the book Rosemary Sassoon teases out the layers of meaning behind the apparently simple term ‘icon’ – showing that it can stretch from a universal element [fire] to include words and even whole literary works:

we write letters but we read words. Words therefore become hieroglyphs or icons themselves. As an extension, in some cases and for some people, sentences, poems or whole works of literature (Shakespeare, for instance) or religious belief (the Koran) become icons in themselves.

The writing is full of wonderfully suggestive language – ‘cartouche’, ‘glyph’, ‘ideogram’, ‘pictographic’, ‘boustrophedon’ – and the subject is presented in a thought-provoking manner. But we are taken from one aspect of the subject to another without any firm sense of structure or reasoned exposition. For instance, we are dropped into an encomium of aboriginal iconography on one page with a claim that ‘no future iconography is likely to approach that level’ – only to then be rushed on to dingbats with no connecting argument.

This sense of fragmentation is exacerbated by the fact that the second part of the book in fact has several authors (who are only credited in the small print of ‘acknowledgements’ and marginal notes). There are two chapters on iconography and its relation to what are now called [in PC-speak] ‘special needs’. ‘Symbol systems for the visually impaired’ includes some fascinating material on alternatives to Braille, and ‘A new iconography for deaf signers’ discusses some socio-linguistic aspects of what can sometimes be quite a controversial topic.

A chapter on musical notation is not much more than a description of traditional craft methods, followed by an acknowledgement that what was once a laborious process can now be done easily using computers. It’s not until we reach Adrian Grater’s chapter on movement notation that we get closer to the IT element promised in the title. He describes in some detail the cognitive process of constructing a software program which can record the subtleties of dance in graphic form.

Sassoon comes in again at the end with an attempt to pull all the threads together – but by then it’s too late. The strength of this book is that it is packed with disparate and thought-provoking items – but that’s also its weakness. The illustrations are plentiful and excellent, and it’s obvious that the authors [editors?] have a strong purchase on an interesting subject. Maybe they would do it more justice to it if they narrowed the focus of their approach and spent longer explaining the case they wish to make.

More on writing skills
More on theory
More on typography