reflections on hypertext and story-telling

Janet Murray has an intellectual background which will be common to many who have passed through higher education since the 1960s. She is rooted in her training in the humanities (English Literature) – but she has been touched by developments in computer science, and wishes to combine the two disciplines. She holds simultaneously a deep reverence for post-Renaissance book-based traditional learning and an appreciation that digitised texts, non-sequential narratives, and multimedia effects might produce new artistic forms. Hamlet on the Holodeck is an exploration of what has been done to develop these new forms – and what might be done in the future. It is a study which has become a central text in the required reading on hypertext. As a teacher at the Massachusetts Institute of Technology – the home of research and development in multimedia – she knows the field well.

Her examination starts with a survey of science fiction and various modern narratives which explore the possibilities of parallel universes or alternative realities – including 3-D movies and virtual reality simulators. She describes the existing technology with enthusiasm – although in each case she ends up in the realm of ‘Imagine if this could be put to use in …’ rather than what has been done. But this is understandable. After all, we are considering an extremely new technology. When printing was first invented, books were produced which imitated written manuscripts, just as in our own age cinema and radio first imitated the live theatre. Maybe the new digital narrative forms have not yet emerged.

She discusses videogames, virtual dungeons (MUDs and MOOs) and literary hypertexts, including the best known – Michael Joyce’s Afternoon and Stuart Moulthrop’s Victory Garden. She also considers the advantages and weaknesses of Web-based narrative experiments. These include the complex worlds which are generated around TV soap operas for instance – which have archives of back footage linked to fan-generated materials.

The main problem is that she doesn’t really confront the most fundamental philosophical principle of fictional narratives. This is that consumers usually want and appreciate a series of events which has been artfully conceived and structured by somebody else. Such narratives represent, in no matter how diffuse a form, a distinctive point of view or perspective on the world.

There is much discussion of journeys through mazes, fantasy quests, dragon-slaying, and all the usual clichés of games with names such as Pong, Zork, and Doom. However, when it comes to predicting what the new forms might be, these tend to be simply different ways of telling the same story – multiple viewpoints – a strategy which has been adopted in most art forms, and which is not intrinsically connected to computers or hypertext. Her arguments and exposition seem more fruitful when she is discussing the rapidly merging world of the Web and television.

Her examination of current multimedia productions is wide-ranging and thorough, although there are one or two assumptions about what is likely to develop which seem open to question. The first is that computers will somehow participate in the generation of basic narratives. The second is that readers will be invited to participate in the story. The third is that a video games or MUDs are likely to be the most likely form to be developed. These are certainly interesting possibilities, but whether they are necessary elements of the new forms or not, only convincing evidence will tell.

However, these are reservations of a rather theoretical nature. At a practical level, anyone interested in the future possibilities of story-telling using computer technology should read this book. Its comprehensive survey of current practice is an inspiring starting point for what might be achieved in the digital future.

1. Narratives are accounts that describe a sequence of events. When answering questions which concern events in a sequence, you should avoid drifting into merely retelling the ‘story of what happens’. This is called narrative paraphrase. This feature often occurs in fiction, poetry, drama, history, film, politics, or anything else which involves events which take place over a span of time.

2. The temptation to retell the story will always be strong, for two reasons:

3. Remember that almost all essay questions require that you construct an argument which should be illustrated by evidence and examples drawn from your study materials. It is not enough merely to retell a story.

4. Select that one incident, character, event, or phrase which illustrates the point of your argument, then stop! You should resist the temptation to discuss ‘what happens next’.

5. If you discover on re-reading your essay that it is full of phrases such as ‘and then he…and then she … following this they … and then next they’ – something is likely to be wrong. Pick out the one point which provides the evidence you require, and eliminate the rest.

6. Obviously, if a question asks you to discuss a succession of events, you would normally deal with them in the sequence that they occur. Even in such cases however, you should keep in mind that merely recounting them as a narrative does not constitute discussion, analysis, or evaluation.

7. If the question asks you to analyse a series of events, you should split the account into its most important topics. Each one of these elements might be identified in turn – and then analysed. Resist the temptation to get caught up into the ‘story’.

8. Essays dealing with history or political issues of the past are normally and most logically written in the past tense.

Within six weeks of the revolution Cossack armies and other ‘white’ forces were already mustering in south-eastern Russia; the Ukraine, egged on by French and British promises, was in a state of all but open hostilities against the Soviet power; the Germans, in spite of the armistice, were a standing threat in the west.

9. Some people try to give a sense of vividness or urgency to their writing by re-casting narratives in the present tense. The result can seem modish and posturing. This should be avoided in academic writing.

Here is the last example, re-cast into what’s called the ‘dramatic present’ tense.

Within six weeks of the revolution Cossack armies and other ‘white’ forces are already mustering in south-eastern Russia; the Ukraine, egged on by French and British promises, is in a state of all but open hostilities against the Soviet power; the Germans, in spite of the armistice, are a standing threat in the west.

Pause and Effect examines the intersection of storytelling, visual arts, new media, and interactivity. It’s a mixture of a little theorising with plenty of practical examples. Mark Meadows starts reasonably well with some interesting reflections on narrative and perspective, and then plunges valiantly into the realm of literary narratives. But before giving himself time to consider them seriously, he’s off into Excel spreadsheets and interactive games. It’s a very elegantly designed book. Almost every page is illustrated with diagrams, screenshots, and paintings. 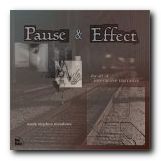 He ventures bravely into first, second, and third person narratives, plus point of view. Famous names come thick and fast – Homer, Aristotle, Dostoyevski, Giotto, James Joyce. We get reflections on novels, TV programs, video games, and Spiderman comics. But it’s hard to find a coherent argument. Most of what he has to say is descriptive rather than analytical.

This is a shame, because theoretical reflections on new media design would be very welcome – but here there is the sense of someone struggling with issues which even literary theorists have sorted out long ago.

He does look at some interesting examples of narrative art – religious paintings and tablets. But when you think about it, the traditional narrative painting is ‘cheating’ in terms of conveying a new story. Viewers of ‘The Annunciation’ already know the sequence of events when they see the depiction of them in two dimensions.

There are some interviews with designers of multimedia and interactive events, plus case studies which feature contemporary games designers. He also covers interesting reports of experiments which seek to blend digital genres. Probably the best part of the book however is where he offers reflections on narrative and architecture, second-person point of view, and 3D virtual reality.

This is a publication which will appeal to people who want to pursue ideas about narrative theory. Web designers and new media buffs will certainly pick up some new lines of investigation to think about.