Roman Fever (1934) is one of the most famous and frequently reprinted of Edith Wharton’s short stories. It first appeared in her collection of stories The World Over which was published in 1936. 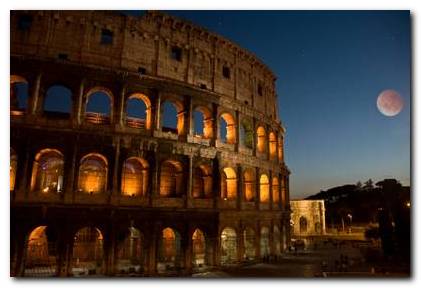 The Colosseum in moonlight

This story offers a satirical version of the theme treated by Henry James in his famous novella Daisy Miller. James’s heroine Daisy incautiously ventures out into the Colosseum at night, catches fever, and later dies. His story is one of unfulfilled promise and a life tragically foreshortened.

Edith Wharton’s use of the same scenario is lighter, more satirical, and it has a positive outcome in the creation of Barbara – who is mentioned but never appears in the story. Edith Wharton was a close friend of Henry James and knew his work well. In fact their literary styles are vaguely similar – though James focuses more intensely on the psychological complexities between his characters.

The Colosseum at Night

This image and mise en scene combines two cultural elements which contemporary readers might find puzzling. In the nineteenth century, European locations such as Paris, Rome, and Athens – anywhere south of the English Channel – represented places of general permissiveness and sexual license to visitors from Anglo-Saxon cultures. This included upper-class tourists from both Britain and America.

There was a great deal of what we would now call ‘sexual tourism’ which went along with the Grand Tour – and the levels of permissiveness increased the further south and east the journey progressed. Other works playing with the same theme include Henry James’s The Wings of the Dove (1902) and E.M. Forster’s A Room with a View (1905).

At the same time, female tourists on this journey would be expected to maintain the sort of standards which obtained in London and New York. Unmarried women would be chaperoned on all occasions, and certainly not allowed out late at night.

However, the excuse of seeing the Colosseum at night might give a single man and woman an excuse to be alone together – unsupervised. Hence the details mentioned in the story that special arrangements could be made to make the building accessible after its formal closing hours. Alida Slade reminds Grace that –

“It wasn’t easy to get in, after the gates were locked for the night. Far from easy. Still, in those days it could be managed, it was managed, often. Lovers met there who couldn’t meet elsewhere. You know that?”

Grace Ainsley met Alida’s fiancé Delphin Slade that night, and they had a sexual liaison that led to pregnancy. Her indisposition at the time was described as an ‘illness’, and within two months she was married to Horace Ainsley – just in time for the child (Barbara) to be passed off as a natural product of that union.

The two women have daughters Jenny and Barbara who are also friends. They have gone off with Italian aviators and will probably fly back by moonlight. In other words, the daughters are doing the modern equivalent of what their mothers did. Moreover, the daughters too seem to be in competition for the same man – the aviator who is a Marchese, the Campolieri boy who is ‘one of the best matches in Rome’.

The parallels even reach further back in family history. For when Grace Ansley’s great aunt was in Rome many years before, she was also in competition with her sister for the love of the same man, and sent her out on a night-time expedition for a flower – which resulted in the girl’s death.

Roman Fever (and other stories) – Virago edition – Amazon US

Part I
Alida Slade and Grace Ansley, two middle-aged upper-class American women are sitting on the restaurant terrace of their hotel overlooking Rome after lunch. They have known each other for many years, and their daughters (who are also friends) have gone out for the afternoon.

The two women compare their own youthful experiences of Rome with those possible for young women of their daughters’ generation. They are ostensibly full of sympathetic understanding for each other, but actually there is an understated competition between them in matronly feeling and virtue.

Part II
A great deal of their concern centres upon the traditional worry of catching fever in Rome as a result of incautious excursions in public after sunset. Alida Slade suddenly recalls that Grace Ansley once caught a severe chill in such circumstances many years before.

Furthermore, she knows that Grace went out to meet Delphin Slade in the Colosseum at night, even though he had just become engaged to Alida herself. She even remembers the exact words of the letter inviting Grace to meet him there – because as she suddenly decides to reveal, she wrote the letter herself.

It is clear that the two women were in competition for the same man. Alida claims that she wrote the letter as a sort of joke – so that Grace would turn up at the Colosseum and be left wandering around alone late at night, waiting for somebody who wouldn’t turn up.

But Grace reveals that she replied to the letter and she did meet Delphin Slade, and they did visit the Colosseum by night. The two women are forced to acknowledge the full scale of rivalry and animosity between them.

They then revert to a form of competitive and patronising sympathy for each other. But Grace plays her trump card by obliquely revealing that her daughter Barbara was the product of this one night’s romantic liaison.