>> Home / Archives for The Designer

fifty years of change in image, training, and techniques

Rosemary Sassoon is a distinguished authority on typography, writing, and education – with publications as diverse as Computers and Typography, Signs, Symbols and Icons, and Handwriting of the Twentieth Century. What marks her out from many other writers on these issues is that she tends to test her ideas in the classroom – either by designing fonts to assist children’s reading [Sassoon Primary] or researching how children learn to write. It was she who came up with the observation that the way children hold a pen has no relation to or effect on the clarity of their writing. 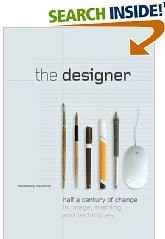 Her latest book is about the development and training of designers over the last half century. She begins just after the end of the second world war, when although design was harnessed to promote post-war recovery, designers were regarded as second-class citizens. The Festival of Britain (1951) did little to change matters, even though the exhibition was successful. Designers were labelled ‘commercial artists’. Now, fifty-odd years on, some designers are better known than [‘fine’] artists. How times change.

She considers the neglect of drawing skills in design training and sees this as a sad loss which began with the encouragement of ‘conceptual’ design in the 1970s – one which has accelerated with the arrival of computer-assisted deign (CAD).

Much of the evidence she produces for the changes in design education comes from interviews with professional designers and teachers who look back on their own educational history. Common themes include regret at the demise of the apprenticeship system; scepticism regarding the use of computers in the teaching of typography; regret that design students often avoid theory; and despair over class sizes which during this period have risen from 15-20 to 100+ – a phenomenon which results in such practices as ‘hot-desking’ and ‘elearning’ to cope with these numbers and spread scarce resources further and further.

The second part of the book is a series of essays on contemporary issues and prospects for the future written by distinguished practitioners. They reflect on their own professional development and the manner in which teaching design has changed all over the world in the last fifty years.

Then in the third part of the book (and I have to say its the best-written and illustrated) Rosemary Sassoon reflects on her own experience and practice as a designer. She went through quite a random but eminently practical training as a calligraphist and a textile designer. She gives a first hand account of what practical commercial design involved – working with different types of printing and reproduction, then negotiating with clients and sales representatives.

In a quite amazing career where one thing led to another, she became a regularly published writer on typography, a teacher, a government consultant on writing, with particular reference to children and stroke victims, and a book designer. And one supposes she will go on this way until one day she joins the Big Design Studio in the sky.