>> Home / Archives for The Patagonia

The Patagonia (1888) like many of James’s other stories, has its origins in an anecdote relayed to him over the dinner table – a story which he elaborated and refined. It is also his ‘response’ to a very similar tale by Anthony Trollope called The Journey to Panama which also features a young woman on a long sea voyage going to meet the man to whom she is betrothed. It’s also another variation on his Daisy Miller theme – the ‘new type’ of woman or the ‘self-made girl’ who pushes against the boundaries of social convention – at a cost to herself. 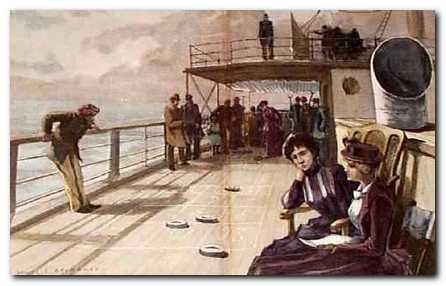 This story, like James’s other stories Daisy Miller and Pandora features a young woman of a ‘new type’ who flouts the conventions of socially acceptable behaviour established by members of the upper class. Grace Mavis is from a family in business class who live in a suburb of Boston for people who are socially aspirant. In fact her father has lost his ‘position’ and has become an invalid. Her mother seeks the social protection of Mrs Nettlepoint during the voyage from Boston to Liverpool – and can only do so with the recommendation of a mutual (and upper-class) friend Mrs Allen. Mrs Nettlepoint therefore feels she has a social obligation to protect Grace’s reputation whilst she is in transit to her husband-to-be.

But as the voyage begins, Grace feels free to behave as she wishes, and we ultimately learn that faced with the prospect of a marriage which she fears, she is affected by the romantic prospects that Jasper Nettlepoint appears to be offering her. She defies the conventions of restriction placed on an unmarried woman spending a significant amount of time in public with a single man. This at the time would be seen as behaviour compromising her reputation.

It’s possible to argue that Grace is a victim of New England rectitude, the viciousness of social gossip, and the shortsighted meddling interference of the narrator. As a middle-class girl she has few prospects of marriage other than the one offered to her when she was twenty. Because of her father’s redundancy and illness, the family’s fortunes have slid further downhill. She is on her way to the one poor prospect still open to her – marriage to the feckless David Porterfield.

In the spiritually liberating ambiance of a cross-Atlantic voyage, she is swept off her feet by the attentions of a rich and handsome younger man. But she is surrounded by gossip and intrigue. Mrs Nettlepoint wishes to protect her son from what she sees as a socially improper alliance (to a lower class woman). The narrator wishes to fend off Jasper’s attentions, unless he is prepared to accept the consequences – which would be to protect Grace’s reputation by marrying her. Meanwhile characters such as Mrs Peck fuel the dining room with minute by minute reports on Grace’s movements.

Grace has a passionate interview with Mrs Nettlepoint, defending her actions. But she is a single spirit battling against a much stronger social current. She realises that her temporary happiness will be taken from her, and she feels that what lies ahead will be like a living death (despite her protestations to the contrary). So she takes what she sees as the only way out – and jumps ship.

The Patagonia sails from Boston at the start of the story and arrives in Liverpool at the end – which neatly ties together the New World with the Old (America and Europe) which James was so fond of exploring in his tales and novels.

Part I. An unnamed middle-aged narrator calls on his friend Mrs Nettlepoint the day before they are due to sail from Boston to Liverpool on The Patagonia. Her son Jasper is not sure if he will accompany them or not. But when they are joined by the attractive Grace Mavis, who will also be on the voyage, Jasper suddenly decides to go with them. Grace, who is thirty, has been engaged for ten years to David Porterfield, a student of architecture in Paris, and she is going there to marry him – apparently with little enthusiasm.

Part II. On board, Jasper is very attentive to Grace, so much so that passengers begin to gossip about them. Mrs Nettlepoint even suspects that Grace might have designs on her son. All available evidence suggests that some sort of romantic relationship is developing between the two of them. The narrator and Mrs Nettlepoint are alarmed at this development. She feels maternally protective towards her son, and the narrator thinks that Grace’s reputation is being compromised. They feel that they should warn and reprimand the two younger characters.

Part III. Mrs Nettlepoint challenges Grace, who defends herself by saying that she is doing nothing wrong. When the narrator points out to Jasper that his behaviour is putting Grace in a socially invidious position, he is told virtually to mind his own business.

Part IV. Gossip about the affair continues, Jasper’s and Grace’s behaviour becomes erratic, but there is no resolution, until finally Grace jumps overboard in the middle of the night. The narrator is then faced with the difficulty of breaking the news to her fiancé who meets the ship as it docks at Liverpool.