>> Home / Archives for The Secret Sharer

The Secret Sharer (1910) is a popular and much-anthologized work by Conrad. It’s quite short, yet it presents an enigmatic narrative and the story has been interpreted in a number of different ways. Like many of Conrad’s other stories, it combines elements of his own experience as a seaman with events recorded as part of naval history. The story is set in the Malayan Archipelago (The Gulf of Siam or Thailand to be exact) which features in a similar work, The Shadow-Line, written a few years later.

There is a literary tradition of stories which deal with a theme known as ‘the double’. These are narratives featuring a character who feels the presence of, thinks he percieves, or sometimes even sees another character who has the same appearance or name as himself. The second character might succeed in society where the first character fails, or the second might perform some anti-social act for which the first character is blamed. Examples include Edgar Alan Poe’s Wiliam Wilson, Fyodor Dostoyevski’s The Double, and Vladimir Nabokov’s The Eye. For a further explanation this, see our tutorial on The Double.

Very often these stories are first person narratives in which it becomes clear to the reader that the second character does not actually exist, but is a projection of the narrator’s imagination – an ‘alternative’ personality, or ‘another self’ representing a fear or a wish-fulfilment.

The Secret Sharer is explicitly packed with the features of this theme. The unnamed narrator and Leggatt are of similar age. Both of them went to the elite sailor’s training school on the Conway. They are both bare footed when they meet. The captain gives Leggatt his own sleeping suit to wear, so that they look the same, and he puts him into his own bed. The captain immediately (and throughout the tale) refers to Leggatt as his ‘double’ and ‘secret self’. Leggatt was chief mate on the Sephora – and presumably the captain had previously been a mate before promotion to captain.

The two men echo each other’s gestures. The captain feels that they are both ‘strangers on board’. Leggatt is a stranger because he comes from another ship, the captain because he has so recently taken up his command. The captain refers to Leggatt as if he is looking in a mirror.

The story therefore seems to be variation on the double theme – and it is often discussed in such terms, particularly because none of the rest of the crew actually see Leggatt, and all information about him comes from the narrator, the captain.

This is a seductive interpretation, but it contains one major flaw. The fact is that other people in the story know that Leggatt exists. The captain of the Sephora, Archbold, comes looking for his chief mate who has escaped from the ship. So Leggatt is not a projection of the captain’s imagination, or an id to his ego. He actually exists.

There must therefore be some other means of interpreting the story, or providing an explanation for the events of the narrative.

There but for the grace of God …

Conrad often creates stories in which someone is presented with a moral dilemma or an existential crisis. This experience might also involve confronting ethically complex situations or other characters who have dared to cross the line between good and evil.

In Heart of Darkness for instance the narrator Marlowe is given the task of tracking down Kurtz, a man who has gone beyond acceptable limits in establishing his imperialist empire. Yet Marlowe, before he even meets Kurtz, is pre-disposed to admire his audacity. He asks his readers to empathise and imagine what courage it takes to break the rules of civilized society. Similar situations occur in Lord Jim and The Shadow-Line.

In The Secret Sharer we therefore have a situation where the young captain is confronted by another man of a similar age and provenance who has become embroiled in an ethically complex situation. Leggatt acts with the very best motive of saving the Sephora during a storm, and he is confronted by a weak captain and a malicious crew mate. He saves the ship, but kills his crew mate in doing so. In terms of maritime law he is guilty of a capital crime. This is an example of a good motive with a bad outcome.

But the young sea captain is entirely tolerant of Leggatt and his situation. He makes no criticism and acts instinctively to protect him from detection and capture. It’s as if he realises that he himself might have acted in a similar manner if he had been confronted by the same situation.

One can argue that the young captain acts out of class loyalty. Both he and Leggatt have come from the same training college, and the captain feels an instinct to protect his own kind. This is an interpretation which will not be popular with Conrad devotees, because it is an elitist position. And it is made even worse by the fact that at the end of the story the young captain does not appear to have learned anything.

The captain puts his own ship and the entire crew in great peril just for the sake of saving one individual from justice – something his maritime code of ethics would never condone. And yet the spirit of the narrative and Conrad’s attitude to the captain suggests a positive outcome to the story. The captain succeeds in steering clear of Koh-ring, and he feels that he has a closer relationship with the vessel he commands. This is a bad motive with a good outcome.

Interestingly, Leggatt saves the crew of the Sephora by his act of ‘setting’ a reefed foresail, but kills an individual in doing so. The young captain on the other hand does the opposite. He saves an individual (Leggatt) but puts his own crew in great danger by sailing so close to the Koh-ring island.

Part I. A young seaman has his first command to take a sailing ship from the Gulf of Siam (Thailand) back to England. Whilst becalmed during the night at the start of the voyage he takes on board Leggatt, another senior seaman who has escaped from a nearby ship. the Sephora, after killing a malicious fellow seaman during a storm. The young captain sympathises with Leggatt’s plight and conceals him in his cabin. Leggatt gives a reasonable explanation for his actions (which saved his ship) and the young captain continues to give him refuge.

Part II. When the captain of the Sephora comes searching for his escaped prisoner, he gives his own account of events. The crew of the young captain’s ship find his behaviour increasingly strange, but he continues to protect Leggatt. Both of them are graduates of the same training school, and the captain regards Leggatt as his ‘double’ or ‘alternative self’. After a number of number of near scrapes in being detected, Leggatt asks to be put off the ship when it nears some islands. He is willing to take his chance to make an escape. The captain takes a grave risk by sailing perilously close to an island, but in the end Leggatt slips away undetected and the captain sails on, feeling that he now has complete control of his ship. 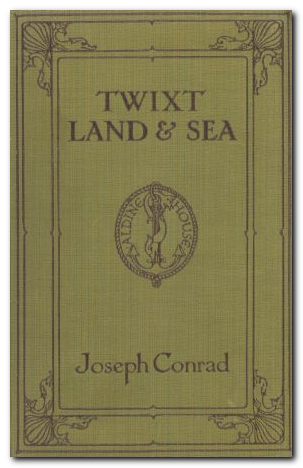 F.R.Leavis, ‘The Shadow-Line’, in Anna Karenina and Other Essays, London: Chatto and Windus, 1967.