FaceBook is both a media sensation and a mixed blessing. It has 500 million active users and half that number are thought to use the service every day. But some have found themselves out of a job or refused an interview when an employer checked through their unfettered postings or found ‘inappropriate’ photos in somebody’s albumns. It was originally a meet-up bulletin board system for college students, but like so many social media software programs it has outgrown its original purpose to become a major multi-purpose communication platform in its own right. The two authors of this guide are such enthusiasts for FaceBook that they argue it can be used as an effective marketing tool – and this is their quick guide which explains how to take advantage of the opportunities it offers. 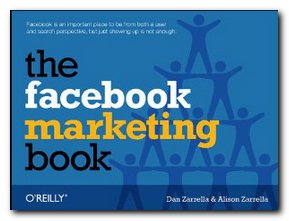 First of all they show you how to set up a account profile, and what the various configuration details mean in terms of advantages and potential dangers. (Some people have courted problems and even physical attack by revealing their full postal address for instance.) Fortunately, it’s possible to fine tune your privacy settings to control who sees what – but this requires time, effort, and a fine sense of discrimination in knowing which one setting might over-ride another. All of these wrinkles are fully explained.

After the basics of creating a profile they move onto something I would guess nine out of every ten FaceBook users don’t even realise exists – a ‘Page’. This is something that gives you the opportunity to display a product, service, or brand that you wish to promote. This is where marketing starts to get serious. And it’s followed by the even more powerful feature of FaceBook groups, which allow you to set up a topic or an activity for discussion among interested parties. These can be used to include mention of your own products or services – but the authors underscore the warning that this can easily be perceived as spamming, and even lead in extreme cases to being banned from FaceBook because it contravenes their conditions of service.

This is also true of the next major feature they discuss – FaceBook events which can be used when you wish to invite users to the launch of a new product, a movie or theatre opening, or even a birthday celebration. [This feature has also been used recently for the far more serious business of mobilising supporters in the Middle Eastern uprisings.]

FaceBook also has its own system of applications (apps) – small programs that can make your efforts more powerful or wide-reaching. Moreover it also gives you the wherewithal to design your own if you come up with a new idea for promotion or engagement. They also show you how to customise your pages, how to use the share and like buttons to good effect, and how to write content that is likely to be shared by your visitors and followers.

By the time you reach the section on managing promotional campaigns and analysing the results, you’ll see that it’s obvious FaceBook (rather like WordPress) has gone from a piece of social media software to a full scale platform which offers all the tools and possibilities of a commercial web site.

They make is all seem very easy and almost automatically successful – by repeatedly mentioning large figures (250 million viewers) and big brands (Starbucks, IBM, Coca-Cola) they give the impression that you can market your local dog shampoo service just as successfully. And maybe you can. After all, the whole thing is completely free, and success for you might be not millions of ‘friends’ but simply a buck shee advert that draws in a few more dog washes a week. You’ve got nothing to lose.