The Last of the Valerii first appeared in The Atlantic Monthly for January 1874. It was reprinted the following year in James’s first published book, The Passionate Pilgrim and Other Tales. It is sometimes included amongst collections of James’s ‘ghost stories’. 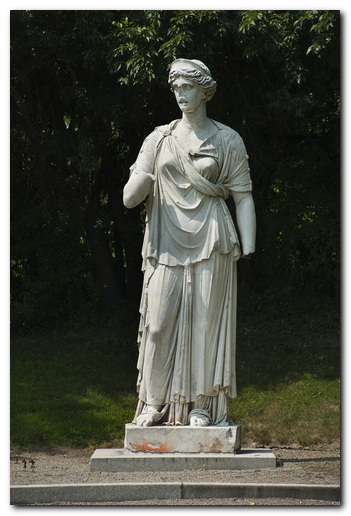 The Last of the Valerii – critical commentary

This whimsical tale is sometimes included in collections of James’s ‘ghost stories’ – of which he wrote several. He was quite prepared to give qualified consideration to various forms of the supernatural – ranging from the quite demonic intensity of The Turn of the Screw to the light-hearted Sir Edmund Orme and the almost farcical satire of The Third Person

No actual ‘ghost’ inhabits The Last of the Valerii but Marco Valerio explains to the narrator how strongly he feels his Pagan ancestry as a citizen of Rome. And of course Roman history was deeply Pagan for seven centuries before the arrival of Christianity, and it was also part of the Greek empire – something that Marco acknowledges in calling his unearthed godess ‘Greek’.

It is interesting to note that at the outset of the tale, Martha offers to change her religion to Marco’s, but he protests that he is not a ‘good Catholic’. This turns out to be true in that he is far more deeply moved by Paganism. It is a neat turn of irony, given the events of the tale, that she wishes to excavate old Italy, whereas Marco thinks it should be left alone. He knows where his history is – because he feels it inside of himself. This is a story of the pre-Christian Italian past casting its influence into the present.

The Last of the Valerii – study resources

The Last of the Valerii – read the original text

The Last of the Valerii – plot summary

The un-named narrator, an American painter, is in Rome where his god-daughter Martha is engaged to Count Marco Valerio. They offer to make sacrifices by changing religion for each other before the wedding. After the marriage the narrator is a frequent visitor to their antique villa. The couple seem idyllically happy, but the narrator finds the count emotionally empty, if polite.

Martha decides that she wants to excavate the villa’s grounds in search of antiquities, but her husband thinks that old things should be left in their place. However, when a statue of Juno is unearthed he is delighted. He becomes very possessive and secretive about the statue, and it is thought that he has confiscated a detached hand and regards it as a sort of holy relic.

Marco becomes distant from the people around him, including his wife. The narrator fears that some of Marco’s ancestral vices might re-surface, and he challenges him over his moodiness. But Marco insists that he is entirely sane and happy. Martha on the other hand is becoming increasingly unhappy.

Some time later the narrator meets Marco in the Pantheon and finds that he is deeply immersed in a form of neo-Paganism, which he sees as part of his historical birthright as an Italian.

Late one night the narrator comes across the Count prostrate in reverential worship before the statue. The excavation chief tells the narrator that such cases are common – because there are still traces of primitive belief amongst some Italians.

The narrator shares his concerns with Martha, who is sympathetic to her husband if only he will share his beliefs with her. When they go to see the statue, they discover blood on an altar that has been placed before it, and the Count is nowhere to be found.

The next day Martha and the narrator arrange for the statue to be re-buried in the grounds. This breaks the spell, and the count returns to normal, though he retains the detached hand as a memento of his relationship with the ‘Greek’ goddess.