The Shooting Party was first published in Harper’s Bazaar in New York and London in 1938, and was reprinted in A Haunted House published by the Hogarth Press in 1944. 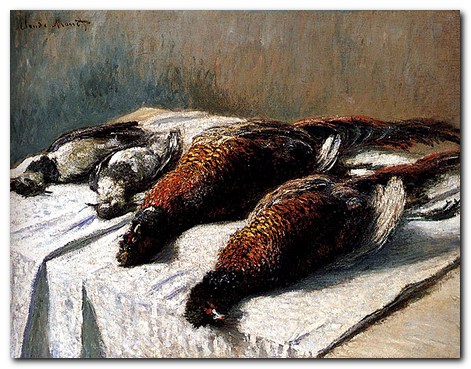 This is a devastating and at times almost exaggerated critique of upper class society. The house and its occupants are ageing and falling apart. The slaughter of the pheasants is an apt metaphor for the privilege and waste of a landowning class which has outlived its purpose in society. And the mindless brutality of the Squire is a comic parody of the military tradition of which he is part.

The complicity of this class with its servants is neatly illustrated by the fact that Milly Masters is knitting a jersey for her son, who may well be the illegitimate offspring of the Squire.

The parts of the story are also tied together by a number of recurring motives – the curled claws and the eyes of the pheasants and those of the women in the story:

Old Miss Rashleigh filled her glass. As they sipped their eyes became lustrous like half-precious stones held to the light. Slate blue were Miss Rashleigh’s; Miss Antonia’s red, like port. And their laces and their flounces seemed to quiver, as if their bodies were warm and languid underneath their feathers as they drank.

It is interesting to note that the story was originally composed without the opening and closing paragraphs concerning Milly Masters which ‘frame’ the central sequence. This speculation over the identity of a woman on a train is an idea Virginia Woolf used more than once. Milly Masters cannot be pinned down sociologically at the outset of the story, but by the end of the narrative her unfashionable clothes, her monogrammed suitcase, and the brace of pheasants she is carrying have all had their significance revealed.

The story begins as Milly Masters, a housekeeper, gets into the third class carriage of a train with her suitcase and two pheasants. The narrative immediately switches to the old country house where she works. Miss Antonia is waiting for lunch, whilst her brother, the Squire, is out in the grounds, shooting pheasants.

The luncheon table is set by servants, and she is joined by her elderly sister, Miss Rashleigh. Meanwhile, birds continue to be shot and piled up into a cart. Milly Masters finishes knitting a jersey for her son, then helps unload the birds from the cart.

The two sisters have lunch (of pheasant) whilst the shooting continues outside. The carcass of the bird they have eaten is thrown to their spaniel dog in the dining room.

They then fall into reminiscence and gossip as they drink their wine. They criticise their male relatives, from which it transpires that Milly Masters is probably their brother’s mistress. Whilst they are talking, the harsh autumn weather is causing damage to what is obviously a dilapidated house.

The Squire arrives with three hounds and begins to curse everyone. He then begins to lash out with a leather whip and causes Miss Rashleigh to fall into the fireplace, where the shield of the Rashleighs and a picture of King Edward fall onto her.

The story returns to the railway carriage where Milly Masters is described as an ordinary woman, but one whose eyes reveal ‘the ghost of a family, of an age, of a civilization dancing over the grave’.