Between the Acts was started in April 1938 and the first draft completed in November 1940 just months before Virginia Woolf died in 1941. Her husband Leonard Woolf decided to go ahead with publication in conjunction with his partner John Lehmann, editing the text only for spelling and minor errors. It had originally been called Pointz Hall and Woolf wrote it at the same time as dragging herself through the composition of the biography of her friend Roger Fry.

Between the Acts – critical commentary

For this, her last and posthumously published novel, Virginia Woolf returned to and developed further the narrative technique she had created for herself in Jacob’s Room in 1922. Any conventional notion of a continuous story or plot is abandoned in favour of fragmentary glimpses into the consciousness of various characters. These fragments are held together by the presentation of an aloof and rather witty narrator.

The narrative passes from one point of view to another via loosely associative threads and links, forming a pattern rather than a continuous chain. And into this pattern there are woven what Woolf herself called the ‘orts, scraps, and fragments’ which constitute human life.

The effect of continuity and apparent formlessness is intensified by the fact that Woolf abandons any formal divisions between the parts of her story: there are no chapters or any conventional breaks between the various parts of her story. You might also notice that the narration slips from the objective point of view of an author to the entirely subjective views of various characters and back again – sometimes within the same sentence.

As if to compensate for this apparently formless collection of fragments, there is a rich pattern of echoes and repetition which strengthens the construction as a whole. The characters speak and think in clichés, but the arrangement of their thoughts and utterances is like a densely patterned mosaic. Very often the dialogue echoes the narrative, and vice versa.

The large scale historic elements of the staged pageant are amusingly contrasted with the small scale individual drama going on amongst members of the audience. Isa is disenchanted with her husband Giles, and invents a romantic liaison with Rupert Haines the gentleman farmer, even though nothing at all happens between them except a few furtive glances. Meanwhile the angry Giles flirts with Mrs Manresa, the uninvited guest, by going off with her into the greenhouse.

There is also a recurrent theme of failed communication between the characters. People fail to remember the words of poems and songs; the actors forget their lines; other characters mis-hear what is said to them; and all in all there is sense of a failure of things to happen. The two oldest characters (Bart and his sister Cindy) mis-remember the past and fail to understand fragments of culture. Even Miss La Trobe feels that her efforts as a playwright have not been understood or appreciated by the audience.

It is true that members of the audience have entirely different interpretations of what the tableaux mean as a whole – but that is no reason that artistic creation should cease its efforts. As she consoles herself with a drink in the local pub, Miss La Trobe feels the stirrings of her next work take place in her imagination.

Between the Acts – study resources

Between the Acts – Oxford World Classics – Amazon US

Between the Acts – eBook edition

Between the Acts – Wordsworth Classics – Amazon US

Between the Acts – Kindle edition

Between the Acts – critical essays at Yale Modernism Lab.

Between the Acts – plot summary

On a day in June 1939 just before the outbreak of the second world war, a village historical pageant is held at Poyntz Hall, family home of the Olivers. Members of the family assemble for lunch whilst preparations for the event are made by villagers. The actions of almost all the characters are quite inconsequential, but their inner thoughts, feelings, and memories are sewn together by a narrative which creates links and patterns out of the fragments of mundane life to express a sense of community and continuity.

The pageant, written and directed by Miss La Trobe, is a series of tableaux showing periods of English history from the medieval age to the present, The first part is a prologue, recited by a child; the second is a parody of a restoration comedy; and the third is a series of scenes from Victorian life directed by a traffic policeman. At the conclusion Miss La Trobe presents a finale entitled ‘Ourselves’ by turning mirrors onto the audience.

When the pageant ends, the audience disperses wondering what it all meant. Miss La Trobe initially feels that her work has failed in its effect, but then she retreats to the local pub and has an epiphany of the birth of her next creation.

The Oliver family meanwhile settle back in the house at Poyntz Hall and the day draws to a close.

Between the Acts – first edition 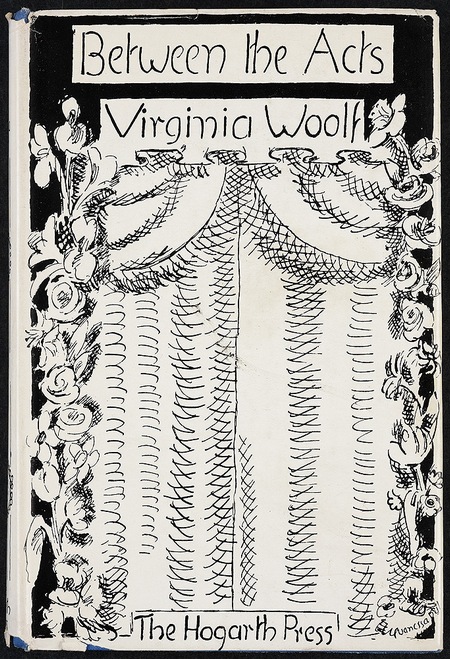 Mrs Dalloway (1925) is probably the most accessible of her great novels. A day in the life of a London society hostess is used as the structure for her experiments in multiple points of view. The themes she explores are the nature of personal identity; memory and consciousness; the passage of time; and the tensions between the forces of Life and Death. The novel abandons conventional notions of plot in favour of a mosaic of events. She gives a very lyrical response to the fundamental question, ‘What is it like to be alive?’ And her answer is a sensuous expression of metropolitan existence. The novel also features her rich expression of ‘interior monologue’ as a narrative technique, and it offers a subtle critique of society recovering in the aftermath of the first world war. This novel is now seen as a central text of English literary modernism.