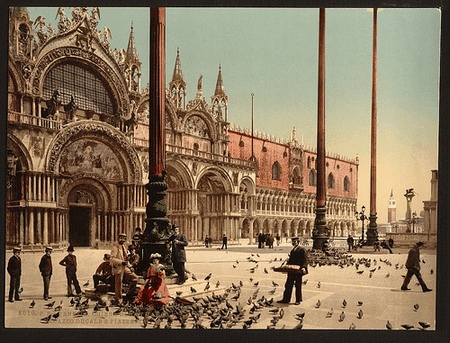 The crux of this story is a situation which has been used many times in late nineteenth and early twentieth century fiction. Indeed, James used it again in his tale The Solution (1888), and it forms the background to his famous novella Daisy Miller (1878).

The situation arises from the notion that the reputation of an unmarried woman will be sullied if she spends even a short amount of time unchaperoned by either a male relative or an older married woman or spinster. This notion rests on the retail value of the woman in terms of securing a favourable marriage. The notion originates in the upper class and the aristocracy who wished to form financially and politically advantageous liaisons strictly within their own class.

A young woman’s reputation had to be unimpeachable, because any previous liaisons she might have had could produce illegitimate children, who would have some claim on the family’s accumulated property and capital. And given the way that ideology works, this idea would percolate down in society, even to the lower classes who had no property or capital to conserve.

The further ramification of this convention is that any man responsible for putting a woman into a compromised position had a duty of honour to offer the woman marriage. Thus when Mr Brooke and Charlotte Evans innocently miss the last train back from Padua to Venice, they are forced to stay in a hotel overnight. This would be enough, under the prurient conventions of the time, to cast a shadow on Charlotte’s reputation.

It is noticeable that the incident is being talked about by people in the Venice hotel, and that Mr Evans on his return from Milan checks that Brooke has made a formal proposal of marriage to his daughter. Actually, Brooke has proposed before the incident, but Charlotte has refused him. She only accepts him later, following the death of her father.

Part I
Mr Brooke, an American, is making his first visit to Italy after years of living in Germany. In Milan cathedral whilst viewing Leonardo’s Last Supper he meets Charlotte Evans, a young American girl with her father. Later the same day he escorts Charlotte to view the marbles up on the cathedral roof. He is gushingly romantic in his appreciation of what he calls ‘Transalpine life’: she is more sceptical and reserved.

He then makes his way via Verona to Vicenza , where he meets a young painter who wants to sell him an old master sketch. The man’s family of aged mother and sickly young daughter spin him a tale of poverty and terminal illness. He buys the sketch, even though he knows it is not an old master, because the portrait reminds him of Charlotte.

On reaching Venice he meets Charlotte and her father again. He is very eager to be with her, but she suggests a three-day hiatus before continuing their relationship.

Part II
Mr Brooke and Charlotte go across to the Lido, where he decides to tell her about the painting and the fact that he is in love with her. She tells him that he is under the spell of Romanticism, and that she herself is in love with VeniceThey look at paintings together; he pays court to her; she keeps him at bay.

Then whilst her father is away in Milan, they go to Padua together. He speculates that the appreciation of art and churches might mean more to them if they were Catholics. They visit the Chapel of Giotto, then over ice creams she tells him that she lost her betrothed in the Civil War. They miss the last train and have to spend the night at an inn. He worries that her reputation might be compromised by this.

He begins to think that marriage would mean giving up the freedom to travel. Next day when they get back to Venice, Mr Evans wants an explanation for the overnight stay in Padua. Brooke proposes to Charlotte, but she refuses him again. Mr Evans double-checks that Brooke has made his daughter an offer of marriage.

Brooke goes on to Florence, Rome, and Naples. When he returns to Rome he meets Charlotte again, only to discover that her father has died rather suddenly. She now accepts Brook’s offer, and they are married.