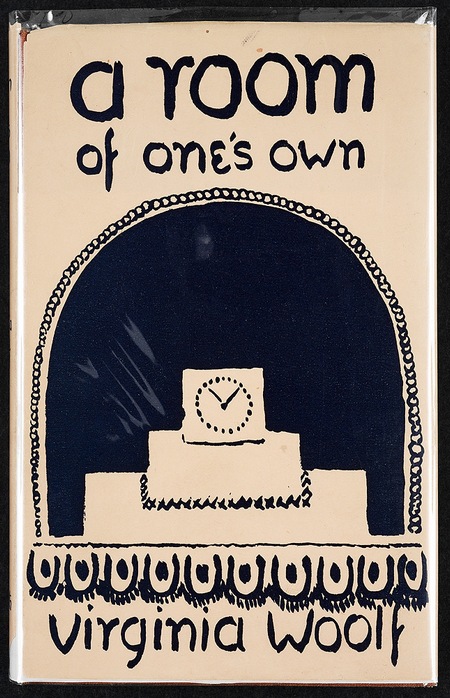 Virginia Woolf, A Room of One’s Own (1929) Cover design by Vanessa Bell.

This has become one of the cornerstone’s of feminist theory in relation to literature. It’s a sparkling, critical, and wide-ranging expose of male privilege and the way in which women have been excluded from cultural life. However, as John Willis argues in his study of the text, Woolf omitted to mention the work of other women writers on the same subject which had appeared prior to her own.

“There was more fiction than fact in Woolf’s most famous and beloved feminist polemic. The occasion was an address to the young women of Newham and Girton colleges on the subject of women and fiction, which she subsequently rewrote into the expanded form of the published book. Woolf’s form followed function. She created clever and pointed fictions before their eyes, inventing, among others, Shakespeare’s thwarted sister Judith and the young modern novelist Mary Carmichael. There were few facts partly because she presumed to dislike them and partly because the works on women containing the facts (all erroneous) had been written by men. Woolf chose not to recognise the existence of useful, accurate, and understanding accounts of women by women. Nor did she mention directly the achievements of women such as [Millicent Garrett] Fawcett, [Ray] Strachey, or [Margaret Llewellyn] Davis. Strachey’s The Cause: A Short History of the Women’s movement in Great Britain (1928) was a year old when Woolf created her story of her own room and an inheritance of £500 per year, yet there is only a brief quotation from it, identified in a footnote. Facts aside, the wit and irony of her writing, her satirical exposure of patriarchal attitudes, her leaps of intuitive understanding, [and] her subjective experience made the book memorable and influential.”

The first one hundred copies of [the first, limited edition] were for sale by the Hogarth Press, and the price was substantial. The Hogarth Press’s trade edition, issued at the same time, was priced at 5s; the print run was 3,040 copies. The press published a number of books that come at the same question of women’s lives and positions in different ways. One of particular interest is Life As We Have Known It (1931), a collection of autobiographical sketches of guildswomen, for which Woolf wrote an introductory letter.