Collaboration was first published in The English Illustrated Magazine for September 1892. It next appeared in the collection of Henry James tales The Private Life published in London by Osgood McIllvaine in 1893. The other stories included in this volume were The Wheel of Time, Lord Beaupre, The Visits, Owen Wingrave, and The Private Life. 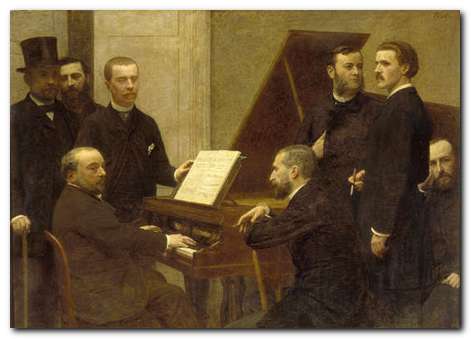 An un-named American artist living in Paris holds regular soirees for his friends, who are poets, musicians, and critics of various nationalities. There is rivalry and contention on nationalistic and aesthetic questions such as ‘the novel’ and ‘artistic temperament’.

The French poet Vendemer likes the music of the German composer Heidenmauer, who reciprocates by liking the Frenchman’s poems. Heidenmauer sets some of the poems to music, which impresses the author. As a result Heidenmauer then asks Vendemer to collaborate with him on an opera, an offer which he accepts. Vendemer believes that Art knows no patriotism or boundaries.

The narrator is reproached by ultra-patriotic Madame de Brindes for encouraging this collaboration. Having lost husband and relatives during the Franco-Prussian war of 1870—1871, she is inimical to all things German. Unless the collaboration is stopped, she will call off the engagement of her daughter Paula to Vendemer. She appeals to the narrator, asking him to persuade Vendemer to cancel the project – but his attempt fails.

Heidenmauer and Vendemer go to live together in Italy, short of money but fuelled by their creative enthusiasm. The engagement is called off as threatened, and yet Paula plays Heidenmauer’s compositions at the piano. The narrator sees this as the triumph of Art over prejudice.

This tale is hardly more than a sketch or an anecdote. James clearly sides with the argument that ‘art knows no boundaries’. Although he was obviously sensitive to national temperaments and schools of art, about which he wrote a great deal – see French Novelists and Poets for example – James was a committed internationalist. He was after all born in the United States, educated largely in Europe, lived in England, France, and Italy for most of his adult life, and eventually took up British nationality as a symbol of solidarity during the First World War – at a time when America was maintaining its isolationist position of non-interference.

He also believed that the practice of the arts was a high and noble calling – though this story is unusual in having a musician as one of its principal characters. More usually, his artist figures are writers or painters. It is also relatively rare for him to create sympathetic characters in his work who are German.